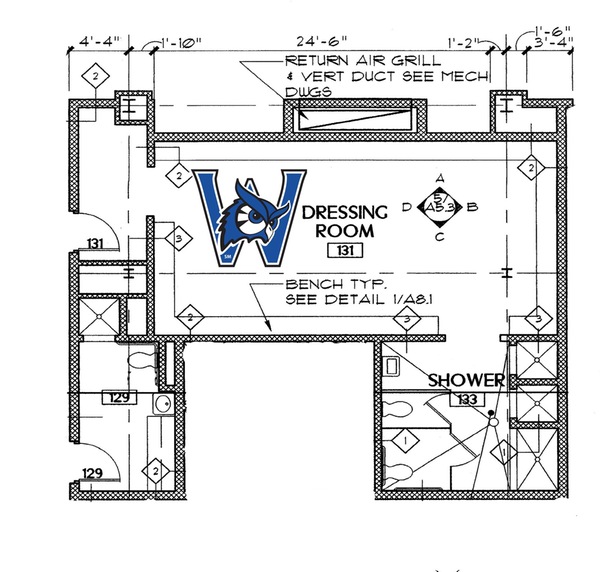 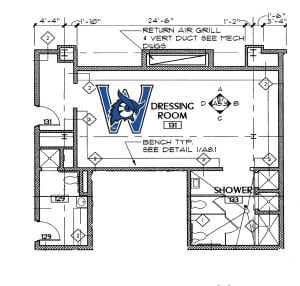 WESTFIELD – Westfield State Athletics has announced a campaign to outfit a new hockey locker room for the Owls’ varsity program.
Westfield State recently reached a license agreement with Amelia Park Arena in Westfield for a dedicated locker room for the Owls’ varsity ice hockey program.
“This is a great step forward for our men’s ice hockey program,” said Westfield State Athletic Director Richard Lenfest, Jr. “Since we returned the program to varsity status in 2008, a lot has changed in intercollegiate ice hockey and having a dedicated space for the team had become a priority.”
“It has been a long time coming”, said Kevin Chrisanthopoulos, President of the Board of Trustees for Amelia Park Ice Arena. “Our facility has always had a great relationship with WSU athletic programs, and this partnership further solidifies that relationship and finally provides their varsity hockey program with a dedicated locker room. I’m proud that we were able to finally make this a reality.”
Westfield State hockey alumni banded together in the early and mid-2000’s to form the “Blueliners Club” which supported the fundraising effort which restored hockey to varsity status in 2008 after an 18-year hiatus.
Current Washington Capitals head coach Peter Laviolette is a 1986 graduate of Westfield State and was a four-year member of the Owls hockey team, who helped lead the first Blueliners campaign. Laviolette has already lent his support to the new fundraising effort, recording video message to his fellow alumni to start the campaign.
“I can tell you, being a coach, there’s nothing like having a locker room – it’s a sense of home and a sense of identity for your team to come in and be a part of,” said Laviolette. “It will benefit the current players and be a tremendous recruiting tool for incoming players to continue to push Westfield State hockey into an elite MASCAC team.”
“We are lucky and grateful to have Coach Laviolette in our corner as an alumnus,” said Westfield State men’s ice hockey coach Bob Miele, “and to have the support of all the alumni who have come through the program. They know how important this is for us to continue to improve our hockey team,” said Miele, who has been the team’s head coach since 2009 after serving as an assistant coach in the team’s return season.
“One of the first questions players ask when we are recruiting them is about the rink and the locker room,” said Miele, “this will definitely be a new feature for our program and will help tremendously.”
“Amelia Park has been our home since 2008,” said Miele. “The new room will really give our program a home atmosphere and home ice advantage as well.”
“I’d like to thank the Amelia Park board of trustees, including board president Kevin Chrisanthopoulos, facilities chair Don Goodreau, and arena general manager Bruce Landon in all their efforts in reaching an agreement that benefits our ice hockey team, and creates additional locker room space in the arena,” said Lenfest. “We had discussed options with the rink management for quite some time in making this agreement a reality.”
“Our men’s ice hockey program, led by coach Miele, recruits qualified student athletes from not just New England, but all over the U.S., and international players as well,” said Lenfest.
Westfield’s 2019-20 roster featured players from nine different states, Canada, Czech Republic, Finland and New Zealand.
The Owls finished 12-10-5 overall in the 2019-20 season and advanced to the semifinals of the Massachusetts Collegiate Athletic Conference tournament.
Owls’ alumni Dennis Zak ’11, Vince Perrault ’14 and Jackson Leef ’17 were each named named as MASCAC player of the year during their tenure in Westfield. Multiple Owls have signed minor-pro contracts after playing at Westfield State, highlighted by Leef, who has played several seasons in the ECHL and earned a call up to the American Hockey League in 2018.
Amelia Park Arena is located at 21 S. Broad St. in Westfield, less than three miles from the Westfield State University campus. The main arena is a 47,000 square foot facility that includes an NHL-sized ice rink with a capacity for over 1,000 spectators for hockey, five large team rooms, three conference/party rooms, skate rental, and concessions. The facility was built in 2000 by late philanthropist Albert Ferst, in memory of his wife Amelia. Throughout their lifetimes, the Fersts made it a priority to give back to the community, especially the youth, in providing positive opportunities.
The Owls will take occupancy of the team locker room for the 2020-21 season, once construction is complete on the new locker room five at Amelia Park. Westfield State hopes to complete improvements in the room in the summer of 2021.
For more information on the locker room project, or how to contribute to the campaign, please contact Dave Caspole, Associate Athletic Director for External Affairs at 413-572-5433 or [email protected] or Major Gifts Officer Marnie Dacko at 413-572-8648 or [email protected] – Courtesy of Westfield State University Sports