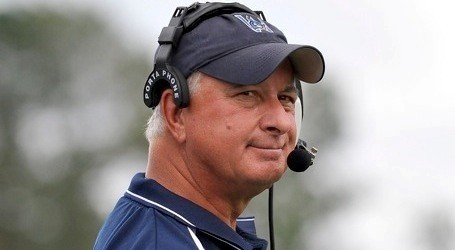 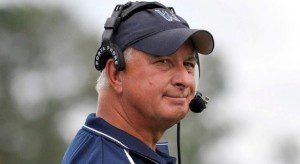 WESTFIELD – Westfield State (Mass.) University long-time football head coach Steve Marino has announced his retirement, effective the end of the 2013 season.
Marino, completing his 24th year at Westfield State, will be coaching his final home game this Saturday, Nov. 2, when the Owls host Fitchburg State. Westfield concludes the 2013 season with road games at Worcester State (Nov. 9) and Western Connecticut State (Nov. 16).
“Steve Marino has been synonymous with Westfield State football for 24 years. I want to thank him for all the time and dedication he has given to our student-athletes and the program,” said Westfield State athletics director Richard Lenfest. “Steve is a class act who put in an enormous amount of time and effort to make Westfield State football a successful program, and you don’t see a lot of coaches stay at one institution for 24 years. He has set the standards for our program, led the team to an unbeaten season and an NCAA bid, and has recruited and coached players who have written and re-written our record books. It’s been a real pleasure to work with Steve for the nine years I have been at Westfield State.”
“I want to wish Steve, his wife, Betsy, and his family the best going forward. His entire family has been dedicated to our program through the years and I know that he, and they, will both enjoy the new-found time that they will be able to spend together during the football season,” Lenfest continued.
“I can’t believe it’s been 24 years, the time flew by,” said Marino. “It was a hard decision and I am going to miss coaching, especially on Saturdays, but it’s the right time for me to do it. I am looking forward to spending more time with my family and grandkids.”
Marino, 64, has the third longest tenure among active coaches in New England Division III football, trailing only Springfield College’s Mike DeLong (31 years) and Worcester State’s Brien Cullen (28 years). The Owl mentor has been roaming the sidelines for 24 of the 32 years that Westfield State has fielded a varsity football team. He has coached 232 games with a record of 118-113-1, highlighted by three consecutive New England Football Conference championship game appearances in 2001, 2002, and 2003.
“Coach Marino put competitive teams on the field each year,” said Lenfest. “Westfield State and New England football are going to miss him.”
Marino guided the 2001 Westfield squad to its first and only perfect regular season, a 10-0 record. The Owls won the New England Football Conference championship and qualified for the NCAA Tournament.
During the special 2001 season, Marino was selected the American Football Coaches Association Northeast Region Coach of the Year, the New England Division II/III Coach of the Year, and the Gridiron Club of Greater Boston Division II/III Coach of the Year.
Marino was named the Westfield State head coach in the spring of 1990.
“I have a lot of fond memories of my time spent at Westfield State,” he said the day he was hired to coach his alma mater. “The college gave me a lot and I feel I owe it something in return.”
Marino received his B.A. degree in 1971 and his master’s degree in 1978 from Westfield State. He taught English at Ludlow High School for 29 years, then moved into an administrative post as dean of students for five years before retiring in June of 2006.
Marino’s coaching career spans a total of 41 years. The 1967 graduate of Springfield Classical High School coached football at Ludlow High School for 16 years, including an eight-year stint as the head coach from 1979-86. He served as defensive coordinator at Western New England University in 1987 before returning to Ludlow as an assistant in 1988.
“I loved coaching at Westfield State,” said Marino “I am going to miss the kids and I am going to miss the coaches.”