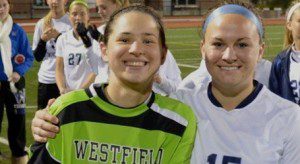 WESTFIELD – Keene State College scored two goals in a 10-minute span late in the game to rally for a 2-1 victory over Westfield State University in women’s soccer non-conference action on Wednesday night, Oct. 30.
The Owls of Keene State upped their record to 14-4-1, while the Owls of Westfield State dropped to 10-6 and saw their five-game winning streak snapped in their final regular season home game on Senior Night.
Westfield took an early 1-0 lead when junior Sarah Sypek scored her team-high 13th goal of the season. Sypek was awarded a penalty shot 37 seconds into the game after being taken down in the box with her back to the net. Her penalty shot was blocked by Keene keeper Victoria Crenson, but Sypek gathered the rebound and calmly placed the ball inside the right post to give Westfield the early lead.
Keene evened the score in the 77th minute when Jessica Berthiaume tallied her team-high 11th goal of the season. Kristen Huckins ignited the game-tying goal with a wicked cross shot off the left post. Beverly Cole redirected the missed shot to Berthiaume near the left post for an easy open net goal.
Kara Pavlidis scored the game-winning goal with 3:29 remaining on a shot into the upper right corner after receiving a nice pass from Hayley Kenyon. Pavlidis is Keene’s second leading scorer this season with 16 points (7 goals, 2 assists).
Keene outshot Westfield, 17-9, including a 9-6 edge in shots on goal. Keene also led in corner kicks, 4-0.
Westfield goalie Jess Habif had seven saves and Crenson finished with five stops.