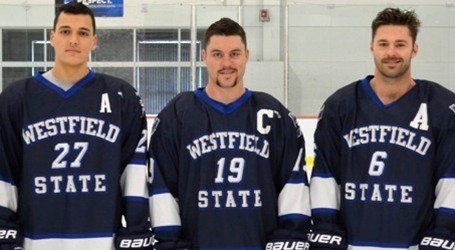 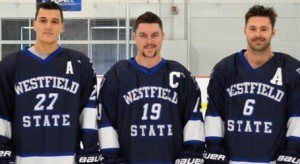 WESTFIELD – The Westfield State University men’s varsity ice hockey team begins its 2013-2014 season on Friday, Nov. 1, when it plays local rival Western New England University in the Sixth Annual Falcons Cup game at the Mass Mutual Center in Springfield. The Western New England-Westfield game is being video streamed live. at www.mascac.tv. There is no fee to watch the game with Westfield State students Mike Drew and Matt Stover providing the play-by-play.
The game begins at 3:30 p.m. and advanced tickets can be purchased for $12 per person at the Westfield State athletics department, with a special discounted rate of $6 per student for the first 125 Westfield State students. The special rate $12 tickets also will be sold at the Mass Mutual Center ticket booths until the end of the first period of the Westfield-WNE game this Friday. After that the ticket price jumps to regular $20 rate.
The ticket is also good for the Springfield Falcons game later that evening vs. the Hartford Wolfpack at 7:00 p.m.
“We are very excited to be playing for the Falcons Cup once again,” said Westfield State head coach Bob Miele. “This is an excellent opportunity for both teams to showcase their skills to Western Mass. hockey fans and to play in an outstanding facility.”
Westfield State has captured the first five Falcon Cup games by scores of 5-2, 5-4, 5-4, 4-2, and 4-3.
The Owls’ home opener at Amelia Park Arena in Westfield is Tuesday, Nov. 5, when they host Assump[tion College at 7:35 p.m.