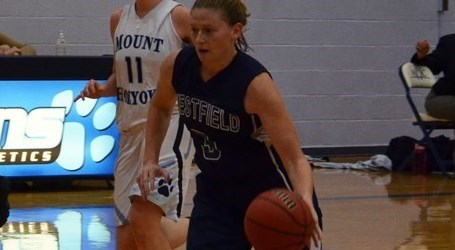 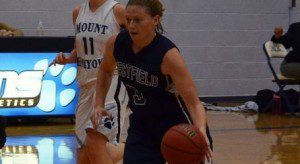 WESTFIELD – Eleven players scored for Westfield State, led by Jen Ashton’s (Beverly/Beverly, Mass.) 16 points, as the Owls rolled past the Lasell College Lasers, 72-41, in a non-conference women’s basketball game at the Woodwood Center on Thursday night.
The Owls jumped out to a 38-12 lead at the half behind a balanced scoring attack, that saw nine points from Ashton, eight from Keri Doldoorian (Sutton/Whitinsville, Mass.) and seven from Forbasaw Nkamebo (Amherst/Amherst, Mass.).
Westfield State pushed the lead to as many as 31 in the first 4:02 of the second half, leading 50-19 after an Ashton three-pointer.
The Lasers made a brief run, using a 13-1 spurt over the next 4:40, fueled by seven points from Deanna Barrett (Berlin/Berlin, Conn.), cutting the lead to 51-32.
Westfield re-rallied over the final 10 minutes to regain the final margin of victory.
Nkamebo and Doldoorian each added 12 points. Nkamebo grabbed a game high nine rebounds as well. Westfield improves to 3-2 on the season.
Lasell was led by nine points each from Breanna Cashman (Norwich/Norwich, N.Y.) and Katie Stopera (Hollis-Brookline/Hollis, N.H.). The Lasers fall to 2-3 with the loss.