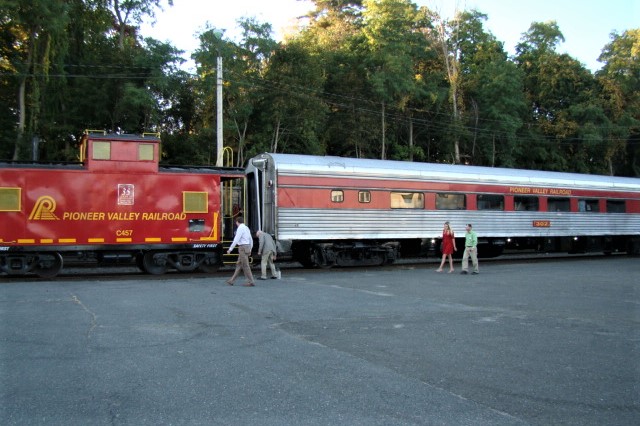 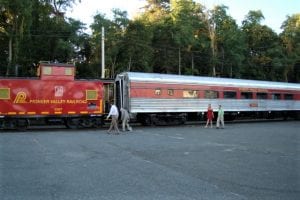 Pioneer Valley Railroad passengers board the dining car in Westfield this week for an appreciation ride. (Photo by Amy Porter)

WESTFIELD – On Tuesday afternoon, customers and friends of the Pioneer Valley Railroad were treated to a short ride on a 1940’s-era dining car, for a customer appreciation meal and tour.

Pioneer Valley Railroad, owned by the Pinsly Railroad Company, is a short line freight railroad between Holyoke and Westfield that hauls stone, lumber and steel, among other products including salt and sand, cat litter and beverages.

Levine said they use the dining car for special events for customers and charitable events, such as the Santa train in December that carries Santa to the Merry-go-Round in downtown Holyoke every year. 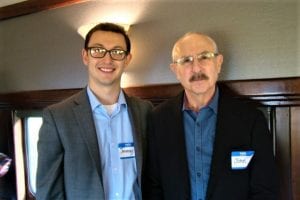 For Levine, the Pinsly Railroad Company is a family business, founded in 1938 by his grandfather Samuel M. Pinsly, and afterwards run by his mother. His nephew Jeremy Levine, a business analyst with the company was also on the train, celebrating his 23rd birthday.

Levine said the company moved to Westfield in 1986, shortly after purchasing the Pioneer Valley Railroad; first as a tenant in the Tighe & Bond building before moving to its current location behind the Westwood building at 84 North Elm St.

“Westfield’s been a great place to be,” Levine said.

“They are good partners with the community,” said state Sen. Donald F. Humason, Jr., who also attended the event. “This is the way to keep trucks off the road. For every train car of the Pioneer Valley Railroad, three or four trucks are off of the city streets,” he added. 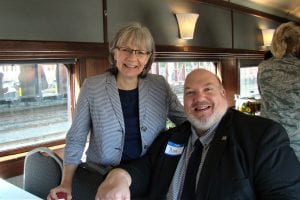 Pinsly Railroad Co. President Tom Owen took the analogy even farther. He said rail cars carry four semi-loads each, and Pioneer Valley Railroad runs 6,000 to 7,000 railroad cars per year, equaling 24,000 to 28,000 trucks off the road.
“We can haul one ton of freight 438 miles on a gallon of diesel,” Owen said, adding, “From a policy standpoint, it’s a very green way to deliver product,” he said.

Among the customers on the train was Ingrid Battaglia of Williams Stone, which has a quarry in Elberton Georgia, and two quarries and a manufacturing plant in East Otis that manufacture curbs, custom-made bridges, dimensional stone buildings and steps.
Battaglia said Williams Stone uses freight lines to bring raw material up from Georgia to Westfield using the Pioneer Valley and CSX railroads, which is then trucked to East Otis. 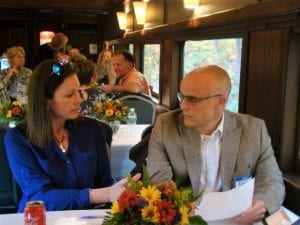 “Cost advantage. We used to truck everything. It’s cost effective,” Battaglia said when asked why they use the railroads.

With railroads being private, PVRR and CSX work together seamlessly, said Owen, with a single bill and a single point of contact. “It’s going well,” he said.

Owen explained that the 1980 Staggers Act deregulated the railroads, which were previously controlled by the government and failing. After allowing a free market, companies invested in infrastructure, and were able to bring production up and costs down.

The short ride on Tuesday began with a safety briefing. “We also begin and end every day with safety,” said Owen, adding that safety is PVRR’s number one priority. “One of the main things we’ve done is working with the city on safety,” he said. 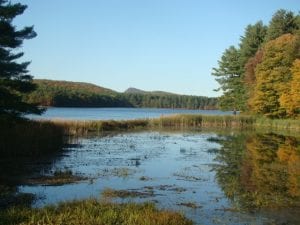 The train stopped at Ashley Reservoir in Holyoke to admire the view. (Photo by Amy Porter)

As the train traveled slowly, it was pointed out where the track branches off toward Southampton and Easthampton, and the other continues to Holyoke. Owen said a lot of Westfield customers are served on the line.

Before returning to Westfield, the train paused for a few minutes alongside the Ashley Reservoir in Holyoke, where people could be seen walking the trails to enjoy the fall foliage. They also stopped to take pictures of the dining car.