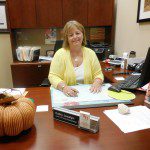 WESTFIELD – Catherine Jocelyn, vice president of marketing for Westfield Bank, brought a proposal to the Planning Board on Nov.16 for an intermittent, moving electronic sign at the bank’s 300 Southampton Road location

Jocelyn said the bank is looking for more functionality. “This is our first foray into a digital sign. We’ll have one in Westfield, one in Springfield. We’re very excited,” she said.

The sign will have a series of six digital slides with three different messages; including a community message, date and time, and product message, and will adhere to Westfield Bank marketing standards. Jocelyn said bank members of the marketing team have taken a series of training on digital signage, and will be looking to include industry best practices.

The team requested a 5-second duration for each slide, saying that each would take approximately two seconds to read. When asked if they studied safety issues with the time change, they said there is no documentation of a digital signage causing accidents.

“If my memory serves me correctly, we have had a 60 second time change on these signs. This is 5 seconds,” said vice-chair Cheryl Crowe.

City Planner Jay Vinskey said that the Polish National Credit Union was the first permit for an electronic sign granted by the board, which allowed static messages every 60 seconds. Then they permitted Walter Drenin of Drenin Financial Services to put up a flag waving on a sign on South Maple. “It’s evolving over time. Those were 60 seconds,” Vinskey said.

“I have no issue with the sign, just what you want to do with the time,” said Planning Board chair William Carellas.

“Why do you want the message to change every 5 seconds,” asked Jane Magarian.

“I think for the type of messaging that we’re doing, 60 seconds is a lot of time for something that can be read in 2 seconds. When Pat went through the training and we looked at the analysis of it, it’s more the norm to have 5 to 10 seconds in between messages,” said Jocelyn.

Westfield Bank consultant John Bonini asked if the board would be willing to consider 10 seconds between changes, which he said is the MassDOT recommendation, to which the board responded favorably.

Vinskey said the board may want to understand if there’s any animation proposed for the sign, and Magarian said she would not want to see characters jumping up and down.

Bonini said they are not planning on using animation right now, but said the other bank in Westfield is advertising car loans with animated cars driving through the sign. Vinskey said that is not allowed under their special permit, but is an enforcement issue, not for the Planning Board.

“You wouldn’t see characters jumping up and down, but animation is a part of marketing. It would not be our intention to just have animation; it would be more a message with animation to that. It wouldn’t be cartoonish, it would be a messaging plece,” Jocelyn said.

After further discussion, Carellas said he is opposed to animation. He acknowledged that Westfield Bank runs a first class operation, and he has no issue with the sign and no issue with drop-in static messages. “I’m concerned about the sign after that, and the one after that. I’m just really concerned with animation, especially on Southampton Road,” he said.

John Bowen agreed that there seems to be a progression. “This is our third sign. Each time we’re getting more lax. I think it’s too early for animation,” he said, to which the board agreed.

Vinskey said according to the new lighting ordinance, lit signs citywide can only be illuminated during hours of operation, or until 11 p.m. Jocelyn said they would need to have the top part of the sign that says Westfield Bank lit at night, as the new sign is replacing a sign with the bank’s name that stays lit all night.

Vinskey said the ordinance is under the Zoning Board of Appeals, and the Planning Board has no authority to make that decision. He said other signs that are ilt all night, if not during operating hours, were grandfathered in before the new sign ordinance three or four years ago.

The board voted to approve a ten-second change between messages, with no scrolling, or flashing, or animation, and illumination levels dimmed at night. Permission to have the sign lit after 11 p.m. would have to go to the ZBA, Vinskey said.

A Special Permit was also granted to Christine Gustafson of 9 Michael Drive for a home-based bakery.

Gustafson said it would be a part-time venture, as she works part-time for the city. She will be making special cakes and puffed pastries ordered in advance that people will pick up at her house. She said usually people pick them up on weekends in the morning, or by 6 p.m. at night. She said she is looking to buy a bakery in the future, so the home business would be short term.

The board voted to approve a five-year permit for a home-based business for pre-ordered baked goods, open seven days from 8 a.m. to 9 p.m., with no signage, and no restaurant.