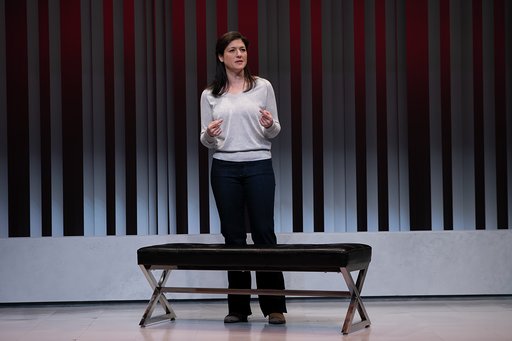 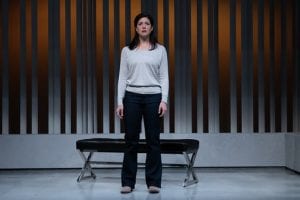 Tara Franklin in On The Exhale. (Photo by Andrew Greto)

Good theatre entertains and educates. It may introduce you to a new concept or idea. Great theatre takes it a step further. It forces you to re-examine or question your values. After seeing American Son, a powerhouse of a play about racism, racial profiling, and privilege, at Barrington Stage, my theatre partner and I debated and questioned our feelings for days. I still think about American Son, and I’m glad it’s coming to Hartford’s TheaterWorks next season.

On The Exhale, Martin Zimmerman’s play about gun violence in America, is another example of great theatre. It seems that school shootings and gun violence hit every news cycle, and we’ve become sort of numb each time we hear of the next incident. Not a day goes by when we’re free of unnecessary mayhem at the hands of a shooter. Zimmerman’s play, a 70-minute monologue delivered by the extraordinary actress Tara Franklin, comes at the subject rom a different perspective.

In her first attempt at a solo performance, Franklin plays a liberal college professor and single mom, whose son is the victim of gun violence in a school shooting. Obsessed by how her child spent his last minutes, the professor researches the crime, learns to fire an assault weapon, and questions her values on the volatile subject of who should be able to own a gun. Zimmerman’s taut script, and Colette Robert’s tense direction propel Franklin’s performance, and the physical production heightens Franklin’s work.

I’ve always admired Tara Franklin’s artistry and acting technique, and she gives a balanced, nuanced performance, holding the audience’s rapt attention throughout the play. Her performance is tour-de-force and a totally believable roller-coaster of controlled thought and desperation. One of Western New England’s most accomplished resident actors, Franklin gives an unforgettable performance that is likely to make the “best actress” category in area theatre reporters’ annual season recaps.

To be totally honest, On The Exhale made me uneasy as I went back to explore my own thoughts about gun control. However, I’m so glad I got to see Tara Franklin in a provocative piece of theatre. The exquisite technique she brings to the live theatre overrode any uneasy thoughts I had. Brava.