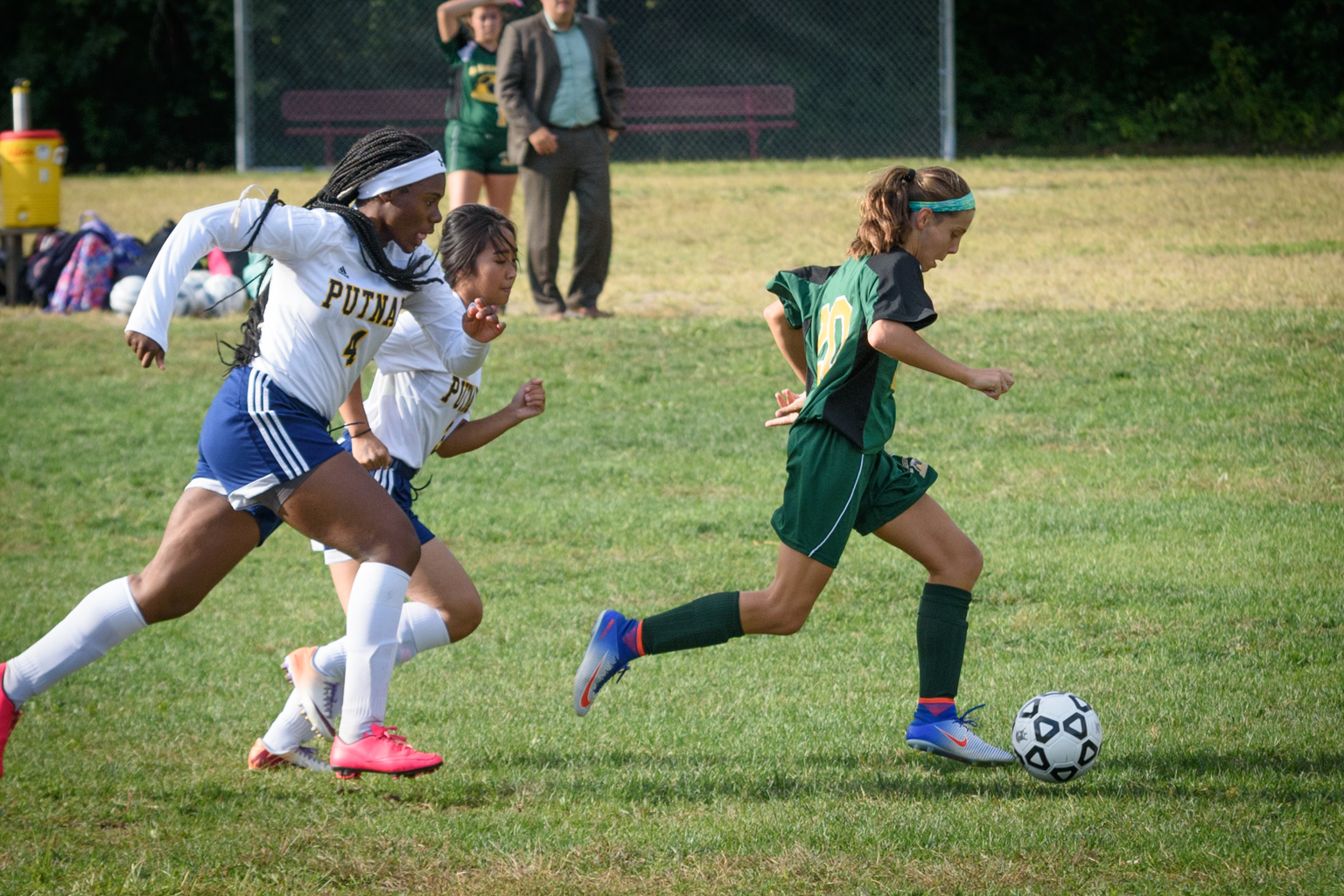 SPRINGFIELD – Putnam outraced St. Mary in a high school girls’ soccer team, winning the majority of 50-50 balls en route to a 5-2 win at Hubbard Park Field Monday.
Olivia Goodrow and Keveana Thompson scored two goals apiece to lead Putnam. Goodrow also had an assist.
“(It was) another tough loss for our Lady Saints today,” St. Mary coach Andy Lussier said. “Our defense did a great job keeping the score from running up, and we were lucky there were only five goals scored.” 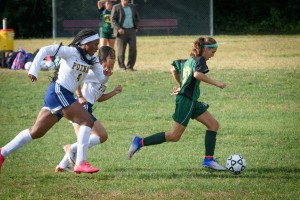 Lussier said Jenna Turrini, Sam Manchino, and Erin Olearcek kept St. Mary within striking distance by breaking up several Putnam runs.
“Aisling Butler had some amazing saves (too),” he said. Butler finished with 16 saves. “We were struggling with winning the ball in open space and being first to it, and that’s where Putnam beat us today.”
St. Mary seventh grader Allie Goodreau scored both of her team’s goals against Putnam. Lexi Shedd assisted.
“She has been a great asset to our team and has a way of creating scoring opportunities,” coach Lussier said. “She’s got this great ability to leave a goalkeeper with no chance at saving a shot on goal.”
St. Mary managed just five shots on net.

West Side’s quick goal sinks WHS
West Springfield 1, Westfield 0
West Side scored 10 minutes into the game, collecting the rebound off a fantastic initial save from Ian Saltmarsh (8 saves) for the game-winner.
“We were shell shocked the first 15 minutes,” Westfield coach Andrew Joseph said. “It was like we were playing the Revolution and we were a bunch of guys off the street. It really didn’t look too good, but we really settled down in the second half of the first half, and then we really took it to them in the second half … It was a little bit too little too late.”

Bombers down Blue Devils
Westfield 170, Northampton 177
Jack Hogan shot a 4-over 39 to lead Westfield, which improved to 6-2 overall, 5-1 league, with a win at Northampton Country Club.

LATE RESULTS
Saturday, Sept. 24
BOYS’ SOCCER
Westfield 4, East Longmeadow 0
Sophomore Brendan LaForest took a pass from Tyler Stanton and scored in the sixth minute of the game, the first of four Westfield goals in a shutout Saturday at home.
Stanton set up another goal four minutes later, assisting Aiden Dunn.
Dante White and Mark Boutin each scored a second-half goal. LaForest and Nate Boucher each earned an assist.
For LaForest and Boutin, it was their first varsity goals.
“We are really, really happy with how we attacked today,” Westfield coach Andrew Joseph said, “especially after looking a little bit disjointed in our attack against (Chicopee) Comp earlier in the week.”