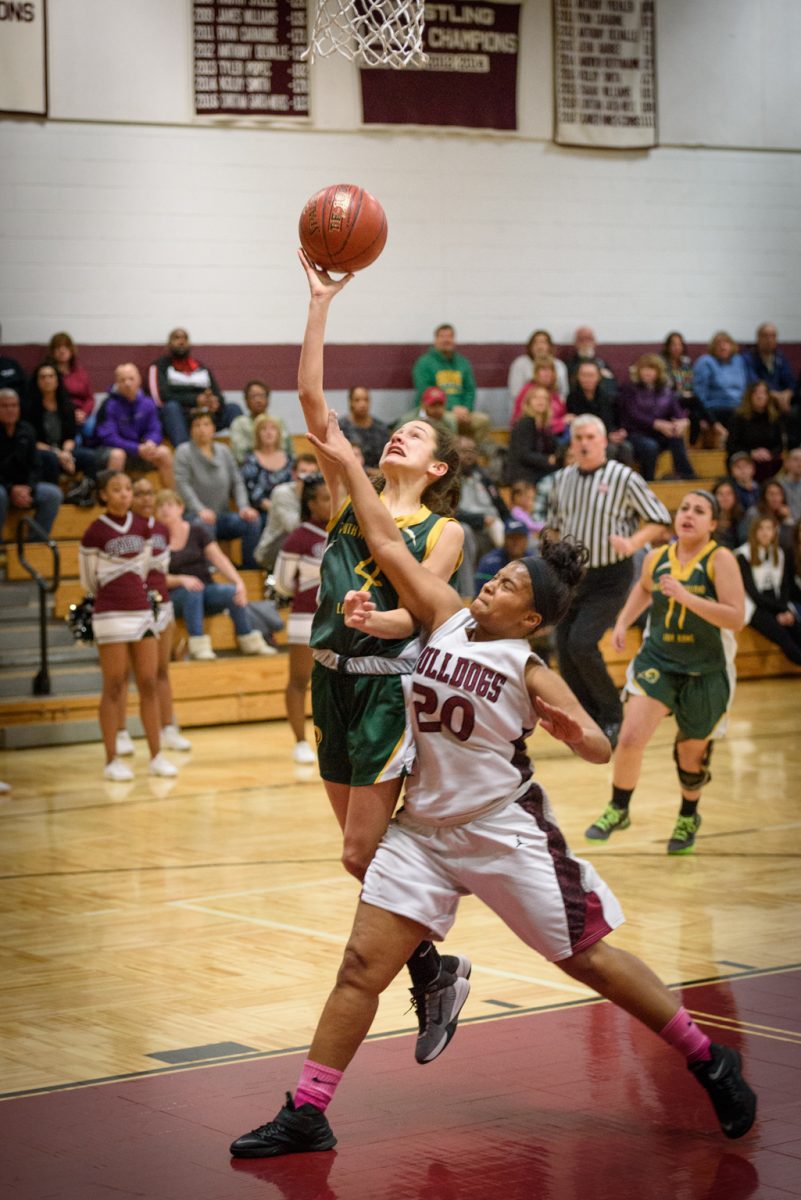 SPRINGFIELD – An’junue Washington pumped in a game-high 22 points, including 11 in the fourth quarter as No. 6 Sabis pulled away from 11th seeded Southwick in the second half of a West Division 3 girls’ basketball tournament opener en route to a 64-35 win Tuesday night.
Sabis outscored Southwick 37-10 in the second half. 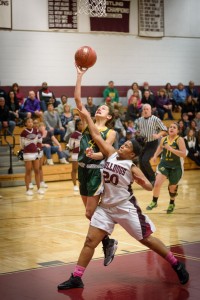 Southwick’s Brooke Waitt goes for two past a Sabis defender in a postseason game Tuesday night in Springfield. (Photo by Marc St. Onge)

“I thought we’d hang in longer,” Southwick coach Mike Gill said, “but they really killed us on the boards.”
Southwick had a chance to cut its deficit to single digits several times late in the third quarter but came away empty at the free throw line. The Rams, in fact, went scoreless for a 4-minute, 35-second stretch in the fourth quarter until McKinley White made a nice spin move in the point to halt the scoring drought.
Washington converted multiple breakaways in the fourth quarter and a 3-point dagger to build an insurmountable Sabis lead.
“We played our best basketball in the first half,” coach Gill said. “I told these girls at halftime that Sabis was going to raise its intensity.” 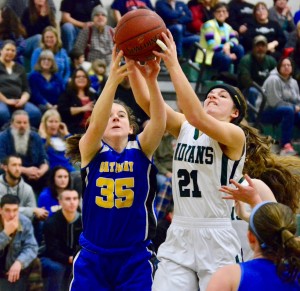 Gateway’s Grace Vanburen (35) and Ware’s Shelby Tweedik (21) go up for the ball. (Photo by Chris Putz)

White, Caroline Clarke, and Autumn Waitt led Southwick with seven points apiece. Rams’ McKenna Leary finished with five, and Makenzie Sullivan had four.
“We started off strong,” said Sullivan, a senior guard. “I think some of us expected the success we had in the first half to carry over. We didn’t follow through.”
Still, despite the loss, Southwick managed to earn a trip to the postseason, and can take solace that only one team will manage to win it all.
“We had some ups and downs this season,” Sullivan said, “but everything was done with heart. These girls did it for us seniors.”
In Division 4 tournament action, No. 4 Monson downed No. 13 Gateway, 46-18.

GIRLS’ ICE HOCKEY
DIVISION 2
PRELIMINARY ROUND
Lancers win OT thriller
No. 12 Longmeadow-Westfield 3, No. 21 Falmouth 2 (OT)
Jordan Kowalski (assist), Mackenzie Pelletier, and Katelyn Joyal scored one goal apiece, Kayla Brown made 18 saves, and Longmeadow-Westfield won an overtime thriller at the Olympia Ice Center in West Springfield.
The Lancers advance to take on the winner of No. 5 Matignon-No. 28 Sandwich to be played March 1.