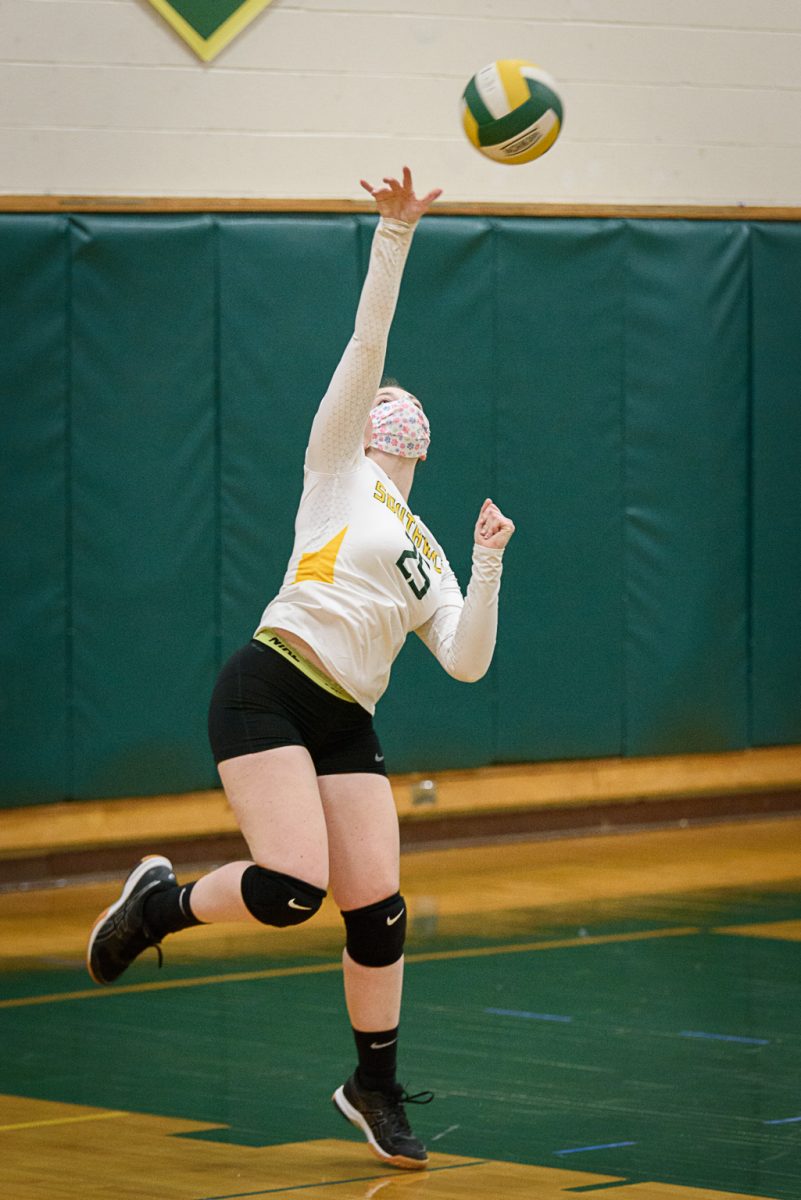 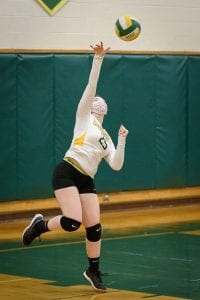 Southwick’s Kaitlyn Haseltine (25) fires in one of her many succesful serves Tuesday night against Sabis. (MARC ST.ONGE/THE WESTFIELD NEWS)

SOUTHWICK – The Southwick Regional High School girls volleyball team aced its first test of the 2021 Fall II season, literally and figuratively.
Southwick swept Sabis in a girls volleyball opener, defeating the Bulldogs 25-8, 25-13, 25-16 Tuesday night at home. The Rams racked up an impressive 26 aces.
“It was a little nervous at first because of first day jitters … but as we eased our way back in, it was really fun,” said Southwick senior Kaitlyn Haseltine, who logged a game-high 11 aces. “It was really fun and we’re glad to be back.”
Haseltine immediately set the tone for Southwick, landing several aces in the first set.
Southwick opened the game with a 5-0 run behind solid serves from Kayla Andrade (5 kills, 7 assists). Mia Pompi (4 digs) served up one of her five aces as the Rams surged ahead 8-1.
Sabis trimmed its deficit to four, 9-5, before Southwick went ahead 15-5 with a 6-0 run. Haseltine recorded nearly a half-dozen aces to fuel the run.
Alexa Rogers (3 aces) recorded back-to-back aces as Southwick easily closed out the first set.
Sabis waged an admirable rally in the middle frame. The Bulldogs tied Southwick at 4, 6, 7, 8, 10, and 11 before Rams’ Victoria Burkovskiy (3 aces) served up consecutive aces to stake her team to a 2-point lead.
Sabis cut its deficit in half, 13-12, but Southwick went on an impressive 10-0 run behind three aces from Haseltine.
In the third set, the two teams were tied 1-all. It was the closest Sabis would get as Southwick pulled away for good.
Haseltine not only finished with 11 aces, but also had four kills, six assists, and three digs.
“I really was feeling the game and we wanted to win our first one at home,” Haseltine said. “It’s a little scary because of Covid, but we are trying to make the most of it and have a lot of fun for this last season for the seniors. …We want to win some games and ultimately have fun.”
Alexandra Methe and Aniya Kamara finished with six and five digs, respectively, for Southwick. Rams’ Sarah Cerone had two aces.