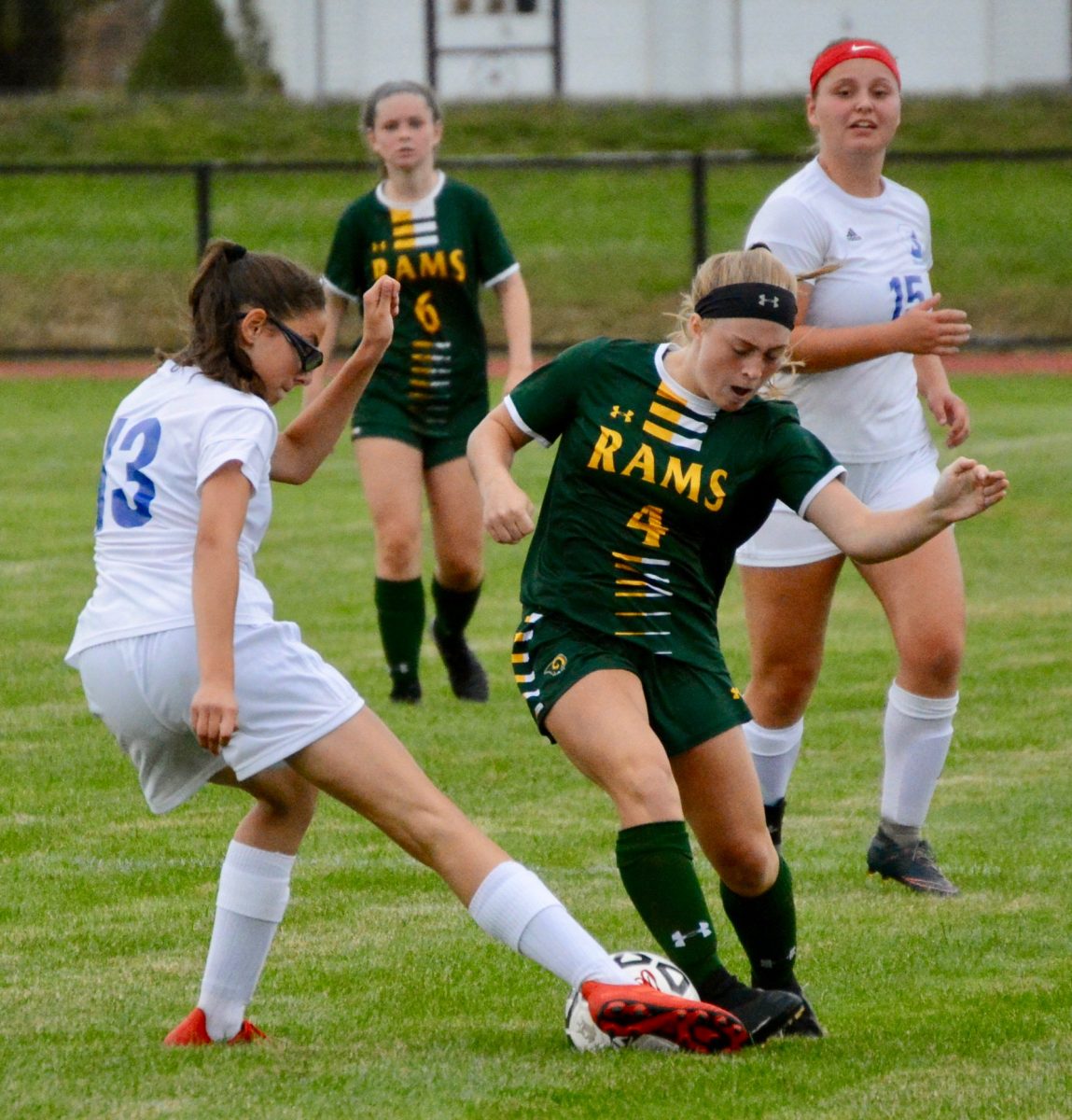 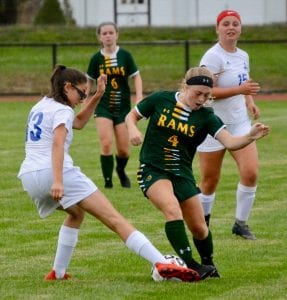 Southwick’s Kayla Russ (4) looks to pry the ball away from Granby. (Photo by Chris Putz)

SOUTHWICK – Barring a tie, the Rams were guaranteed to come out on both sides of the coin in their latest matchup.
The Granby Rams raced out to a 4-1 first half lead against the Southwick Rams and cruised to a 6-1 win Tuesday. Julia Frappier scored two first-half goals – – Nora Yang set up both scores – – and tacked on another in the second half to complete a hat trick.
Granby opened up the scoring in the fourth minute when Kaeleigh Croteau took a pass from Briana Sosa and hammered it home. Southwick responded with a game-tying goal seven minutes later. Lauren Sussmann scored and Clare Hanna assisted.
Granby would not quit.
Frappier recorded consecutive goals at the 21st and 22nd minutes for a 3-1 lead. Sienna Hill scored off a pass from Liberty Conlin to make it 4-1, and then set up Frappier’s third goal in the 58th minute.
Kayla Klekotka tallied the final score of the game.
“I think the team has a lot of talent and we’re still trying to play together,” said Southwick girls soccer coach Brad Peterson, whose team graduated nine seniors last spring.
This year’s squad has just four seniors and three juniors.
“It’s just figuring out how to play together, how to pass to people that are open instead of trying to do it all yourself and that kind of stuff,” coach Peterson said. “We have to figure out how to score. I think that is our biggest problem. Every game we are improving and moving towards it.”
Southwick was left still seeking its first win, but the team’s head coach remained upbeat following Tuesday’s loss.
Said coach Peterson: “We’re looking for a storybook story where we lose the first few and win everything after that.”
Stay tuned.

Westfield 1, East Longmeadow 0
Mackenzie Liptak scored the lone goal off a pass from Catie Bean, heading in a corner kick with 12:50 remaining in the game for the winner.
Westfield goalie Adrianna Arona recorded a shutout.

BOYS SOCCER
Smith Vocational 3, St. Mary’s 0
Smith scored two goals in the first six minutes – one each from Dylan Fil and Cole Boisvert – and cruised to a shutout at Westfield Intermediate School Field. William Florio tallied a goal in the second half.
“While the Saints played well today, the depth of Smith Vocational was hard to keep pace with,” St. Mary’s coach Andy Lussier said. “We played a much better game overall than (Monday) against Mohawk.”
Jack Masciadrelli, Aiden Burke and Mike Pepe stopped several Smith Vocational runs.
“Our backs were strong today and worked well together,” coach Lussier said. “We picked up our game in the last part of the first half and made some great runs, creating some scoring opportunities we just couldn’t put in the net.”
Brady Collins, Everett Stec and Jack Lamirande, who recorded his 100th career point on Monday, pushed hard.
Race Drobiak (6 saves) earned a shutout in net for Smith Voke. St. Mary’s goalie Hayden Lussier finished with 19.
“Hayden had another great game,” coach Lussier said. “Hayden continues to keep us in games. He has good instincts and presence in net and reads plays like a keeper with a lot more experience.”

Southwick 1, Frontier 0
Paul Whalley scored the lone goal for the game-winner. The goal was unassisted.