SOUTHWICK – Alex Grimaldi put the Southwick-Tolland field hockey team out front with the only score of the first half, Sara Hough tallied a pair of second half goals, and the Rams defeating the visiting Amherst-Pelham Hurricanes 4-1 Tuesday. 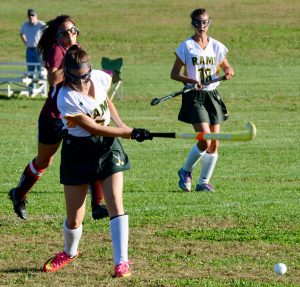 Rams’ Alex Grimaldi (8), left, takes this shot for the team’s first goal of the game early in the first half against Amherst Tuesday. (Photo by Chris Putz)

Rams survive
Southwick-Tolland 12.5, Amherst-Pellham 11.5
Southwick narrowly escaped defeat with a narrow win at Cherry Hill Country Club.
“I guess you would call this an ugly win,” said Southwick coach Al Selden, whose team stayed unbeaten at 18-0, 10-0 division.
For the Rams, it was their 39th straight division victory.
Southwick’s James Longhi shot a 35, followed by Matt Garrity (41), Chris Baker (42), and Nick Kavrakis (42).
Baker took two points and Kavrakis took three to ensure the victory.
Southwick returns to action Wednesday on the road against East Longmeadow at Elmcrest County Club.
“That’s going to be a tough one to keep our streak going,” Selden said about their next opponent. “Hopefully they recover from today, it’s a lesson learned and they will play better tomorrow.”

GIRLS’ SOCCER
Tigers net key tie
Westfield Technical Academy 3, Pathfinder 3
A highly competitive, back and forth affair resulted in a key tie for Westfield Tech at Jachym Field.
Freshman Jess Bush scored first off a cross from captain Sydnie Brock. Brock then hit net on a penalty kick. Captain Heather Lannon made a move past the defense and went one-on-one with the keeper who came out to attack. Lannon took a touch pass the keeper and netted a ball on an open goal.
Captain Liliya Stepanchuk had 10 saves in goal for Westfield Tech.
“I’m really pleased with the way my girls played today,” Westfield Tech coach Lyle Washington said. “We came out hard from the beginning and scored first. Unfortunately Pathfinder struck back less than a minute later. … A win would’ve been nice but I’ll take a tie against a team that’s been sitting in first place most of the season. My girls showed they are capable of competing against any team in our league with this tie.”

FT surges past STM
Franklin Tech 5, St. Mary’s 1
Although St. Mary’s controlled much of the game, launching 10 shots at Franklin Tech keeper Tabi Hamilton only one found the back of the net.
Allie Goodreau scored on a pass from Laura Brodkin, her first varsity point for St. Mary’s.
A 10-minute lapse on defense for St. Mary’s allowed Franklin Tech to take control of the game with four goals coming off Saints’ miscues.
“Unfortunately we continue to have a period in each game where we just lose focus and during that time it never fails that the other team capitalizes,” St. Mary’s coach Patrick Olearcek said. “We played so well other than those 10 minutes, but in the end we dug ourselves too big of a hole.”

BOYS’ SOCCER
Bombers net tie
Westfield 2, Minnechaug 2
Westfield and Minnechaug played to a tie in the Whip City. The Bombers return to action Monday against the Blue Devils in Northampton at 7 p.m.

CROSS COUNTRY NOTES: The Southwick girls went to Whiting Reservoir to take on Pope Francis, Hopkins and Duggan and swept the competition. Rams’ Becca Drohen, Gabriele Petersen, Reece Couture, and Maggie Drohen took the top four spots. Henna Carr, in her first race finished eighth to round out the team scoring.
The Southwick boys’ team had a tougher go of it, losing close matches to all three teams.
Bill Carroll won, but was unable to put up a personal best on the course he ran for years as a former Holyoke Catholic runner. The Pope Francis teams and parents showed appreciation and support for their former runner.
Seventh graders Aiden Drenen and Conner Nylund picked up the slack, scoring for the undermanned Southwick team.