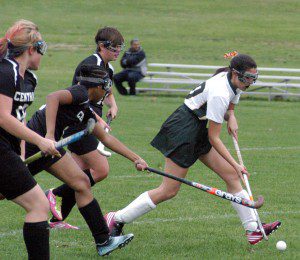 Southwick’s Olivia White, right, dribbles the ball as a wall of Golden Eagles attempt to swoop in from behind yesterday. (Photo by Chris Putz)

SOUTHWICK – The Southwick High School field hockey team has been through a carousel of coaches, and been shut out of the postseason over and over and over again. But after several recent years of heartache, the Rams are on the cusp of something special.
Southwick senior Olivia White a hat trick plus one (4 goals) in the team’s 6-1 win over Central yesterday at home. The Rams, who improved to 7-6-1, need just one point (a win or tie) to earn a spot in the Western Massachusetts field hockey playoffs. They are at Greenfield Thursday for “senior night” and travel to Mahar on Friday.
“We have chemistry on the field and we don’t play selfish,” said White, who often found herself on the receiving end of a teammate’s selfless pass. “That really helped today.”
Three different players assisted White on her goals – Emily Petit (8th and 46th minutes), Sam Power (10th minute), and Sienna Willis (27th minute).
Dani Gold and Sydney Rodger tallied first- and second-half goals, respectively, for Southwick. Alyssa Kelleher earned the assist.
“(Rams’ coach Jordan Baillargeon) really wants us work hard,” White said. “We definitely never had that before. She’s intense about winning. She comes down hard on us. But most importantly, she tells us to remember our teammates. If we’re going to get the tournament, we’ll get there together.”
Southwick’s defense came together, silencing the Central attack. The Rams converged on the Golden Eagles most prolific forward, Ellison Robinson, all game even stopping him on a breakaway when goalie Sarah Bodzinski stepped up to make a kick-save.
Bodzinski gave up just one goal – on a penalty shot.

GIRLS’ SOCCER
Westfield 2, Chicopee Comp 1
Caroline Senecal scored one goal and assisted on another – both in the second half – as Westfield rallied from a 1-0 deficit for the victory. Senecal assisted Carly Diltz on the game-winner.
Amelia Tooker finished with 13 saves for the Bombers.
Renaissance 1, Westfield Voc-Tech 0
Megan Illnicky played a spectacular game in net for Voc-Tech, pitching a first-half shutout and collecting 18 saves. Julia Levkha and Katie Nemelova delivered solid defensive outings for the Tigers.