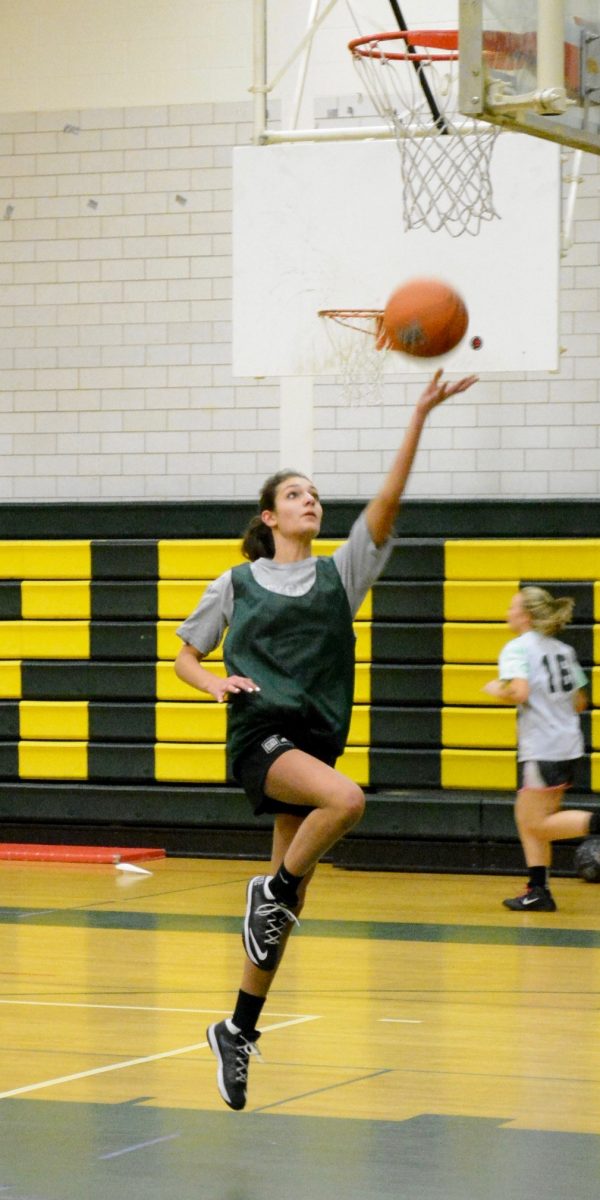 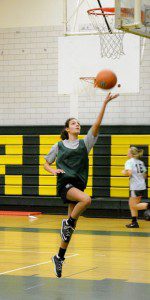 The Rams conduct a layup drill during practice Tuesday. (Photo by Chris Putz)

SOUTHWICK – It’s a numbers game when it comes to the Southwick High School girls’ basketball team.
For the first four years of Mike Gill’s head coaching career at Southwick, the Lady Rams recorded a total of just 15 victories. His win total over the last four years – 51.
“It’s sort of flip-flopped,” coach Gill said, noting players’ willingness to prepare hard throughout the offseason by attending camps and clinics, and playing on AAU basketball teams. “There is more a commitment to basketball now.”
Southwick returns a balanced mix of players for the 2015-16 season. The Rams’ roster consists of three seniors, three juniors, three sophomores, and three freshmen.
Senior guard Ashley Shea, and senior forwards Haley Parker and Katelyn Sylvia form a solid tandem of tri-captains. They will be joined by a few other key returnees – junior guard MaKenzie Sullivan, junior Sam Perusse, and freshman center McKinley White.
“Those (core) players will receive the bulk of the playing time,” Gill said, barring injury of course. “As the season goes on, the others are going to have to figure out their roles.”

Teammates look on as a player for the Southwick High School girls” basketball team dribbles the ball the length of the court during Tuesday”s practice. (Photo by casino online Chris Putz)

According to Gill, his players have accepted their roles early on. “The chemistry is great,” he said.
The team should be bolstered by a strong crop of female student-athletes, some of whom helped fuel Southwick’s success in field hockey and soccer this past fall.
Southwick is seeking its fifth consecutive Western Massachusetts tournament appearance. The Rams have been eliminated in each of their past four postseasons.
“The seniors want to get back to the playoffs and maybe take another step forward,” Gill said. “They’d like to win a playoff game.”
The Rams’ head coach said the key to elevating their program will be “to improve individually and as a team so that we’re peaking at the right time. Last year, we peaked a little bit too early.”
And remain healthy of course.
Southwick should also receive a boost from an improved home court situation with additional gym space, and a brand new school.
Southwick tips off the 2015-16 regular season at home next Tuesday against Palmer at 7 p.m.
Note: The Southwick girls’ hoops’ coaching staff has a bit of a new look to it with the addition of Emile Methot. Methot, a former point guard for Granby High School and Mount Holyoke College, has served as assistant girls’ basketball coach for Holyoke Catholic High School, Mt. Holyoke, and Holyoke Community College.
Methot takes over as the Junior Varsity head coach, and assistant coach for the Varsity team.
“She brings a lot of good information to our program,” Gill said.