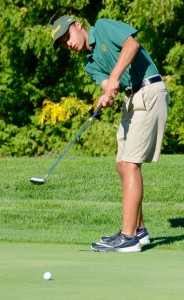 SOUTH HADLEY – The Southwick-Tolland Regional High School golf team is well on its way to taking its game to the next level.
On Wednesday, the 2016 Western Massachusetts runners-up Southwick Rams completed a sweep of South Hadley, defeating the Tigers 15.5-8.5 at the Ledges Golf Club.
“It was definitely a huge win because that pretty much secured the Suburban East league championship,” Southwick coach Al Selden said, adding “as long as we take care of business the rest of the way.”
Southwick, which improved to 8-0 and extended its league win streak to 35-0, is already just two wins away from a postseason berth with more than half the season still remaining.
Much of that success can be attributed to lead golfer, senior James Longhi, who is averaging close to par through eight matches this season. Longhi shot a round of 33 against South Hadley (6-2), the second time this week that he recorded that score.
“He’s the most consistent golfer in Western Mass.,” coach Selden said of Longhi.
After birdying the ninth hole, Longhi showed some emotion, fist-pumping the air. He managed to keep his emotions in check throughout the remainder of the match, and, in fact, birdied four of his last five holes.
Eighth grader Matthew Garrity continued his impressive two-year varsity run, finishing with a round of 38. Brad Durand shot a 41, and Jack Fairley (45) took three out of four points in a key match.
For Selden, it was his 96th victory coaching Southwick. The Rams’ coach can reach that coveted 100th win if his team goes a perfect 4-0 next week. 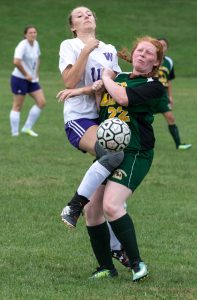 “I can’t say enough about how the team is coming together,” Westfield Tech coach Lyle Washington said. “This is the first time in my three years of coaching at Westfield Technical Academy that we’ve won four out of five games and I’m super proud of these girls.”
On Wednesday, Lannon and Stepanchuk each had nine shots on goal. On the flip side, the defense kept the shots on their net to a minimum.
“My freshman sweeper Angelica Chepurin has been absolutely amazing at shutting down anyone that breaks through our really strong defense,” coach Washington said. “My midfielders, time after time executed some great plays while controlling the ball as they moved it up the field to our forwards. The girls are playing through a lot of soreness, but they’re digging deep and winning games.”
St. Mary’s keeper Jess Crosby collected 27 saves.

LATE RESULTS
Tues., Sept. 20
Hampshire 23, Southwick-Tolland 36
Southwick girls showed true grit in a heartbreaking loss to the Red Raiders of Hampshire 23-36. Becca Drohen fought Hampshire’s Sophie Prouty for 2.9 miles, but the Red Raiders’ senior prevailed in the end.
Gabriella Petersen came from behind with a blazing finishing kick to take third place for Southwick. Rams’ Reece Couture had a solid effort, finishing in 8th place.
Southwick next competes in the flat and fast Ted Dutkiewicz Invitational on Saturday.