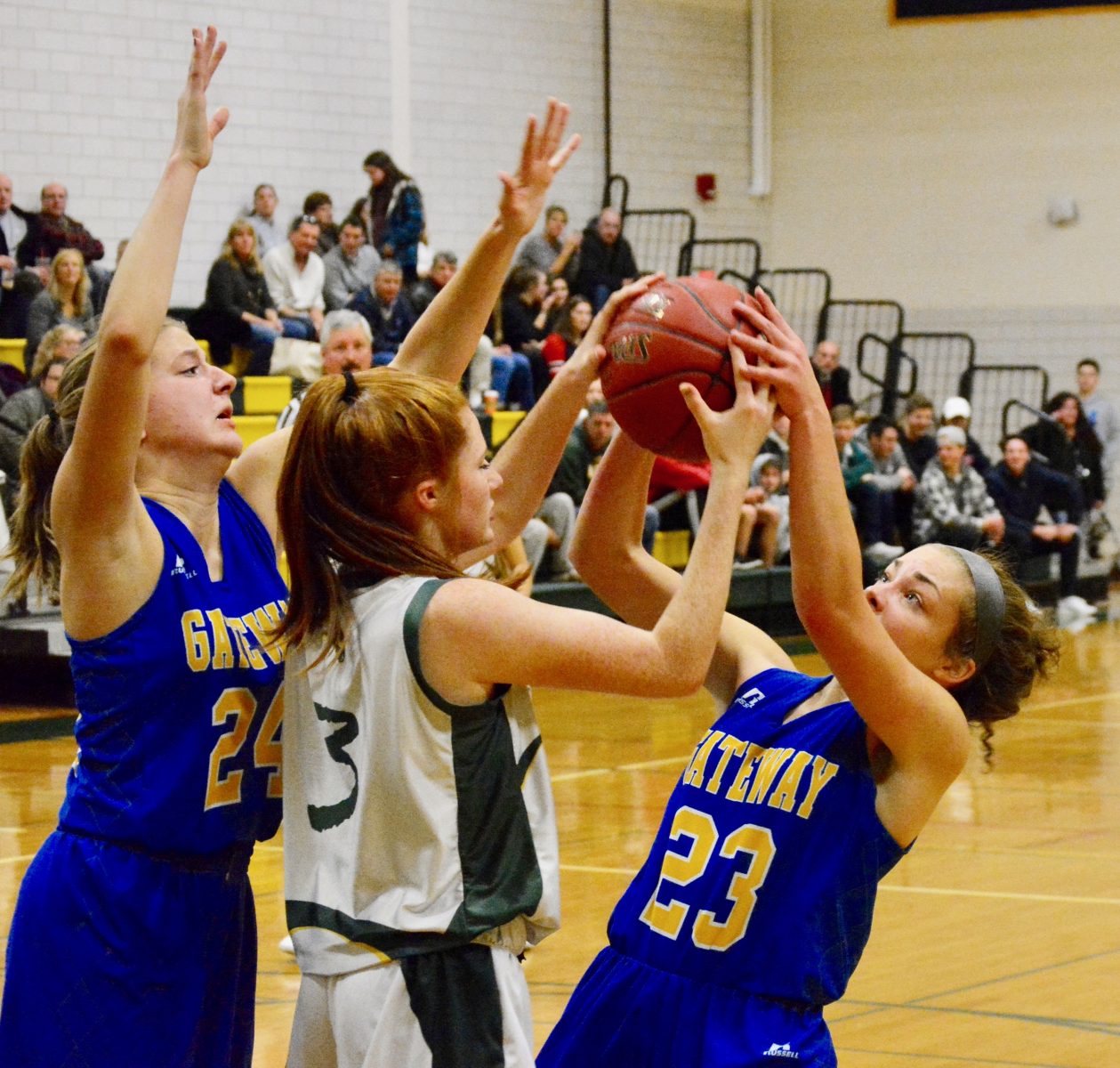 SOUTHWICK – Enthusiasm abounded across Western Massachusetts with season openers tipping off all over the area Friday night.  There was no exception at Southwick High School as the Rams turned backed the Gateway Gators in a high school girls basketball game, 31-11.
Scoring was at a premium early on with both teams combining for just 13 first half points, 11 of which came Southwick. The Rams opened the game on a 10-0 run.
Southwick appeared to settle in after the halftime break, exploding for 20 points in the third quarter. The Rams made four 3-pointers in the quarter. 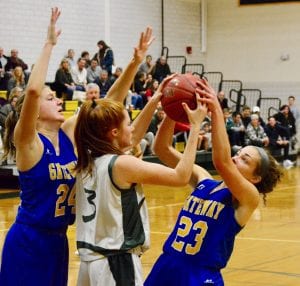 “I think the nerves went away,” Southwick girls basketball head coach Mike Gill said. “Maya (Daley), our team captain, did a good job calming the nerves down of the newer kids at halftime. That helped them out quite a bit. We played much better in the second half.”
Daley, the starting point guard and the team’s lone senior, a captain, was instrumental in distributing the ball and directing the offense.
Southwick freshman Hannah Burke scored a team high nine points, and Emily Martin chipped in with five.
It was a nice start for Southwick’s young squad.
“I just want to see them improve individually and as a team as the season goes on,” coach Gill said of his relatively new bunch. “If they do that, the wins will come. They’re excited, and working hard, trying to make the right decisions.”

Bombers survive thriller
Westfield 48, Belchertown 47 (OT)
Belchertown missed two free throws with one second remaining in overtime, and Westfield survived a thrilling season opener on the road.
Kaela Mochak and Olivia Hadla finished with 18 and 17 points, respectively for Westfield.
The game was tied 42-all after four quarters.
“We played tenacious defense … to keep that team down to 42 points in regulation,” Westfield coach Cyndi Fillion said. “We pressed and ran the ball.”
It was a good start for a team with elevated expectations for 2018-19.
“We are hoping to make a run for playoffs,” coach Fillion said. “I think we have the team to do it.”

BOYS BASKETBALL
Purple Knights nearly hit 100
Holyoke 98, Westfield 61
After just one game, it is clear that Holyoke is intent on making a run at the top spot in Western Massachusetts.
Holyoke produced four players with double-digits in the scoring column – Jacob Santos (24 points), Darius Diaz (16), Elias Figueroa (16), and Jalen Olivero (15) – in Friday night’s season opener in Holyoke.
“They’re going to be a legit team if they make shots like they did tonight,” Westfield boys basketball head coach Josh Balestracci said. “They have height and athleticism.”
Westfield, which graduated eight seniors last spring, managed to produce four scorers in double-digits as well. Jalen Moore led the Bombers with 22 points. Tony Torres collected 14 points, and Will Cameron and Riley Caughlin finished with 10 apiece.
“We have to build this thing from the ground up, come together, and grow,’ coach Balestracci said. “We have a good group of kids that work hard. That’s the best part of it. It’s going to take a little time. These kids have potential. They just need to work together and jell.”

Smith topples STM
Smith Academy 74, St. Mary 37
Jack Zigmont scored a game-high 27, and Brent Gratz had 17 to lead Smith Academy in a season opener Friday night.
Smith Academy was 16-of-21 from the free throw line.
“They shoot the lights out of the basketball for sure,” St. Mary boys basketball head coach Joe Molta said.
Luke Willenborg led St. Mary’s with 12 points. Mike Pepe and Brady Collins scored six points apiece for the Saints.
Pepe and St. Mary freshman Nick Montenero combined for a nice effort rebounding the ball.
“I thought we played well for as young as we are,” coach Molta said. “Losing (1,000 point scorer) Jake Butler is a lot to make up. …It was a good effort. It was nice to see the kids play hard. We need to get a little better, but we’re working on it.”