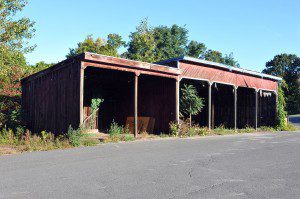 Southwick resident Bob Polverari is hoping to build a large, modern animal shelter for the town. The shelter may be located where this former DPW shed presently stands. (Photo by chief photographer Frederick Gore)

SOUTHWICK – An animal loving philanthropist is hoping to build a large, modern animal shelter for the town.
Resident Bob Polverari made the offer last night during the Board of Selectmen meeting.
“I believe the town deserves a better shelter for its animals,” he said.
Polverari moved to Southwick six years ago and said the current shelter, which includes a donated shed where cats are housed, is inadequate and does not fit the landscape of the town, which he called “classy.”
Polverari said he required assistance from Animal Control Officer Tracy Root several years ago and realized there was a need for a proper shelter facility.
“I don’t know how interested the town is in having a shelter,” said Polverari, who has not discussed details with  Root yet.
“I visited the shelter in Westfield and spoke with (Westfield Animal Control Officer) Ken Frazer and they have 28 kennels,” said Polverari. “I don’t know that we need that many here. Ken’s been through this and said he’d help.”
Polverari, who has alpacas, goats, cats and dogs on his farm, said he would like to build a 1,500-2,000 square-foot facility with seperate areas for dogs and cats, an office, bathroom and adoption space.
A builder in the 1950s through 1970s, Polverari said he knows the costs and is prepared to build.
“Right now it would cost about $100 a square-foot,” he said, adding that the shelter would be an attractive building. “I’d probably do a brick or stone front.”
The board agreed it was a generous offer.
“We really appreciate your efforts,” said Board Chairman Arthur Pinell. “I’m excited about looking into the potential of it.”
Pinell said there would be a lot of work before shovels could hit the ground.
“We would have to do some sort of needs assessment and we’d have to look at that parcel,” said Pinell of the current location of the shelter. “One of the reasons that parcel was vacated is because of its proximity to wetlands.”
Pinell said there would need to be a business plan for the facility that outlines maintenance needs, among other things.
Selectwoman Tracy Cesan supported the idea.
“I think it’s a wonderful idea and I want to be aggressive in researching this because it’s a very generous offer,” she said.
Root said Polverari has been helpful to her operations already.
“He made my kennels safe for my dogs,” she said.
Polverari helped Root erect unbreakable kennels that keep sheltered dogs from fighting. Root said Polverari’s offer would change the way the shelter operates and keep it in compliance with upcoming new laws.
“We do not have a quarantine space,” she said. “There are organizations that will quarantine dogs for us but it is expensive.”
Root said new laws set to go into effect Oct. 31 require a dog quarantine space. She added that when she has a cat that must be quarantined, she has to put the cat in with the dogs.
“It’s stressful for the cat and the dogs – it’s just not healthy,” she said.
While she does not often have to quarantine animals, when she does, the new laws will require her to have a separate space.
Root said in addition to the space suggested by Polverari, she would like to see a green building to help keep energy costs down. An outdoor space on the opposite side of a building from residents and landscaping to keep noise at a minimum was discussed, as well.
Polverari and his wife Barbara both love animals, and helping their community. Polverari said he is retired and spends his time racing cars and hunting when not working on his farm. The family lived in West Springfield for many years and Polverari said they contributed to the senior center, football field and teen center in that town. Now that they enjoy living in Southwick, they want to do something for this town.