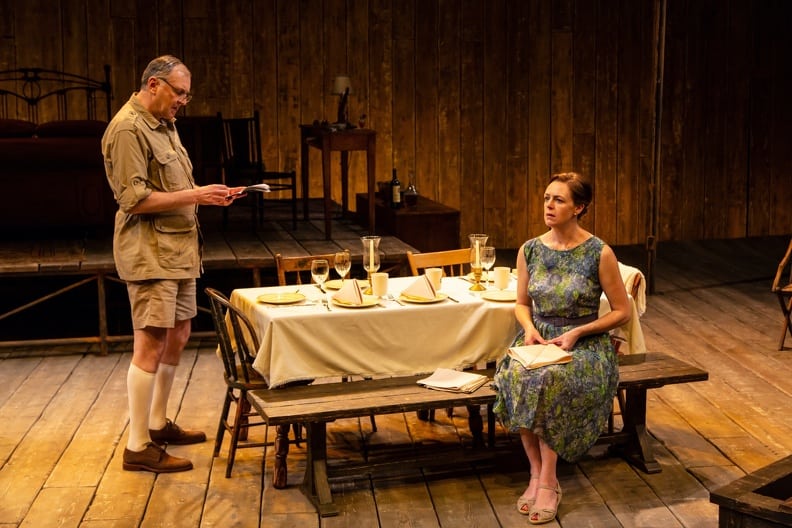 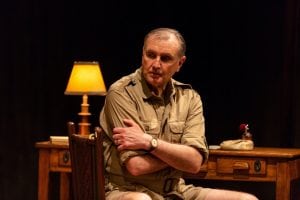 Randall Newsome in A Lesson from Aloes at Hartford Stage. Photo by T. Charles Erickson..

A Lesson from Aloes, Athol Fugard’s portrait of three people caught up in the pain of the Apartheid movement, is a powerhouse of a play that portrays the torment and torture of the South African people. It’s difficult to watch, despite its handsome production, thoughtful direction by Hartford Stage Artistic Director Darko Tresnjak, and fine performances. It’s hard to feel hope for the three characters that they might rise above their circumstances, and the evening challenges its audience to question how civilized society could separate, isolate, and divide its people.,

Americans are still confronting their own divisive past a century and a half after slavery was banned in our country. Much has been written and performed about these tough times and our reconciliation with our ancestors’ dark behaviors. This sad chapter in history isn’t unique to the USA. In South Africa, a nation and its people long-endured apartheid, its terrible consequences, and its stain of humanity. 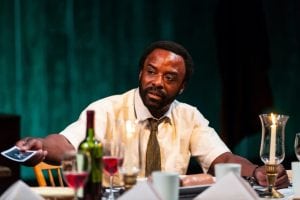 Ariyon Bakare in A Lesson from Aloes at Hartford Stage. Photo by T. Charles Erickson

Enter Athol Fugard, South Africa’s most famous playwright, whose best-known works deal with the political and social upheaval of the apartheid system in South Africa. His plays include The Captain’s Tiger, Valley Song, My Children! My Africa, The Road to Mecca, A Lesson from Aloes, The Island, and the award-winning Sizwe Banzi is Dead. A Lesson from Aloes premiered at Yale Repertory Theatre in 1980, and moved to Broadway, with James Earl Jones in the lead.

Set in 1963 in a white district of Port Elizabeth, South Africa, A Lesson from Aloes paints a riveting portrait of a society caught in the grip of a police state and the effect it has on individuals. A liberal Afrikaner, who is actively involved in anti-apartheid activity, and his wife, who is recovering from a nervous breakdown brought about by a police raid on their home, are waiting for dinner guests, a Black family. They never arrive, but the head of the family does. He has just been released from prison and plans to flee South Africa after first confronting the Afrikaner with the charge that he has betrayed him. 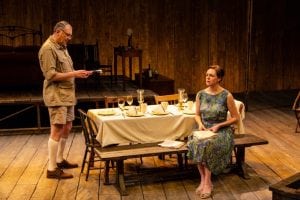 Randall Newsome and Andrus Nichols in A Lesson from Aloes at Hartford Stage. Photo by T. Charles Erickson.

If you’re interested in mindless entertainment, A Lesson from Aloes may not satisfy. If you’re interested in challenging theatre, well written, staged, designed, and performed, A Lesson from Aloes will leave you wanting the opportunity to discuss your reactions to this play. Read the program notes in the playbill, before the curtain goes up, or read them online, before you head to the theatre. It will make a big difference in understanding the play., and appreciating the nuances

Next up at Hartford Stage is a return engagement of Mona Golabek’s fantastic The Children of Willisden Lane, her portrait of her mother, the pianist Lisa Jura, who escaped the Holocaust, another dark period in our world history, on a Kindertransport. to Great Britain. That plays July 12-22. And, if you want to experience more Fugard, Silverthorne Theatre in Greenfield presents The Road to Mecca on June 21-30.