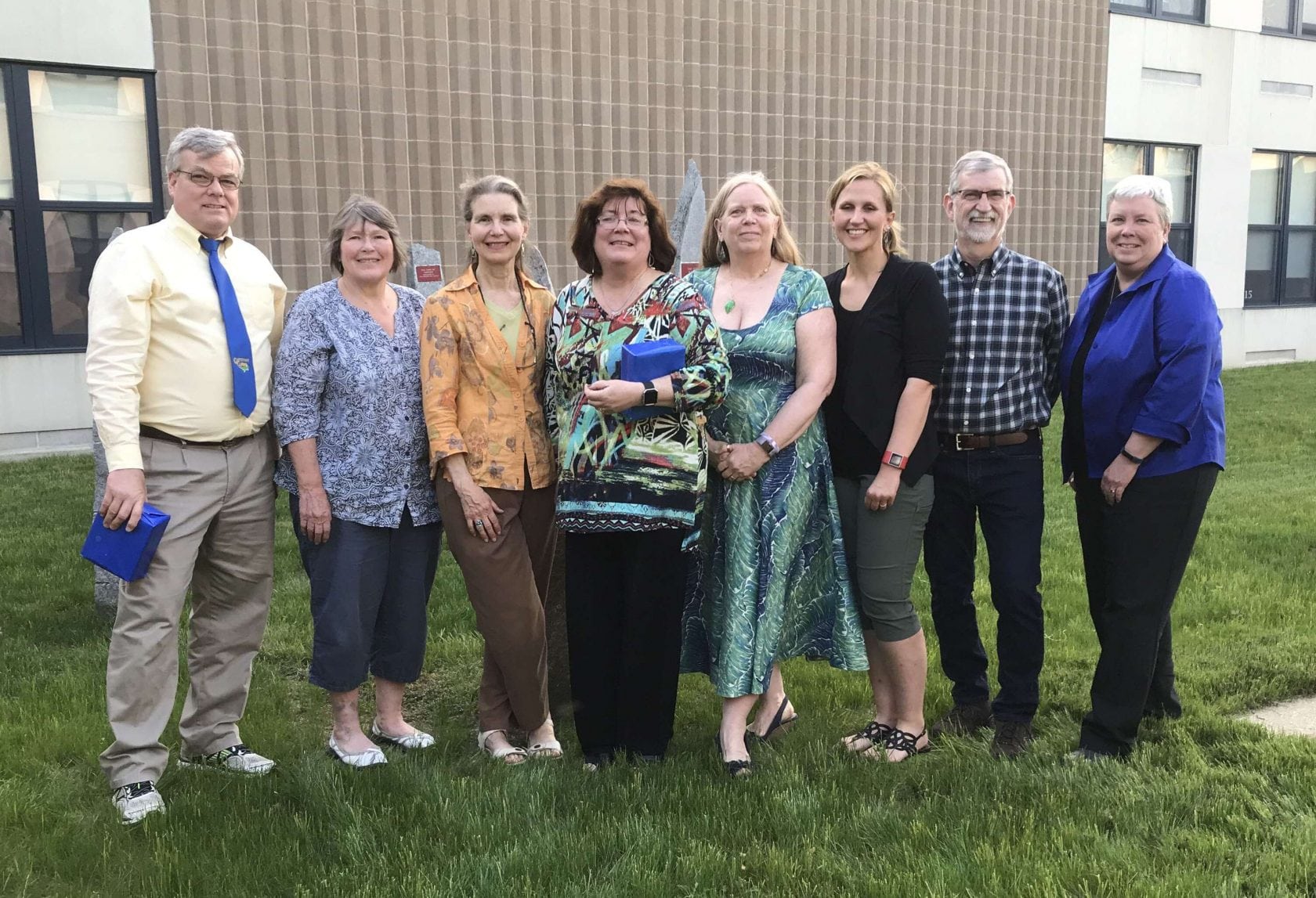 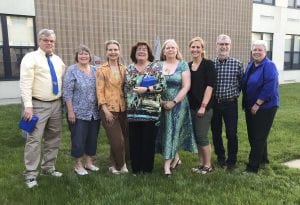 HUNTINGTON – Under clear, sunny skies in the beautifully restored courtyard at Gateway, members of the Gateway Regional School Committee and Gateway administrators celebrated staff accomplishments and honored over 219 years of combined service from 10 retirees who are leaving or have left this year.

In a recognition ceremony led by School Committee Chairwoman Michele Crane and Superintendent David Hopson, the Annual Staff Honors Reception opened with a guest presenter: Margaret Driscoll, Executive Director of the Massachusetts Association of School Business Officials (MASBO). Driscoll announced the Donald J. Johnson Operational & Cost Efficiency Award to the Gateway Regional School District “in recognition of your extraordinary efforts to improve operational efficiency and achieve significant cost savings for the betterment of education.” Accepting on behalf of Gateway was Stephanie Fisk, Business Manager, who led numerous efforts in utilities, busing, and other measures to save operational costs and mprove efficiency, leaving more funding for education. Fisk accepted on behalf of all Gateway staff members, who she said did their part to reduce power usage in the schools. The award included a check for $2,000, which Fisk said would be used for scholarships to graduating seniors.

Crane and Hopson also recognized Denae Kessel Dostal, who was this year’s recipient of the Pioneer Valley Excellence in Teaching Award. Dostal has been a member of the Gateway teaching community as a physical education teacher at Littleville Elementary and the Middle School for nearly ten years. Her success at Gateway goes beyond teaching; outside of the classroom (or gym), she coaches the high school girls’ cross country team. She holds a Master of Science degree in Exercise Science, is currently a PhD. candidate in Health Sciences (both through California University of  Pennsylvania) and has been a personal training/group fitness instructor in the Pioneer Valley for 12 years.

Moving onto retirees, Crane then announced the retiring paraprofessionals, starting with Maureen Kaminski. A resident of Worthington, Maureen has been a paraprofessional at Gateway for the past 27 years. She holds a Bachelor of Science degree in Education, K-8. During this time she has been able to work with many different grade levels and help students with academics and social pieces as they grow. Maureen says she will definitely miss all of the staff at every level, from teachers and paras to custodians and administrators, saying “They are all wonderful people, caring and respectful of each other and the students! Maureen also worked in the After-School Program run by HEC for 8 years, and the summer camp program for 3 years. “I always felt I wanted to make the world a better place when I leave by what I do,” Maureen said. “I can honestly say that working these years at Gateway has enabled me to do that in so many ways. It has been a very personally fulfilling job!”

Also retiring, but unable to attend the reception, was Cheryl Meskevich (paraprofessional at Gateway for 21 years); Peggy Leganza (24 years) and Alma Owen (7 years).

Custodians Robert Keay and Tom Burns are also retiring. Bob has been a custodian at Gateway for 30 years, serving most recently at Littleville and at the Gateway complex. Keay was unable to attend.

Tom Burns has served Gateway as a Custodian for the last 16 years. He resides in Russell and is, himself, a Gateway graduate – Class of ’71. His favorite part of his job is all the friends that he has made with teachers, staff and students through the years. He will especially miss the students who would say hello to him, or smile at him, when he met them in the hallways.

Moving onto the sole secretary retiring, Debra Robbins has been a secretary at Gateway for 17 years, serving at Chester Elementary School, the former Blandford Elementary School, and in the Middle/High School Office. She has also served as a Class Advisor for the Class of 2013, and chaperoned the 2017 trip to Costa Rica. Her favorite memories of Gateway are from chaperoning trips to New York City, the Costa Rica trip, and river rafting with the senior class. Debra says that she will miss the incredible staff members who have encouraged and supported her, professionally and personally.

Food Services Director Wendy McCaul was also honored, although she retired partway into the school year. A lifelong resident of Huntington, Wendy McCaul has actually spent most of her life at Gateway! She is a Gateway Graduate (and we will not say what class) who returned to Gateway to work in the food services department for 32 years, with 17 of those as the Director. She attended STCC and Framingham State College. She has so many fond memories, including taking the Life Skills class apple picking, then serving apples to Chester Elementary Students for lunch on Johnny Appleseed’s birthday ranking high on her list. Wendy served on numerous committees at Gateway including parent advisory council, health advisory council, Hampshire Wellness Committee, and Gateway Wellness Committee. She authored Gateway’s Wellness Policy and served on several state boards. She also ran the concession stand at athletic events from 1990 – 1999. One accomplishment that many probably don’t know about Wendy is that she worked with other families to help bring the lighting to Booster Field! Wendy was awarded the State Nutrition Association of Massachusetts’ Food Services Director of the Year award in 2017. She says she will miss both the staff and students, who were always friendly and helpful, and watching students grow from adolescents to young adulthood.

Attention was at last turned to the two retiring teachers: Patricia Diefendorf and Dan Shea. Pat Diefendorf has been Gateway’s 8th grade science teacher for nearly 33 years. She holds a BS in Biology with minors in Chemistry and Education, and a Master’s degree from Lesley University. She has also served Gateway students as a Team Leader, Blue & Gold Advisor; MS Student Council Advisor; Cooking club advisor in the after-school program, and served as a member of the Middle School Council for many years. She says she will miss many things, but will miss the kids being glad to see her and saying “Hey Miss Dief” the most! Pat adds that she is “very proud to have done her life’s work at Gateway Middle School, teaching the Gateway communities’ children for 33 years.”

Dan has taught chemistry and physics at Gateway Regional High School for 12 ½ years. He holds a Bachelor of Science degree from Western New England University, a Master of Education degree from Westfield State University and a Master of Science degree from St. Joseph’s University. In addition to preparing Gateway students to be competitive in science at the college level, he provides guidance and mentors new teachers. He is also co-adviser to Gateway’s As Schools Match Wits team, which made it to the semi-final round of the championship in 2015. Outside of Gateway, Dan directs the Camp H. A. Moses Scout Reservation in Russell, and also participates in NYLT, leadership training for young men in scouts. Dan said, “Working at a small school like Gateway, we get to know every student. It truly is like a family.”

Each retiring staff member received an engraved gift from the school committee.