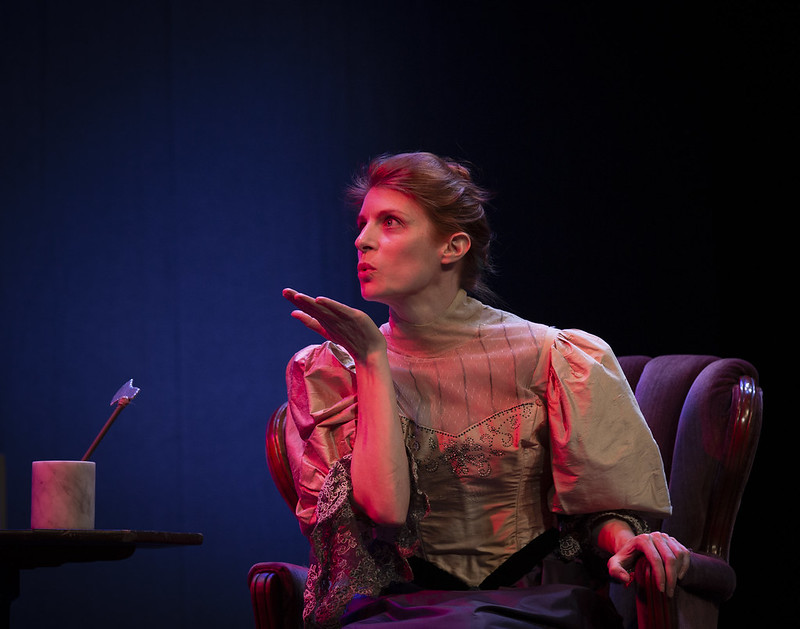 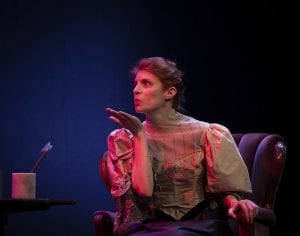 Keri Safran in “Lizzie Borden Gets Engaged” at Barrington Stage.

Barrington Stage’s signature off-season winter event, The 10 x 10 New Play Festival made a seamless transition from stage to small screen this season, as it celebrates its 10th anniversary. The festival, comprised of 10 short plays (10 minutes each in length) with six actors, all alums of previous 10 x 10 New Play Festivals at Barrington Stage, run the gamut from comedy to drama, which highlight the versatility of the playwrights, the actors, and directors Julianne Boyd and Matthew Penn.

During the pandemic theatre season, as it has evolved, we’ve been treated to plays written for streaming, plays attempting to navigate ZOOM, and plays filmed for streaming. Barrington Stage, paying sharp attention to COVID protocol and the rules and regulations imposed by Actor’s Equity, as explained by Julianne Boyd in a curtain speech, and then “performed” by the ensemble, define the parameters. Filmed meticulously for the screen from Barrington Stage’s Boyd Quinson mainstage by Cody Williams, this 10 x 10 is immensely satisfying. And, because the usually sold out run required a trip to Pittsfield, this version is available to anyone. I suspect Barrington Stage will acquire a new fan base from far afield. 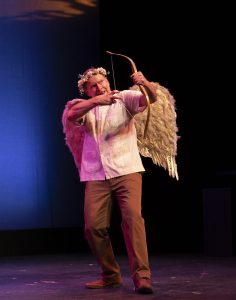 Robert Zuckerman is a cupid with poor aim,l

I found all of the playlets satisfying on their own terms, but several stuck out in my mind. Mari O’Neill Butler’s “Finding Help,” staged by Julianne Boyd, had a poignancy to it, where a well-intentioned daughter hires homecare for her once independent mother who can no longer take care of herself. Ellen Abrams’ comically dark “Lizzie Borden Gets Engaged,” also staged by Boyd,  was a deliciously dark version of a Fall River-based  “Bachelorette.” I very much liked the energy of Scott Mullen’s “People Will Talk,” staged by Matthew Penn, where two people sitting on the ledge of a tall building contemplate death, to be fascinating.

Boyd and Penn make each playlet a complete play with deft staging, and all of the production elements are fine. Alexander Sovronsky’s well-conceived sound design binds the very different playlets together. Azalea Fairley has pulled together a variety of interesting costumes, and Scott Pinkney’s lighting design works well on Joseph Martin’s flexible unit set.

Six actors negotiate 29 different roles in this 10 x 10 New Play Festival. They’re all superb. Maya Loren Jackson was terrific as a call-girl purchased by a woman as a birthday gift for her husband. Peggy Pharr Wilson shined as a woman on the edge on a ledge in her final moments. Keri Safran was deliciously melodramatic as Lizzie Borden. Robert Zuckerman was hilarious as a cupid with bad aim. Doug Harris stood out in a speed play interaction, and Matt Neely took center stage as an angel of death disguised as a loud frat boy. 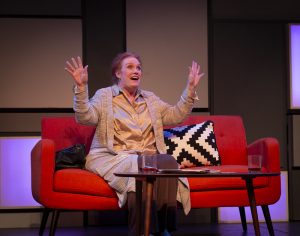 Barrington Stage is streaming its 10×10 New Play Festival through March 21.

Barrington Stage Company has nurtured so many new works, from the well-thought out revival of On The Town to the stunning American Son. The 10 x 10 New Play Festival has showcased such a variety of small comedies and dramas with large satisfaction. I’m so glad that despite the challenges of these difficult times, Barrington Stage brought this satisfying evening of theatre to so many. Kudos to the thought that went into making this happen.