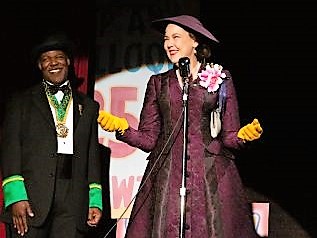 STOCKBRIDGE – Berkshire Theatre Group opened its Fitzpatrick Main Stage season in Stockbridge with Thornton Wilder’s epic Pulitzer Prize winner The Skin of Our Teeth. It’s the story of George and Maggie Antrobus and family, and their maid Sabina, who survive the dinosaurs, ice age, floods in suburban Excelsior, New Jersey and Atlantic City. It’s one of those classic plays that many literature and theatre students study, but it’s rarely performed, because it needs a large cast and great production elements. 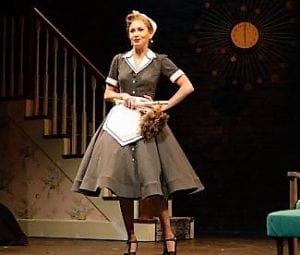 Ariana Venturi as Sabina in Berkshire Theatre Group’s The Skin of Our Teeth. (Photo by Emma K. Rothernberg-Ware)

Thornton Wilder (1897-1975) was an American playwright and novelist. He won three Pulitzer Prizes, for the novel The Bridge of San Luis Rey, and for the plays Our Town and The Skin of Our Teeth. He won a U.S. National Book Award for the novel The Eighth Day. Another play, The Merchant of Yonkers was adapted rom a European play, which he revised asThe Matchmaker, which served as the inspiration the musical Hello, Dolly!

The Skin of Our Teeth had its premiere at New Haven’s Shubert Theatre, and opened on Broadway in 1942, .starring Frederic March, Montgomery Clift, and Tallulah Bankhead. Kander and Ebb adapted the play into a musical, which never reached Broadway.

Many of Wilder’s predictions for the future are reality today, and many of the theatrical tricks he envisioned in 1942, novel at the time, are dated today. David Auburn stages the production with deft timing, aided by Isadora Wolfe’s choreography and movement,  and the production values, from Bill Clarke’s set, to Hunter Kaczorowski’s costumes, to Daniel J. Kotlowitz’s light, and Scott Killian’ sound and music are some of the best seen on area stages this season. 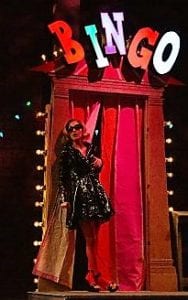 Ariana Venturi as Sabina in Berkshire Theatre Group’s The Skin of Our Teeth. (Photo by Emma K. Rothernberg-Ware)

Ariana Venturi , seen at BTG last season in the double bill of The Actor’s Nightmare and Sister Mary Ignatius Explains it All For You, dazzles as Sabina, the role originated by Tallulah Bankhead.  Lynnette R. Freeman, seen in BTG’s Lost Lake and The Mountaintop at The Majestic, is tour-de-force in three very different roles. Danny Johnson was a powerhouse as Mr. Antrobus. Tony Award winner Harriet Harris, a frequent visitor to BTG in Arsenic and Old Lace and Sister Mary Ignatius Explains it All For You,, is an area favorite. She plays Mrs. Antrobus with the same nuances ad sly comedy that area audiences love her for.

I think it’s great that BTG revives American classics forgotten by today’s audiences, like last season’s The Petrified Forest and now The Skin of Our Teeth. America has a rich theatrical tradition worth exploring. And, I’’m so glad that after three months recuperating from an accident without any live theatre in my life, the gift of live theatre has been returned to me. 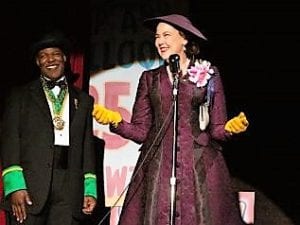 Danny Johnson and Harriet Harris in Berkshire Theatre Group’s The Skin of Our Teeth. (Photo by Emma K. Rothernberg-Ware)