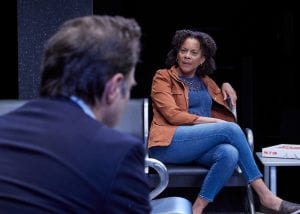 American Son, Christopher Demos-Brown’s highly lauded drama, is just as powerful the second time around. I was shell-shocked when I saw the world premiere of American Son in the Berkshires a couple of years ago.. I knew how the thriller ended. I’d discussed the show with my theatre partner on many occasions over the years since we first saw it.. So, although I approached  the Theaterworks season opener with trepidation. Would I like it the second time around? More so. Would the thrill still be there? You bet.. In the able hands of director Rob Ruggiero, a talented cast, and some tweaks by playwright Demos-Brown, since the Barrington Stage premiere, American Son delivers the goods and packs a punch.

American Son opened in 2016 to rave reviews at Pittsfield’s Barrington Stage, who commissioned Christopher Demos-Brown’s taut drama, and after its run was extended, it, was optioned for Broadway, where it premiered last year, staged by Kenny Leon and starring Kerry Washington. The Broadway production was filmed, and it debuts on Netflix in November, after having premiered at the Toronto International Film Festival.

Set in a Florida police station, a nervous black mother is seeking information about her missing high school son. A rookie cop is trying to find information. When the boy’s white father, estranged from the mother, arrives, the cop take a different more helpful stance. The officer in charge delivers a reality dose to the parents. American Son is a portrait of a bi-racial marriage unravelling, the varying attitudes between addressing justice for blacks and whites, and the tenseness of finding out what has happened to the son and why.  Playwright Christopher Demos-Brown addresses racism and white privilege without ever lecturing. Experiencing American Son will make you examine your own values in an atmosphere that only live theatre can provide.. 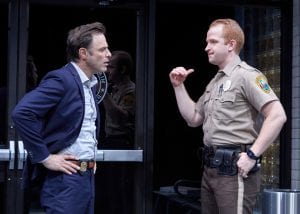 Ami Brabson is compelling as the mother, running the gamut from nervous anguish to distressed parent in one of the best performances in an area theatre this season. J. Anthony Crane plays the father and is a great opposite of Brabson’s character. John Ford-Dunker is a terrific rookie cop, and Michael Genet is masterful as the police Lieutenant. The quartet work well as an ensemble, and their timing is superb.

You may think that you’ll just catch American Son on Netfliix, but resist that temptation. Seeing the production live, and experiencing the waves of suspense among other audience members is a thrill unto itself. And, you’ll want to talk about the show afterwards.

By the way, TheaterWorks opened their season in their newly renovated theatre space. It ha a stunning new lobby, elevators to the below ground theatre, better rest rooms, and much more comfortable seats with better legroom. Bravo to TheaterWorks for a dynamic opening show in a sensational space.

American Son only runs through November 23, because Christmas on The Rocks returns for the holiday season, this year with The Love Boat’s Ted Lange as the bartender..

Mark G. Auerbach studied theatre at American University and the Yale School of Drama. He’s worked for arts organizations and reported on theatre for newspapers and radio. Mark produces and hosts ArtsBeat Radio/TV on 89.5fm/WSKB and WCPC15, and is a regular contributor to Pioneer Valley Radio.