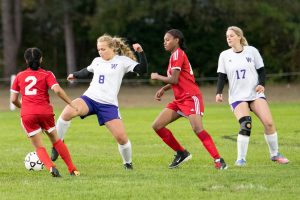 BOYS’ SOCCER
Tigers net close one
Westfield Technical Academy 1, Pioneer Valley Christian School
Ruvim Suprunchuk connected with Brad Marion for the game’s only goal 15 minutes into the second half as Westfield Tech won a thriller on the road against PVCS.
“It was a great league win,” Westfield Tech coach Kyle Dulude said. “PVCS is always a solid tournament team and our defense played great today. …”We are hoping to peak at the end of the next week going into the tournament where everything starts to come together at once. We know the areas we need to work on and we know the fun part of the season is coming up.”