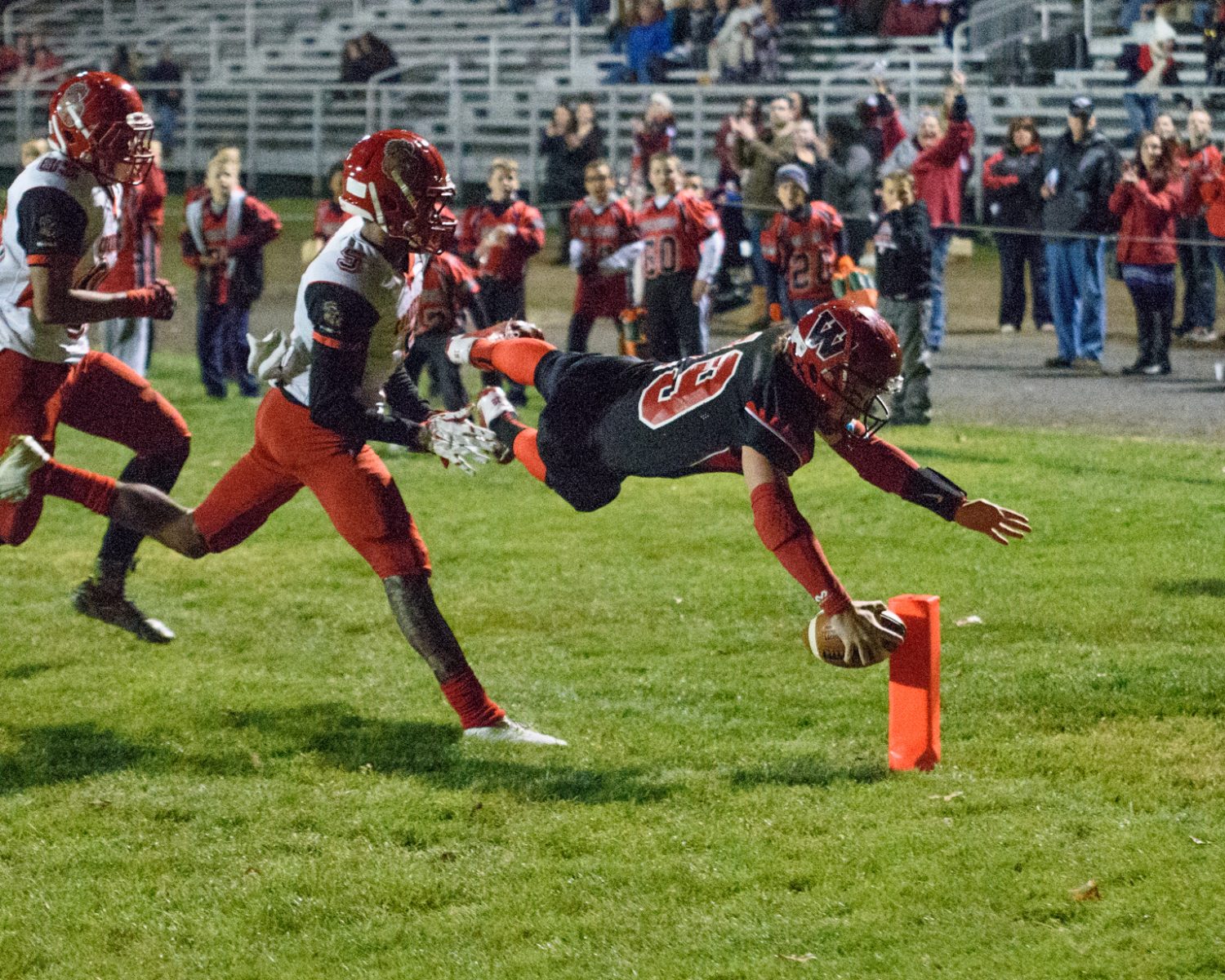 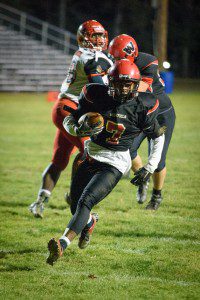 WESTFIELD – The Westfield High School football team lost a good portion of its season due to injuries, and a slow start. The Bombers are quickly making up for lost time … with wins.
Westfield won its second straight game for the first time this season. Behind a sensational effort from junior running back Wilton Royal and a solid start from junior quarterback Austin St. Pierre, the Bombers turned back the Commerce Red Raiders 48-22 Friday night at Bullens Field.
Royal rushed for 226 yards and three touchdowns in the first half – he was held without a yard in the second half – and St. Pierre (10-131) rushed for two touchdowns, and tossed another.
The Westfield Bombers soared out of the gate with a no-huddle attack.
Royal spearheaded the attack, rushing the ball seven times on the opening drive for a total of 66 yards. Royal capped off the drive with an 11-yard TD jaunt as he quickly squirted through the offensive line with 8:13 remaining in the first quarter for a 6-0 lead. He also converted a key fourth-and-2 for the Bombers on the Commerce 42-yard line, rushing for four yards to keep the drive alive.
St. Pierre converted a two-point pass to Tyler Delgado to go up 8-0.
After forcing a 3-and-out from Commerce on the Red Raiders’ first possession and taking over near midfield, Westfield needed just five plays to make it a two-touchdown lead. 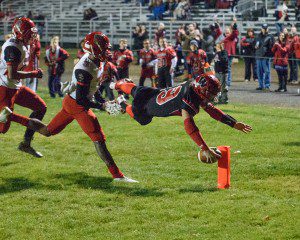 The big plays on the drive included a 28-yard pass completion, and a 33-yard touchdown run from the Bombers’ QB. St. Pierre kept the ball on a keeper, rolled out to his left, and raced down the sideline untouched, crossing the goal line with 3:46 left in the first quarter. After a failed 2-point conversion, Westfield led 14-0.
If anybody thought Commerce would fade quickly into the night, that was anything but true. The Red Raiders responded with a vengeance.
Commerce scored on the second play of its second possession when sophomore running back Jhirran Lewis took the handoff from his own 17-yard line and rumbled 83 yards for a touchdown. The score came with 2:35 left on the first quarter clock.
Commerce quickly took advantage of a Westfield turnover deep in the Bombers’ own territory, converting on a 4th-and-19 at the 29-yard line. Red Raiders’ senior quarterback Issaiah Davis connected with senior Malik Harris in the right corner of the end zone on a 19-yard TD pass 1:10 into the second quarter. The scoring play tied it, 14-all.
Westfield responded with two scoring drives of its own.
On the next possession, Royal zoomed down the left sideline for a 62-yard touchdown. He converted a 2-point run to make it 22-14 with 10:08 remaining in the first half.
Westfield’s defense forced yet another 3-and-out. The Bombers then drove 51 yards in six plays, scoring when St. Pierre hooked up with Delgado for a 13-yard scoring strike. A Commerce defensive player intercepted the two-point pass and ran it back 100 yards.
With 6:04 left before the half, Westfield led 28-16.
Westfield got the ball back near midfield with 2:16 left in the half. The Bombers made quick work of their plays and scored when Royal juked his way to a 24-yard TD, his third, with 52 ticks left on the clock.
Westfield led 34-16.
After a stalemate for much of the third quarter, the score finally changed late in the third quarter on St. Pierre’s 62-yard TD run that put Westfield up 40-16 at the 3:16 mark.
Two plays later, Lewis got low to bull past the defensive line, slipping through tackles en route to a 53-yard TD scamper to pull Commerce within 40-22 with 2:26 left in the quarter.
The only fourth-quarter score came on Delgado’s 40-yard interception return for touchdown. A two-point conversion completed the scoring for the game.