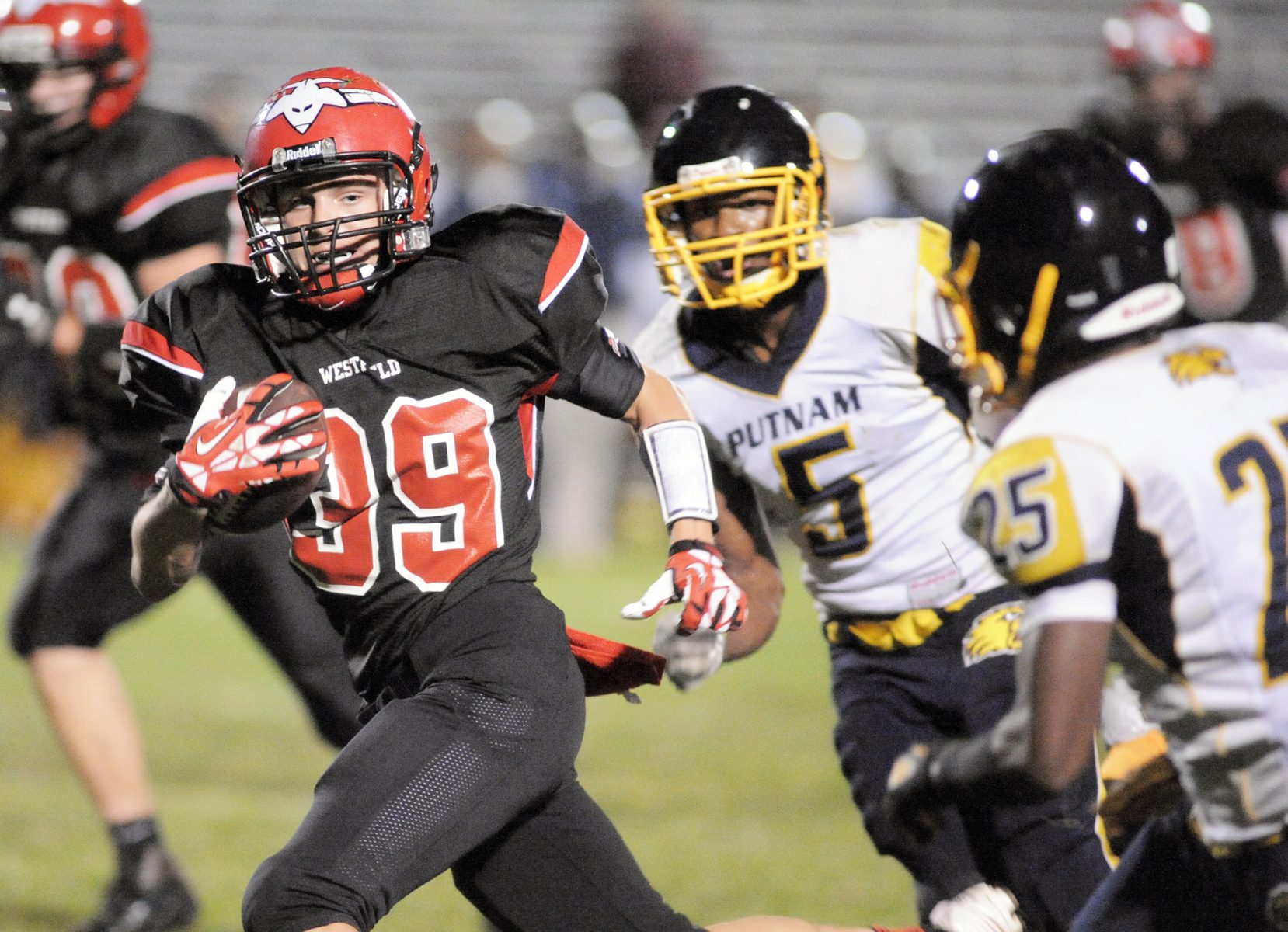 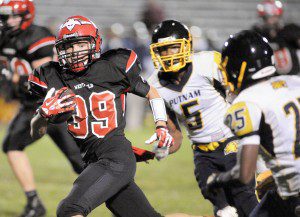 Westfield’s Cody Neidig, left, carries the ball through the Putnam defense during Friday night’s game under the lights of Billy Bullens Field. (Photo by Frederick Gore)

WESTFIELD – The Westfield High School football team has been involved in a game of rushing roulette this season, and anyone choosing to stand in the path of the Bombers’ backs has proven to be a bad gamble.
Westfield rushed for five touchdowns – Cody Neidig and Ben Geschwind had two apiece – and the Bombers trampled Putnam 35-22 Friday night at Bullens Field.
The only things Westfield struggled with, save for a few untimely penalties, were its opening drive when a Bombers’ pass fluttered into the arms of Putnam’s Caleb Worrell.
From that point on it was a ground assault from the Bombers.
Westfield needed just seven plays on its next possession to drive 62 yards. The Bombers, aided by quarterback Jake Toomey’s 29-yard run, scored on Neidig’s 9-yard scamper with 6:34 remaining in the opening quarter.
On its next drive, Westfield scored in just four plays. Neidig ran 40 yards for another touchdown, providing his team with a 13-0 lead with just over two minutes remaining in the first quarter.
Westfield probably would have scored on its next possession except a fumbled pitch resulted in a turnover. But the Bombers defense was stout, forcing Putnam backwards before a punt.
From its own 30, Westfield drove the length of the field in three minutes. Bombers’ fullback Ben Geschwind rumbled through the heart of the Putnam defense for a 30-yard score. A 2-point run from Toomey made it 21-0 with 6:41 left before halftime.
Putnam finally broke onto the scoreboard with the aid of a big personal foul penalty, Jaleel Kyles’ 20-yard run, and some razzle dazzle. Westfield snuffed out a reverse on third down, but the Beavers converted a fourth-and-goal from the 8 on a halfback pass from Milton Crawford to David Spears with 2:54 left in the half.
In the third quarter, Putnam put a brief scare into the partial Whip City crowd.
Putnam came out of the locker room and reeled off a 10-play, 73-yard drive. The Beavers ripped off a 34-yard run from Crawford, and a 38-yard catch-and-run from Josh Ortiz to Kym Domino, before scoring on Crawford’s one-yard burst with 7:31 left in the third quarter. Domino’s 2-point run brought his team within 21-14.
Westfield reclaimed a two-touchdown lead on the next drive.
After starting out on their own 45, the Bombers drove 55 yards in 10 plays. Rashaun Rivers raced 17 yards for the TD with 3:29 left in the quarter. Geschwind tacked on a 2-point run.
Putnam wasted little time closing the gap again. The Beavers chewed up quick chunks of yardage before scoring on Crawford’s 5-yard run with 1:54 left on the third quarter clock. A 2-point pass left Westfield in front, 29-22.
Early in the fourth, Westfield put the game out of reach. The Bombers capped a long drive with Geschwind rumbling four yards for a touchdown.