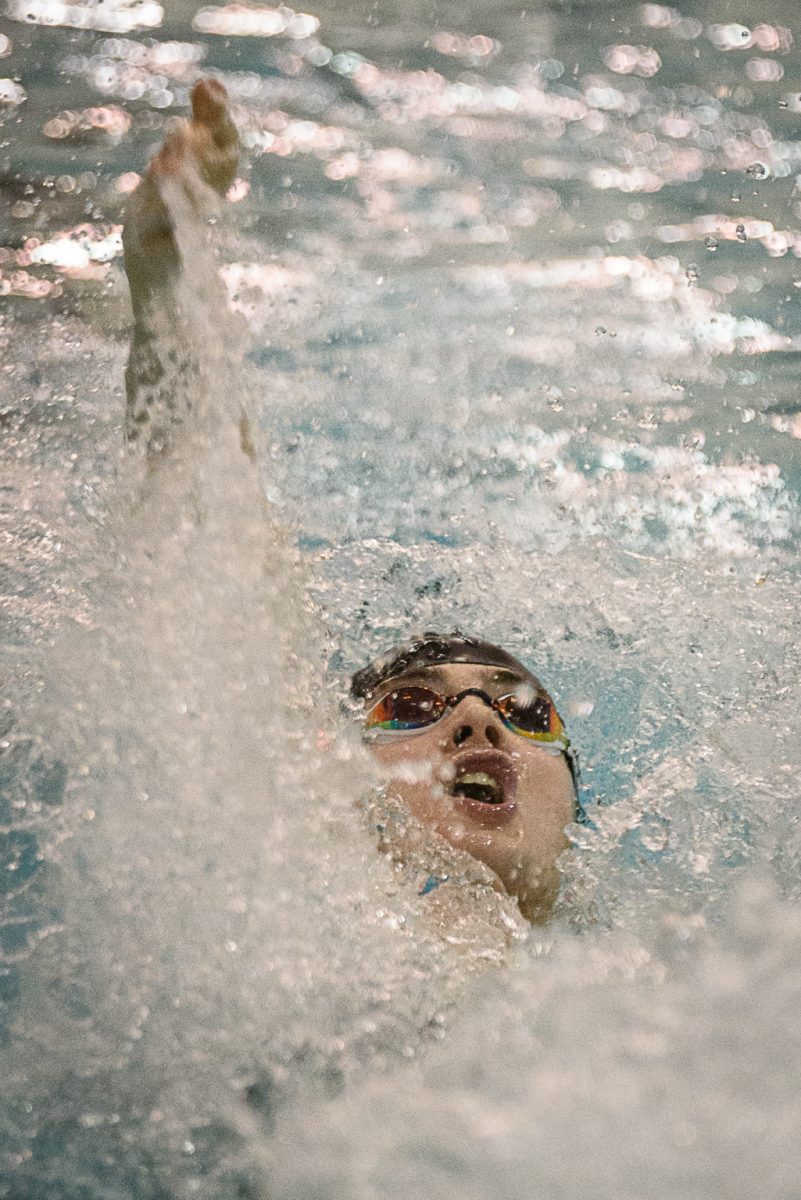 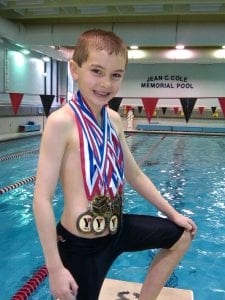 Tommy Russell, at age 10, smiles after winning all eight of his events at the Western Massachusetts YMCA Swim Championships. (JASON RUSSELL PHOTO)

WESTFIELD – One of the last great sporting moments in local sports is one of Westfield High School senior swimmer Tommy Russell hoisting a championship medal at the state swim championships last winter at Boston University.
Although he did not know it at the time, Russell’s crowning moment would be the final highlight of the 2019-20 high school sports year.
“I feel so blessed,” said Russell, who completed an amazing four-year run at Westfield High School that included a second straight state title just before the school year was cut short by the ongoing pandemic. “I have friends whose spring seasons never happened that were devastated. I was fortunate to fit right in the pocket with Western Massachusetts swimming before all this (virus-related stuff) went on.”
During those four years, Russell went from freshman phenom to senior sensation, became a two-time state swim champion and dominated the waters all the way from Springfield to Boston like very few athletes before him in the Whip City.
At age 6, Russell began swimming for longtime swim coach Jamie Bloom at the Greater Westfield YMCA. Bloom, who is currently coach of the YMCA of the Triangle in Raleigh, N.C., and associate director for swimming operations for Division 3 school William Peace University, coached the young prodigy for eight years in a career that spans 40 years of her life.
Russell set local and regional “Y” records. As a 10-year-old, he won all eight events he competed in at the Western Massachusetts YMCA Championships.
“For starters, he was a good athlete, especially in the sport of swimming,” Bloom said of Russell. “He was coachable, competitive and great under the water early on. After Tommy embraced some technical changes, he became a great backstroker.”
Russell’s speed under water proved to be a difference-maker. 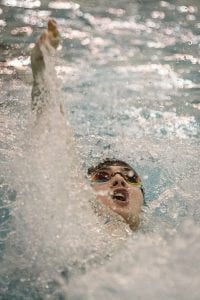 “Tommy is in the elite group of kids I have coached,” Bloom said in describing where Russell ranked in the pantheon of swimmers she has mentored over the years, “but all elite swimmers work hard and want to win. What differentiates him from the others is his attention to detail and his ability to squeeze another second out of a race.”
In a short stint with the Bluefish Swim Club, Russell qualified for Junior Nationals. It is there that he said he developed some grit and was ready to attempt to master the sport he loved.
In high school, Russell began working on turns nearly every lap at practice, focused on stroke techniques 24/7, and adopted strong breathing patterns, which involved not breathing during every stroke and on turns.
“There are hundreds of things coaches say to an average swimmer,” longtime Westfield High School swim coach Tom Lewis said. “Only a small percentage of special swimmers pick up all of them. …It takes a special sense of recognition to get over the hump.”
Russell’s success continued to bloom at Westfield High School under the tutelage of Lewis, who celebrated his 300th victory this past season. Russell shattered school records, and, during his junior year, became a Western Massachusetts and state championship swimmer in the 100-yard backstroke.
“Tommy has had a desire to want to be a champion that dates back to when he was an age grouper tasting success at 11, 12, 13 and 14 at some live regional championships, and then he got physically stronger,” coach Lewis said of his star swimmer.
During his junior and senior year, Russell routinely hit the weight room, and began to work on the little things that transformed him from an extremely fast swimmer to a championship one.
When Russell won the 100 backstroke at states in 2019, he joined a select group of state swim champions at Westfield High School that includes the likes of Chris Chambers, Caitlin Munns, Kelsey Johnstone, Krysta Downs, and a 200 free relay team comprised of Downs, Munns, Melanie Chambers, and Aubrey Cook.
This past swim season, Russell broke Chris Chambers’ long-standing record in the 50 freestyle before successfully defending his titles. Russell won the 100 yard backstroke at the Western Massachusetts championships in 51.95 seconds, and secured a silver medal in the 50 freestyle (21.47).
Westfield’s prized swimmer’s splashing success continued at states. 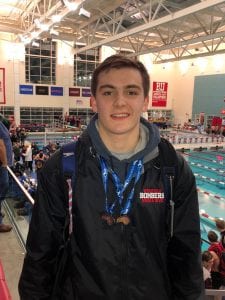 Russell repeated in the 100 backstroke against the state’s best swimmers, capturing a second consecutive state title with a 51.65 second finish. He also won gold in the 50 freestyle (21.19), defeating Minnechaug’s Chase Konstantakos. Konstantakos defeated Russell just days before at WMass.
With Russell at the helm, Westfield’s medley relay team, which included Matt Morash, Jack Beaulieu, and Anton Bonacci set a school record at states and the team went on to finish fourth.
“The season couldn’t have ended any better,” Russell said. “That was the ending we were picturing for my whole four years.”
During his high school career, Russell got the opportunity to participate in a swim program that also featured his sister Sara, 20, and Ally, 16, although soon he will be departing for Saint Leo University in St. Leo, Florida where he will swim for the Lions.
“The team culture, the coaches, and the team history of winning is what made the decision easy for me,” Russell said regarding his recent decision to attend Saint Leo University, “plus I have always wanted to swim outdoors in Florida.”
Said Bloom: “I am excited for him for his college experience. Hopefully he will grow, become even faster and have a great time.” 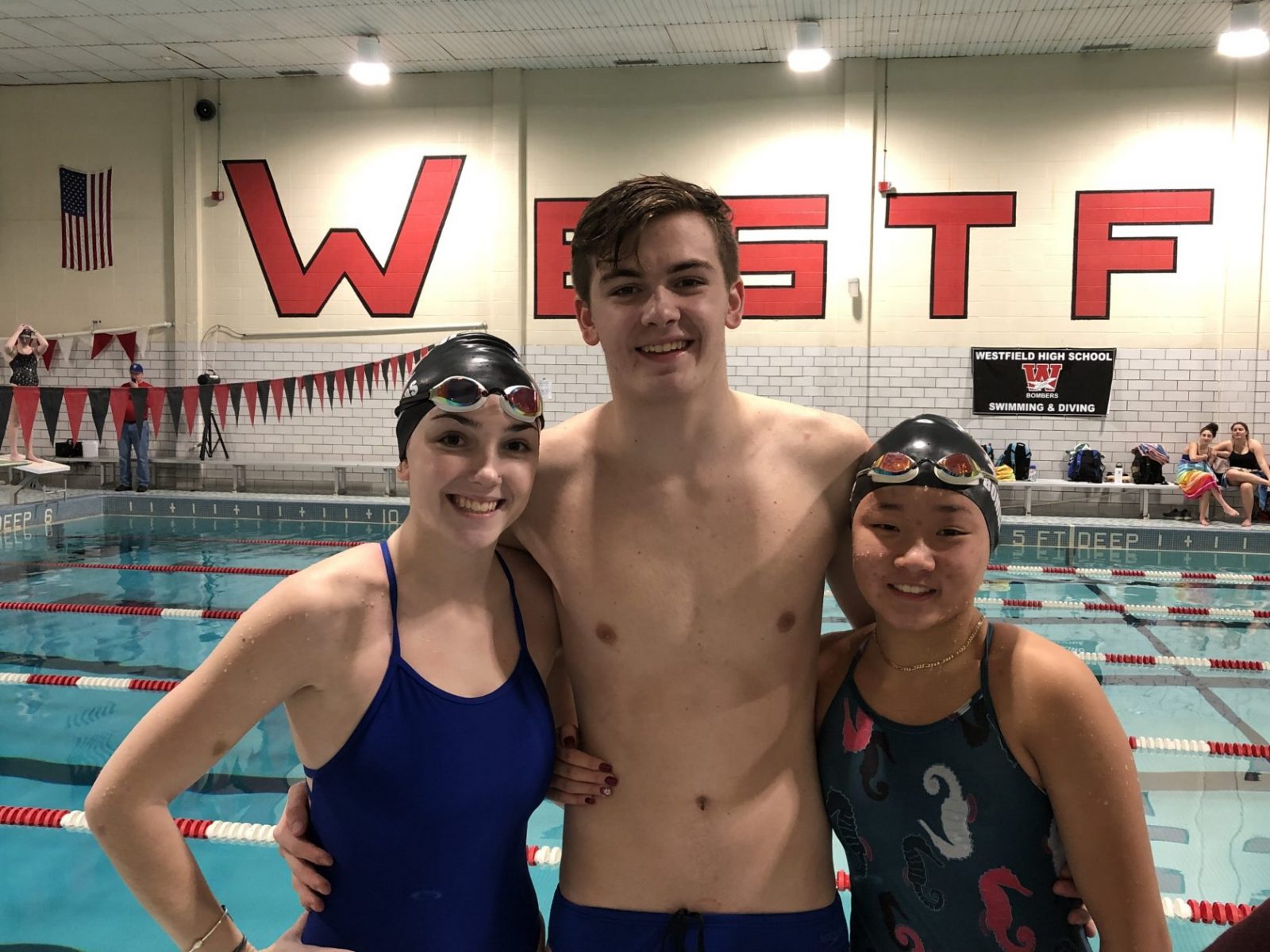