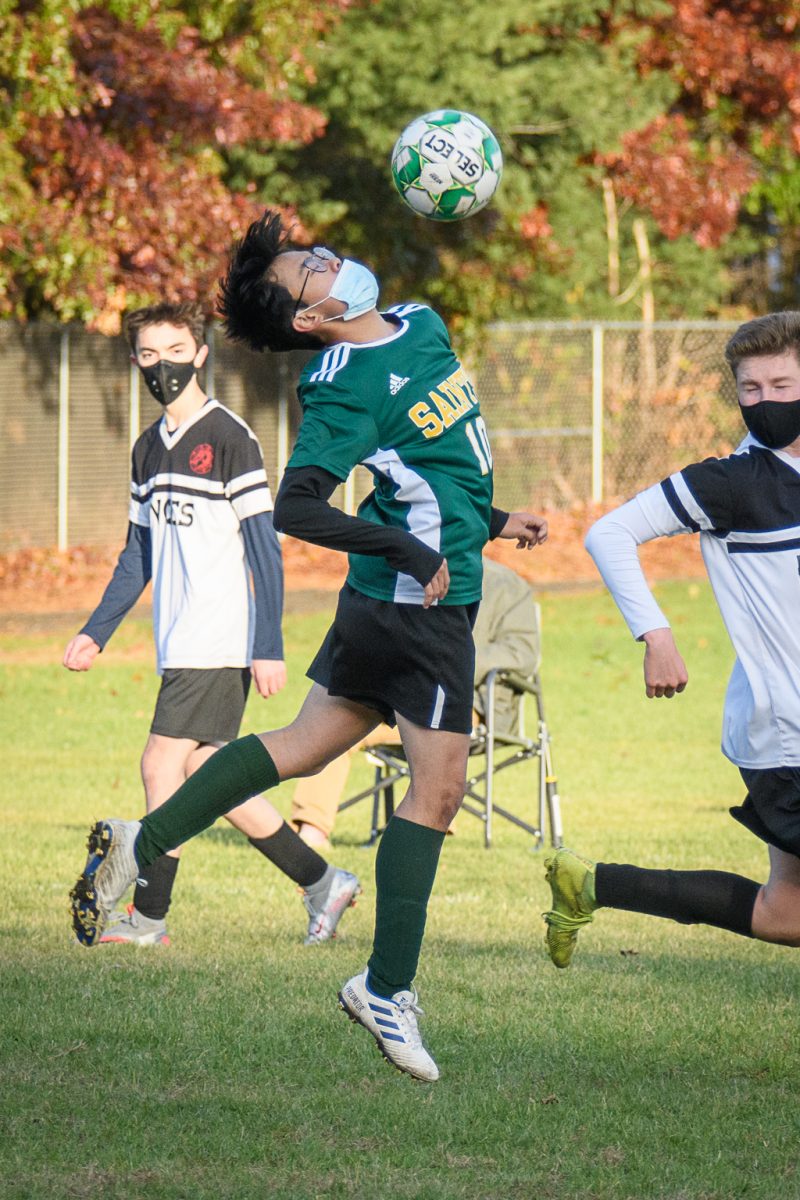 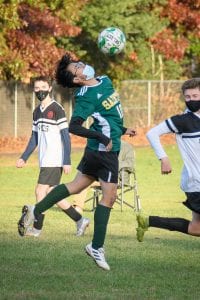 WESTFIELD – If there was anyone more deserving of a victory for their latest effort, look no further than this small, private Catholic school in the heart of the Whip City.
St. Mary’s outshot Pioneer Valley Chinese Immersion Charter School nearly 3-to-1, racking up some 30-plus shots on net to about three in a high school boys soccer game Tuesday at Westfield Intermediate School. The Saints fell though, 1-0.
“It took one perfect shot to win,” St. Mary’s boys soccer assistant coach Bill Carellas told his Saints players in their postgame talk. “Unfortunately, we just had bad luck.”
To say the Saints were active offensively is an understatement.
St. Mary’s senior Jungmin Lee, a foreign exchange student who hails from South Korea, got his team started early in the first quarter, smacking the right post with a shot that ricocheted harmlessly across the front of the net.
PVCICS threatened early in the second quarter. With a breakaway shaping up, freshman defender Joshua Cote stepped up to break up the play, seized control of the ball and cleared it.
A short time later, Lee plucked the ball away from PVCICS out along the sidelines near midfield, used some fancy footwork to do a U-turn around the ball, faked out the opposition and delivered the ball upfield.
Despite the offensive push made by St. Mary’s, PVCICS slipped a beautiful shot from about 30 yards out high over the head of Saints sophomore goalie Everett Stec in the 36th minute.
Stec was outstanding in net, tipping a shot up and over the crossbar in the closing minutes of the half and later retreating from all the way at midfield (in an attempt to generate a last-second goal) to the net to make a pair of diving saves.
Lee appeared to net the equalizer in the third quarter, driving a ball into the underside of the crossbar along the goal line, shaking the net. Officials believed otherwise though, failing to register the score.
Then, just moments later, Jeffery Vella drilled a low liner into the inner part of the right post. Again, the ball appeared to possibly cross the goal line before curling back into the field of play. Again, the apparent score was not counted.
St. Mary’s also had multiple chances go awry in the fourth quarter. Lee made a spirited run, dribbling through nearly a half-dozen defenders. Junior Brady Collins had a game-tying shot go just wide.
“We knew this was going to be a tough game,” said Lee, referring to a 3-1 loss against PVCICS earlier this season. “We had a lot of good passes; we helped each other; we gave each other a lot of chances,” said Lee. “We tried our best but unfortunately it didn’t go in.”

FIELD HOCKEY
Bowen, Bombers topple Brownies
Westfield 4, Agawam 1
Meghan Bowen scored two goals, and Claire Griffith and Abby Daley tallied one apiece as Westfield upended Agawam. Griffith and Bombers’ Jessica Isler each had one assist.
Emmerson White scored for Agawam. Mia Wood assisted.
Westfield goalie Ariana Ciaschini made three saves. Agawam keepers Serena Croteau and Gabriella Zollo combined for six saves.
‘Westfield came into this game with nothing to lose but so much to prove. They played calm and with confidence. They also played smart and with heart, which left us victorious,” Westfield field hockey coach Courtney Albee said. “This team should be very proud of their continued achievements this season.”