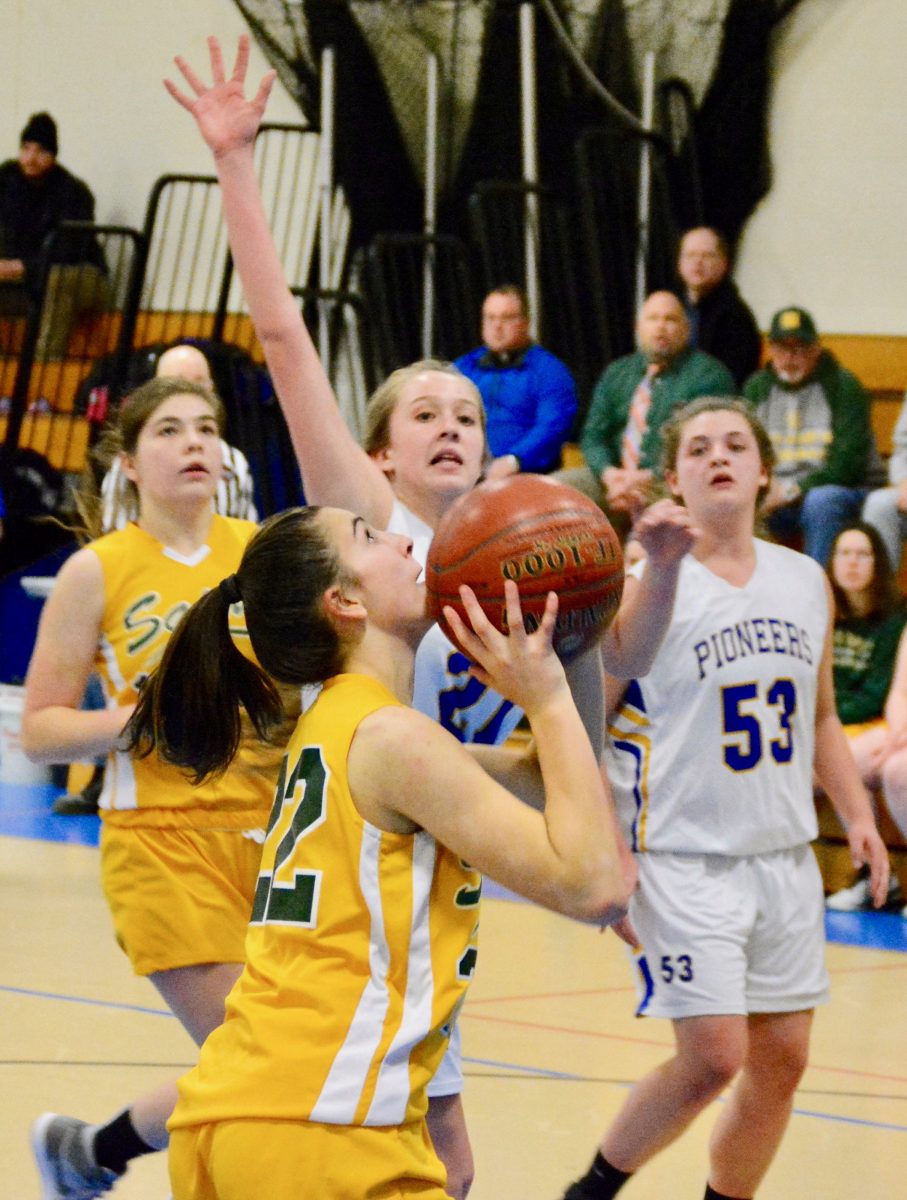 THREE RIVERS – The St. Mary’s High School girls basketball team was blessed with an amazing journey during the 2018-19 regular season that included a return to relevance and nearly ended in a stunning postseason victory on the road.
The miraculous ending never came though and the 17th seeded St. Mary Saints fell to the No. 16 Pathfinder Pioneers 28-27 in a West Division 4 tournament opening round contest Monday night.
“They worked really hard,” said St. Mary’s girls basketball head coach Rodney Rodriguez, whose team included just one senior and a core of young players that also includes seventh and eight graders. “We came up a little short but our girls fought just like they do every game, every year.” 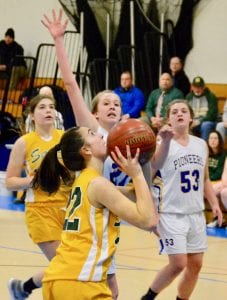 St. Mary’s Emma Goodreau (22) puts up a shot against Pathfinder in a tournament opener Monday night. (Photo by Chris Putz)

It was a hard fought, competitive contest from beginning to end.
St. Mary’s (11-10) trailed 15-13 at the halftime break, but found themselves down four points late in the third quarter after Pathfinder (11-10) converted a tough, long range turnaround bank shot near the baseline.
Just 32 seconds into the fourth quarter, Anna Kosinski hit a 2-pointer to pull St. Mary’s within two points, 24-22. The Saints knotted the game 24-all midway through the fourth quarter on a shot from Emma Goodreau.
St. Mary’s trailed by two points with just under three minutes remaining but pulled within one, 26-25, on a Jessica Crosby free throw. The Saints’ potential go-ahead basket in the final half-minute just missed.
Pathfinder made it 28-25 with two made free throws from Trista Daley. St. Mary’s Allison Goodreau responded with a pair of free throws to cut the deficit to 28-27. The Pioneers had a chance to extend their lead at the foul line in the waning seconds but missed. Crosby rebounded the ball. The Saints had three ticks left on the clock and could not get off a last-second prayer.
“St. Mary’s is a fighting school,” coach Rodriguez said. “They’re going to close ur other they’re not. …The community and the people and the girls from the past have set the tone on how to work hard.”

DIVISION 4 BOYS BASKETBALL
FIRST ROUND
No. 1 Ware 91, No. 16 Westfield Technical Academy 30
Top-seeded Ware (19-2) raced out to a 12-0 lead, and led 27-4 after the game’s first eight minutes before cruising to an opening round victory at home.
David Tikhonchuk led No. 16 Westfield Tech (7-12) with 10 points. Tigers’ Jordan Otero and Bodhi Hall finished with six and five points, respectively.

DIVISION 3 BOYS BASKETBALL
FIRST ROUND
No. 5 Wahconah 67, No. 12 Southwick 34
Wahconah improved to 16-5 with a convincing first round home win over Southwick. No game details were provided.