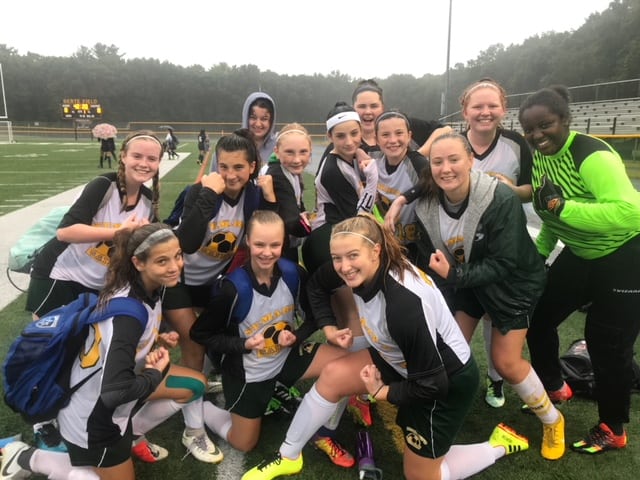 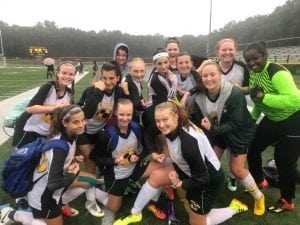 The St. Mary High School girls soccer team did not let the rain or their opponent, Sci-Tech, stand in their way in Springfield Tuesday. The Saints rolled to a 6-0 win. (Submitted photo)

SPRINGFIELD – They say when it rains it pours, but on Tuesday the heavy rains did little to dampen the spirits of the St. Mary girls soccer team, nor throw them off balance.
St. Mary did more than just slip past Sci-Tech, splashing the Cybercats 6-0 on a rainy afternoon in Springfield.
Allie Goodreau paved the way for a productive outing with five goals scored. Her sister, Emma tallied a goal and an assist, and captains Erin Olearcek and Chloe Lussier also got in on the sister act with assists of their own.
Jess Crosby registered the shutout in net for St. Mary, which allowed just one shot on goal.
“We are so young but the girls are getting better and better at overcoming the players that are out with and injuries, and getting the results they need to get,” St. Mary’s coach Pat Olearcek said.
St. Mary’s, which improved to 5-0-2 with the win, has already surpassed last year’s win total. The Saints will play its third game of the week in Springfield Friday against Putnam.
“Hopefully we can keep the momentum going,” coach Olearcek said.