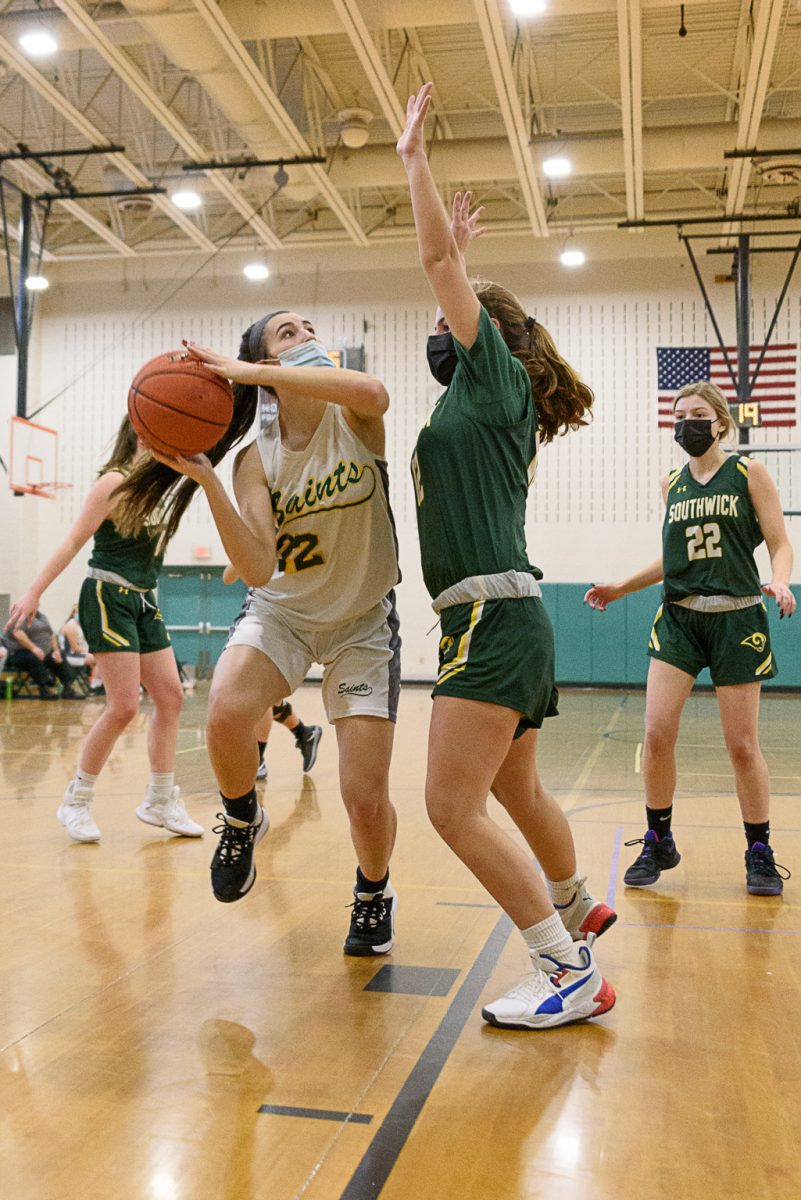 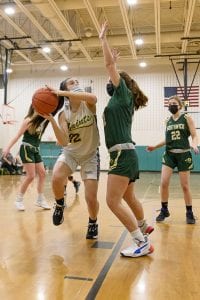 WESTFIELD – A change of scenery did the St. Mary’s High School girls high school well.
For the first time in this COVID-shortened season, St. Mary’s played someone other than Westfield Technical Academy or Pioneer Valley Chinese Immersion Charter School, and enjoyed marked success. The Saints held off the scrappy Southwick Rams, 31-23, Tuesday night at Westfield Intermediate School.
Both offenses sputtered in the early going with Southwick’s only points of the first quarter being a Brielle Ensign 3-pointer and a basket in the low post from Emily Hanifan. Emma Goodreau and Peyton Ramos accounted for St. Mary’s first quarter points. Goodreau scored the opening basket of the game and later in the quarter made one of two free throws. Ramos made a turnaround jumper, tying the game at 5-all just before the quarter ended.
Goodreau’s free throw and Ramos’s bucket started an 11-0 run. Paige Hutkoski made two key putbacks to help St. Mary’s take a 13-5 lead.
Southwick went scoreless throughout nearly the entire second quarter, until Hanifan scored in the low post with 48 seconds remaining to pull the Rams with six, 13-7. Goodreau responded with a two to increase St. Mary’s lead back to eight at the half, 15-7.
Goodreau made it a double-digit lead with a quick second half basket. Two free throws and a 3-pointer from Allie Goodreau made it 22-9.
St. Mary’s maintained a double-digit lead for the rest of the third quarter until Southwick’s Kaitlyn Haseltine hit a 3-pointer with 37 seconds left on the clock. The Saints led 24-16.
Emma Goodreau put St. Mary’s back up by double digits, 26-16, in the opening seconds of the fourth quarter with a two. Then the Saints weathered a storm of sorts on the court.
Southwick forced a turnover and then Haseltine hit consecutive 2-point shots. A free throw from Haseltine trimmed the Rams’ deficit to five with 3:16 to go, 26-21. It was the team’s first made foul shot after missing their first 10 free throw attempts.
With pressure mounting, Ramos bailed out St. Mary’s with another strong inside move for two, and quite possibly one of the shots of the year, locally, draining a 3-pointer with a defender in her face just before the shot clock expired.
“When I made the three I was very surprised because I’m not a very good shooter, but it was one of my last games so that was nice,” said Ramos, the team’s lone senior.
The 3-point shot may have taken Ramos’s breath away, momentarily, but it took the wind out of Southwick’s sails for good.
“We haven’t played many teams this year so it’s a nice switch-up,” Ramos said. “We’ve been playing Westfield Tech over and over again. We played Pioneer Valley Chinese Immersion a few times so it’s nice to have a different game to be playing in. I think they’re very different than the other teams we were playing against so it was kind of hard to get used to it at first. I think I soon as we started getting into the second quarter, second half, it was a lot better of a game.”