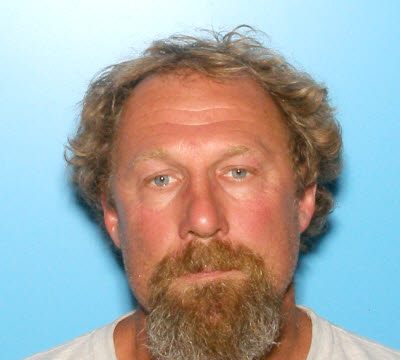 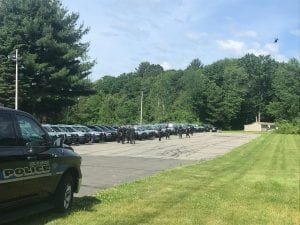 State Police vehicles line up in the Living Hope Church on College Highway in Southwick as a staging area for the search and rescue operations of a missing Southwick man. (Photo by Hope Tremblay)

SOUTHWICK – The search for a missing Southwick man ended Friday afternoon nearly 24 hours after it began.

Jeffrey Bober, 56, owner of Blossoming Acres farm, walked into the woods behind 249 College Highway around 3 p.m. Thursday afternoon and was described by Southwick Police Chief Kevin Bishop as “despondent.”

At 4:15 p.m. Friday Bishop sent out a call to residents that the search was concluded and no other information was being released at that time.

Several public posts on Facebook suggest Bober’s body was recovered, however, state police have not yet confirmed the result of the search.

Bishop thanked residents for their cooperation during the search.

“I would also like to thank the members of the Massachusets State Police S.E.R.T. (Special Emergency Response Team) today,” he said. “I witnessed true professionalism by a great team of troopers. They assisted with over 40 troopers, numerous K-9 teams, mounted horse patrols and a helicopter.”
Bishop then thanked Pastor Dan Valeri from Living Hope Church “who not only opened his church up to us for our Command Center but also provided the search teams with refreshments.”

Massachusetts State Police Search and Rescue team joined Southwick Police and Southwick Fire in the search for Bober well into the evening hours Thursday and resumed around 9 a.m. Friday. The state police helicopter, a canine unit from Longmeadow and a Westfield Police officer and drone were utilized throughout the search.

More than 40 troopers assisted in the search, which was based out of a command center at Living Hope Church.