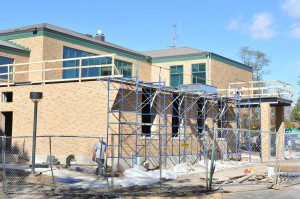 Contractors from Evergreen Construction in Chicopee, continue to work on the new 1,300 square-foot addition of the Southwick Center Center located at the Southwick Town Hall. (Photo by chief photographer Frederick Gore)

SOUTHWICK – The expansion of the senior center is taking longer than expected and is targeted for completion in November.
“We moved up the date about a month,” said Lynn Bivon of Evergreen Construction, general contractors for the addition.
The Board of Selectmen recently voted to extend the deadline for the addition. The cause for delay included late shipment of materials and other unexpected events.
“It was a lot to do in a short period,” Bivon said, noting that the project also started later than originally called for in the bid because of the bid process.
Because bids for the Senior Center expansion came in over budget, the Select Board voted in April to appropriate $80,000 from various town accounts to cover the gap.
The actual difference between the lowest bid and the project budget was $97,687. The budget was set at $546,322, which includes $508,322 in fiscal year 2011 CDF funding and a $40,000 commitment from the town for additional roof reinforcement work to accommodate future municipal expansion. Evergreen Construction of Springfield made the lowest bid of $646,009 -which is a bid of $635,000 plus $11,009 for alternate work, including a partition and wood floor.
Southwick Chief Administrative Officer Karl Stinehart said everyone is “very excited” about the progress.
“They poured the second floor, which is really the roof,” Stinehart said. “It has been designed and constructed to be a future second floor.”
Once the concrete cures, the roof can be put in place. Stinehart said some programs of the Senior Center have been moved to accommodate construction and are running smoothly.
“We’re fortunate to have the room in the community center for a kitchen,” he said. “It’s worked out well but a lot of people are just interested in getting into the new space.”
Stinehart said crews are working to get the envelope of the expansion water-tight and should be able to quickly complete interior work.
Bivon said a crew of three to five Evergreen employees, as well as a variety of subcontractors, including electricians, roofers and masons, are working on the project.