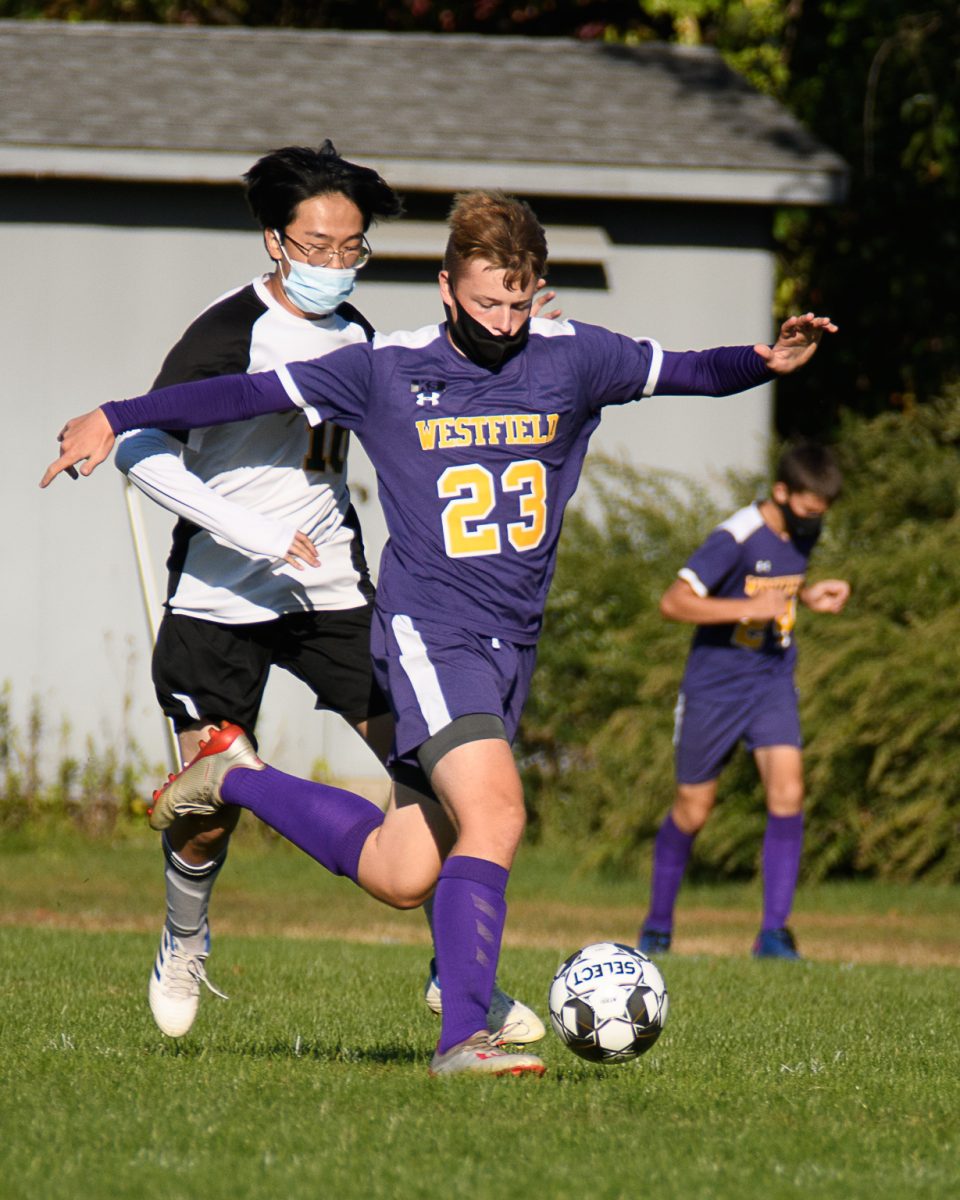 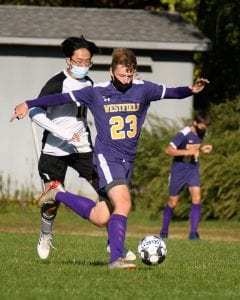 “We’re just keeping it going and trying to achieve more things and new records and all that stuff.”
Westfield Tech senior center-midfielder Simion Mocanu said there is definitely a key to their success though.
In addition to crediting head coach Kyle Dulude, Mocanu said “the chemistry between us is just amazing. We’ve worked well with each other. We all love each, We’re just a big family.”
Mocanu set up the first two scores against St. Mary’s, first assisting David Bulatov who lofted what easily is this season’s best goal so far on a perfect shot into the upper left corner, and then setting up Jon Vella.
Junior Brady Collins played well in goal for St. Mary’s despite being peppered with dozens of shots. Collins withstood a constant barrage of shots through the game’s first 20 minutes with remarkable success before the Saints defense tired in the second quarter, a quarter that saw three Westfield Tech goals.
Westfield Tech’s Adam Strycharz and Jon Vella led the team with two goals and two assists apiece. Bulatov finished with two goals and one assist. Tigers’ Emancil Litmac and Livingston Ndayikenguru each scored one goal. Avel Vdovichenko had an assist.
“We’ve been working on what needs improvement and we have been really capitalizing on it for the past couple of weeks,” Westfield Tech senior right fullback Raven Carrasquillo said. “We’ve been trying to do new plays and new types of strategies to get better attacking plays and goals. We’ve been doing a lot with each other, in our bubbles of course, and it’s really paying off.”
Carrasquillo said, in addition to forging friendships, the game of soccer has taught him more than one thing.
“It’s teaching us great leadership skills,” Carrasquillo said. “You’ve got the motivation to keep on running when you’re completely out of breath; you’ve got the leadership skills to know when something’s going wrong and to lead people in the right direction; and you’ve got communication skills that you normally wouldn’t get from just being in school. …It has really been an honor to be here.”
Said Dulude: I am going to miss them. They’re the perfect student-athletes.”

GYMNASTICS
Bombers topple Falcons
Westfield 123.75, Minnechaug 119.525
Westfield restored order in the gymnastics world, at least for the Whip City, with a road victory in their season opener. Bombers’ gymnast Kylie Liptak won the all-around competition with a socre of 32.15, and Emery James claimed third (29.25).
Liptak place first on the vault (8.375), an event Westfield swept with a second-place finish from Rylee Altieri (8.2) and third-place finish from Lizzy Galczynski (8.175), and on the balance beam (8.35). She was second with her floor routine (8.075) and third on uneven bars (7.35).
Galczynski also finished secxond on the bars (7.45).