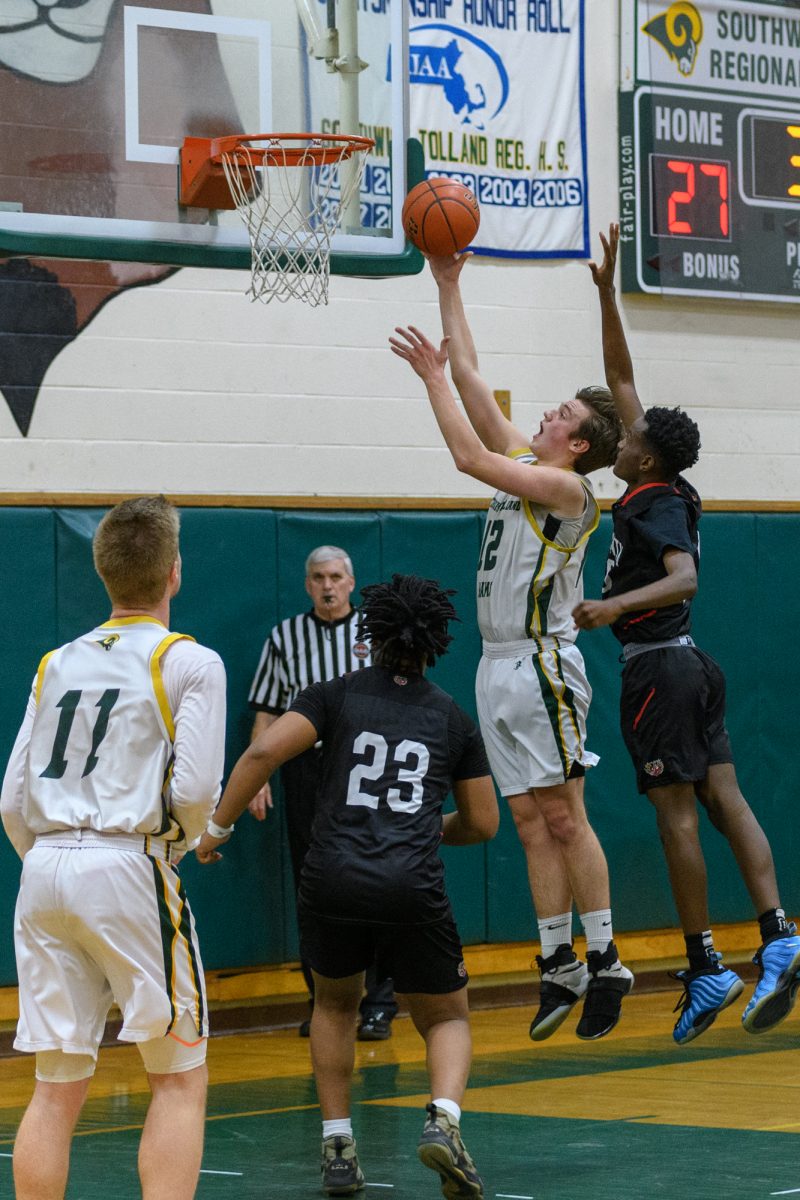 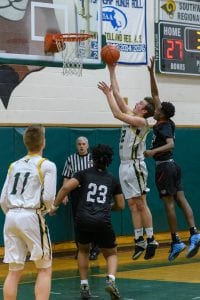 SOUTHWICK – It was a senior moment that coaches, teammates, parents and fans can be proud of forever.
Southwick senior Connor Roy dropped a quick nine points before going down with a non-contact injury late in the first quarter Tuesday night against visiting Renaissance. After Roy was helped to the sideline, fellow senior Devin Parrow picked up his teammate, exploding for a total of 28 points en route to a tournament-qualifying 60-42 Rams’ victory over the Phoenix on “Senior Night.”
“It was nice to get the seniors the win on their last night,” Southwick coach Peter Fiorentino said.
Three of those points came during a 9-0 Southwick run in the first quarter as Roy caught fire. Roy opened with the game’s first five point, popping a two and nailing a 3-pointer. He had consecutive steals and subsequent lay-ups during a 9-0 run that put Southwick out front early 14-7.
Roy exited the game with 1:31 remaining in the first quarter after his leg buckled, attempting to go up with the ball underneath the basket.
Roy’s teammate stepped up in his absence.
Parrow drained four straight baskets to fuel a 10-0 run to give Southwick a 33-19 lead heading into the halftime break.
Renaissance battled back briefly in the third quarter, pulling to within 39-36 with about three minutes left on the clock. Parrow responded though with a pair of and-ones and a 2-pointer as Southwick (10-10) quickly pushed it back to a double-digit lead.
“I just had to dominate a couple times down the court, get it done, seal the win,” Parrow said.
Southwick salted away the game in the fourth quarter with some timely baskets and made free throws.

Party-crashers
Westfield Technical Academy 53, Pathfinder 48
Westfield Tech rallied from a four-point, first-half deficit, scoring 21 points in the third quarter to spoil Pathfinder’s “Senior Night” festivities.
“I was very proud of the way our players kept their composure and took care of the ball,” said Westfield Tech coach Kyle Dulude, whose team, with a second-place finish in the league qualifies for the postseason. “The guys are looking to try and make some type of Cinderella effort in the Western Mass tournament.”
Westfield Tech converted 9-of-13 free throws.
Brody Zabielski and David Tikhonchuk each had 15 points to lead Westfield Tech. Zabielski was 7-for-10 from the foul line. Tigers’ Josh Bush had 10 points, while Derrien Wilson-Grant chipped in nine.
“It was awesome to see these guys come together and be successful,” said Dulude, whose team managed a postseason berth despite graduating eight seniors last year.