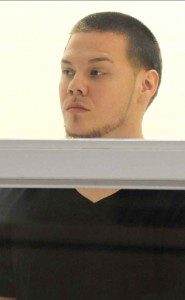 Raymond M. Boissonault stands behind a security window in Westfield District Court as he listens to Judge Philip Contant during his arraignment Tuesday on charges including assault with intent to murder stemming from a shooting incident on Birge Avenue Friday evening. (Photo by Carl E. Hartdegen)

WESTFIELD – City police have arrested a West Springfield man in connection with a downtown shooting incident Friday that Capt. Michael McCabe said confidently “was not a random shooting.”
McCabe reports that police investigating the incident described by the victims as a robbery found that “parts of the story didn’t ring true” and said that investigators quickly formed the impression that parts of the story were being left off by the victims.
The two victims, a male Springfield resident and a female resident of Powder Mill Village on Union Street, had said that the were out walking in the area of Birge Avenue Friday evening when they were accosted by a robber who shot the male victim during the robbery attempt.
Detectives canvassed the area on Saturday and the information developed did not agree with the victims’ account so they were asked to return to the station for another interview.
The two victims were interviewed separately Monday evening and, when confronted with the inconsistencies in their original story, another version of the events unfolded.
In the new account, the two victims and the suspect had been together, for an unspecified purpose, on Birge Avenue.
The victims said that during their discussion the suspect, later identified as Raymond Michael Boissonault, 22, of 49 Lowell St., West Springfield, kept his hand in his pocket as an argument developed, the victims said, and they heard a “clicking” sound which McCabe said would be consistent with the noise made by repeatedly engaging and disengaging the safety switch of a pistol.
The victims told police that, during the argument, Boissonault produced a handgun and pointed it at the female victim.
McCabe said that the male victim then pushed the female aside and gallantly interposed himself between the weapon and the woman.
“Boissoneault is alleged to have fired at the victim, and missed him”, McCabe said, and a scuffle ensued in which the man’s gun was discharged twice more with one of the bullets penetrating the male victim’s thigh.
The suspect then fled, the victims report, and they called police, apparently after agreeing on a story to give to the responding officers.
The man was transported to Baystate Medical Center where he was treated, released and returned to the police department.
Once the true account was revealed in the Monday interviews, the male victim identified the suspect and the detectives went to work searching for the man.
McCabe reports that the detectives spotted the suspect on Main Street where he was waiting for a bus and took him into custody.
Boissonault was found to be in possession of a quantity of cash and a considerable amount of marijuana.
Det. Sgt. Stephen K. Dickinson reports that Boissonault consented to a search of his home by the detectives who found a quantity of ammunition in his residence but no firearm was found.
He was charged with two counts of assault with intent to murder, attempted murder, assault and battery with a dangerous weapon, discharging a firearm within 500 feet of a building, possession of ammunition without a firearms identification card and possession of a Class D drug with intent to distribute.
He was arraigned in Westfield District Court Monday and held in lieu of $100,000 cash bail without prejudice.
McCabe praised the work of Dickinson and his detectives calling their work on the case “a terrific piece of police work.”
“It amazing how relentless the detectives were”, he said, and said Dickinson is “like a dog with a bone” which he is “just not giving up.”
McCabe also said that the prompt resolution of the case and the outcome shows that “There are not people laying in wait to rob you in the downtown corridor.”