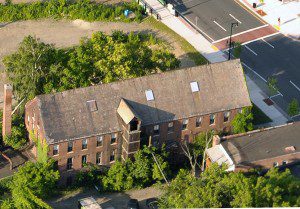 The large brick and mortar building next to the southbound Great River Bridge is the home to the Westfield Whip Mfg. Co. Inc. The company was established in 1884 and is located at 360 Elm Street. (File photo by chief photographer Frederick Gore)

WESTFIELD – The members of the Legislative & Ordinance Committee voted 3-0 last night to give a positive recommendation to the full City Council of a resolution authorizing Mayor Daniel M. Knapik to enter into preservation restriction with Westfield Museum Inc., for the purpose of restoring and maintaining the city’s last active whip factory at 360 Elm Street.
Attorney Peter Martin, president of Westfield Museum Inc., presented details of the restriction to the L&O members’ proposals for the historical preservation of the exterior of the factory.
The building was constructed in the late 1800’s when there were 40 active whip-manufacturing plants in the city. The building, located at 360 Elm Street, is the last of those plants that contains, and still uses, much of the machinery from that period in its current whip production, machinery that was designed and built in Westfield. Patent documents for that technology will eventually be part of the museum display. The building, constructed in 1894, is currently listed on the National Registry of Historic places and the state registry as well, Martin said.
The City Council approved the appropriation of $737,470 from Community Preservation Act accounts at its Feb. 25 session, with $379,985 coming from the CPA reserve for historic preservation account and $357,485 from the undesignated reserve account.
Martin said the restriction would preserve and protect the exterior of the historic building in perpetuity. Restoration plans include cleaning the exterior brickwork, removing vines, and restoring the original windows of the building.
All restoration work must comply with the standards established by the Secretary of the Interior, who oversees the National Registry of Historic Places, Martin said. The preservation restriction, approved by the Westfield Historical Commission, also has to be reviewed and approved by the Massachusetts Historical Commission.
“This is Westfield’s signature industry,” Martin said, “so the city has a vested interest in maintaining the exterior envelope of this building in perpetuity. Any changes would have to be approved by the Historical Commission.”
The museum concept was initiated to create a living museum at 360 Elm Street but Carol Martin, who owns the Westfield Whip Manufacturing Company, said that WHIPP, Inc., merged with Westfield Museum Inc., a group formed to showcase the city’s industrial history, thus expanding the scope of the original living museum concept to include a display area that will be used for other aspects of the city’s industrial past. The merger of the two 501-C3 organizations was effective as of July 1, 2012.
The Community Preservation Commission had awarded $72,500 in 2010 to Westfield Historical Industries Preservation Project (WHIPP), Inc. for the feasibility study to develop a business plan and assess the viability of establishing the living museum. WHIPP hired Bill Hosley, a principal with the Terra Firma Northeast consulting firm, to act as the project manager with the lead in developing the feasibility study. Hosley previously served as the chief curator and exhibition developer at the Wadsworth Athenaeum in Hartford and is an expert in heritage tourism.
That study also included an engineering assessment performed by Tighe & Bond of the current whip manufacturing structure to determine suitability of creating the museum in the historic building. Local architect Chris Carey has developed a design of the museum facility within the building.
Martin said the feasibility study also assesses the viability of operating a museum in the neighborhood that has undergone extensive enhancement as part of the Great River Bridge project. One of several parks built as part of the bridge work is directly across the street from the whip manufacturing building.
Martin said the whip plant is in need of additional parking to support the museum concept, but that the city now owns the land around 360 Elm Street and will need to provide additional parking to facilitate the recreational use of the new riverside parks and Riverwalk along the Westfield River Levee.
The merger with Westfield Museum Inc., creates a non-profit corporation structure to maximize the museum’s chances of success.
Ownership of the building would be transferred to the non-profit entity and operated through a board of directors. Westfield Whip Manufacturing would be a tenant and continue to manufacture whips as a living museum display.
The cost of totally renovating the building is more than $4 million. Martin said that is a long-term goal of the group.