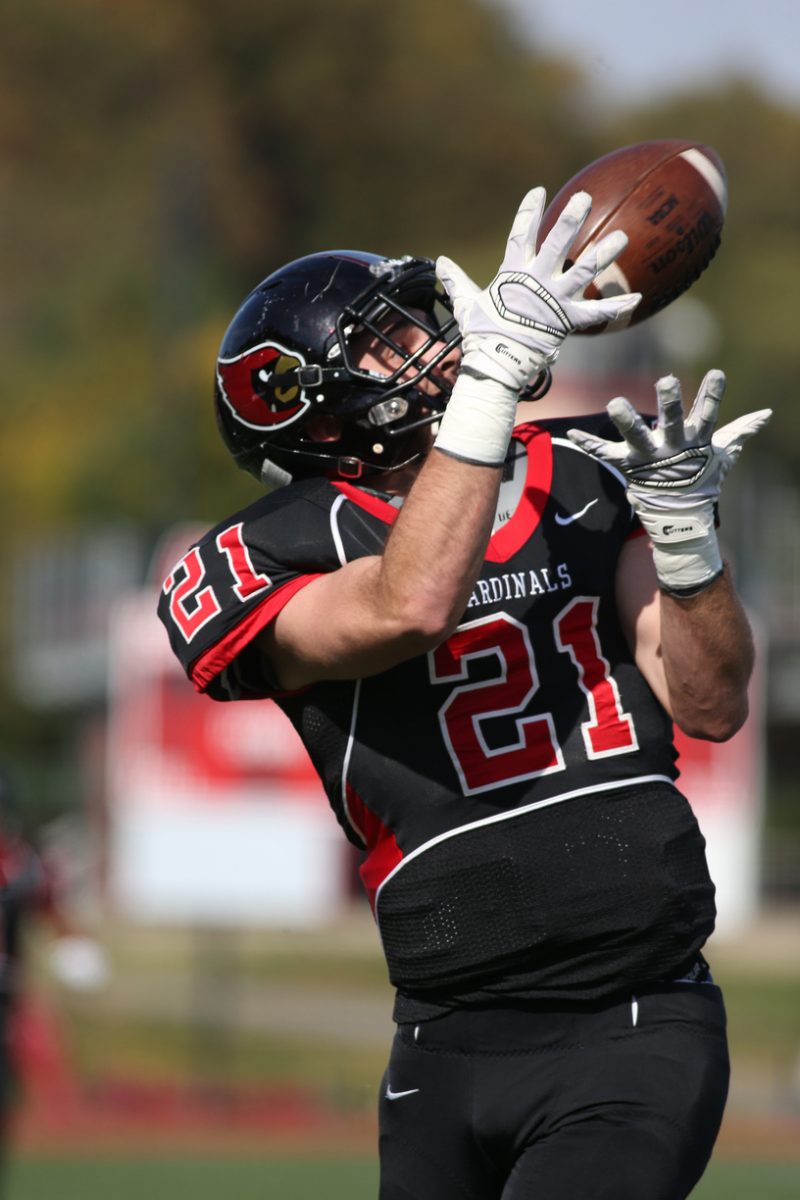 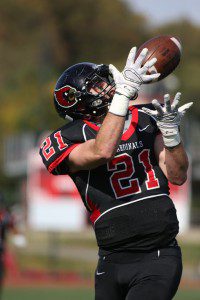 WASHINGTON D.C. – Former Westfield High School quarterback Billy Smith is catching on at the next level in a big, big, big way.
A 5-foot 10-inch slot receiver for the Catholic University of America Cardinals football team, Smith caught three touchdown passes Oct. 31 against Guilford College (Greensboro, N.C.), the Old Dominion Athletic Conference’s top-ranked defense at that time. His final TD of the day came with 34 seconds remaining in regulation to cut the Quakers’ lead to 52-49 in a shootout.
Although CUA failed to complete a comeback victory – and went just 3-7 in the regular season – Smith made huge gains for the Cardinals dating back to his first game in 2014 when he caught a 44-yard scoring strike.
Since that point, Smith has become a solid special teamer, excelling at punt and kickoff returns, partially blocking a punt, rotating in to various defensive positions, and filling in for an injured teammate at wide receiver, quite admirably, in fact.

In his first full-fledged effort at wideout Oct. 31, Smith posted a career day, hauling in four receptions – three went for scores – and a total of 76 yards. The former Bombers’ product arrived on the national collegiate level for the first time.
“We were a wide receiver down (leading up to the game against Guilford) … so I received more reps,” Smith said. “I got in a good week of practice, and took advantage of my time out there.”
The other source of his inspiration on that memorable day – a couple of familiar faces in the stands.
Smith’s grandmother, Carol, and grandfather, Jim, a former Deerfield Academy football coach who also coached high school football in Western Massachusetts for 52 years, were in attendance for Billy’s 3-TD game.
“Every time they’re in the stands, it brings extra juice in me,” said the Cardinals’ WR, who also scored a touchdown with his grandparents in attendance during a game in 2014. “Coach told me he needs to find some extra funds in the budget to fly my grandparents out to every game.”
All kidding aside, Billy Smith has been hauling in more than just catches over his young career. 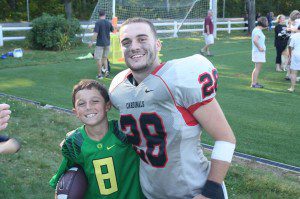 The former Bomber earned Team MVP honors at Deerfield Academy in consecutive seasons before graduating Deerfield Academy in 2013. He was named All-Conference in football at Westfield High in 2011, and was an All-Western Mass. selection his sophomore and junior years there.
Despite having already moved well past his glory days as a Bomber, Smith plans to show his support for his old team by attending next Thursday’s Thanksgiving Day football game between Westfield and Cathedral at Central High School – the two teams kick off at Central High School at 10:30 a.m.

“We come back for the tradition,” Smith said. “For the players playing in this game, it’s all about getting to play on ‘turkey day’, spending time with family, and the ‘old’ guys who come back.”
Speaking of coming back, Smith will return to CUA for his senior season. He is scheduled to graduate as a Business/Marketing major in 2017.
CUA graduates its starting quarterback, senior T.J. Tutone, who led the nation in completion percentage this past season in Division 3 college football, as well as several players at other key skill positions. But that just means, Smith will get an even bigger chance to shine in 2016.

To get a special look at this year’s Thanksgiving Day football game, featuring the Westfield Bombers and Cathedral Panthers, pick up your copy of The Westfield News next week. Our special preview edition will be published Wed., Nov. 25. A full recap and photos of the big game will be available for purchase Fri., Nov. 27. Stay up-to-date on all of the turkey day festivities online at thewestfieldnews.com.