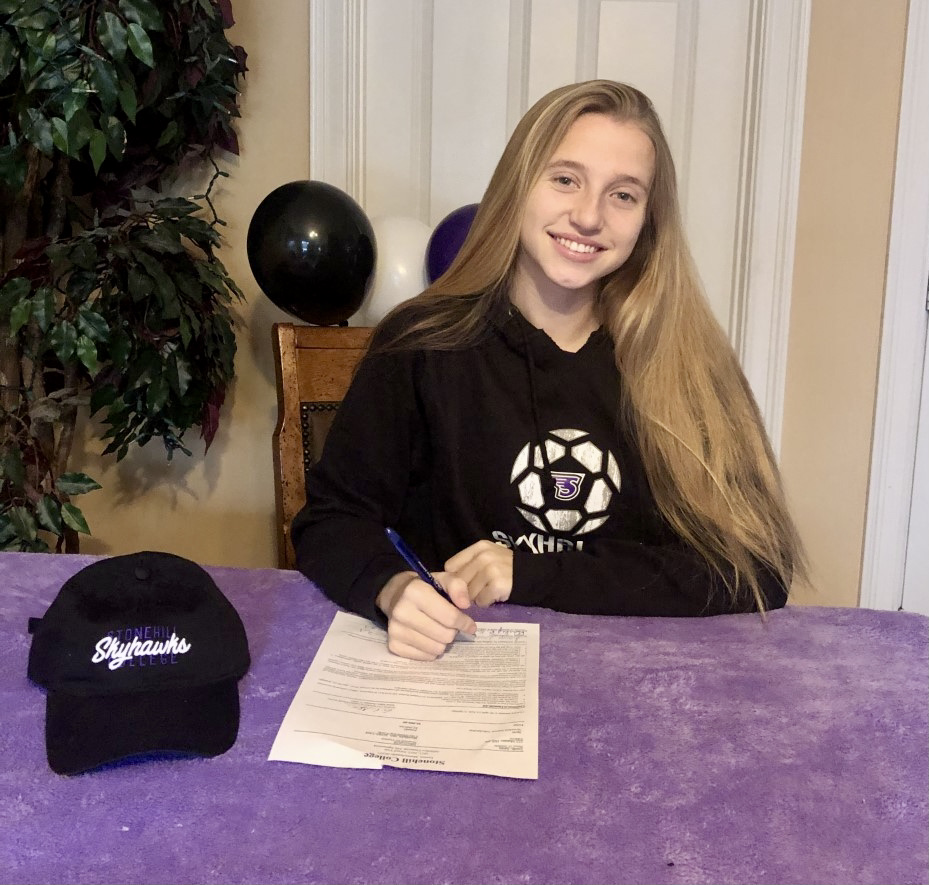 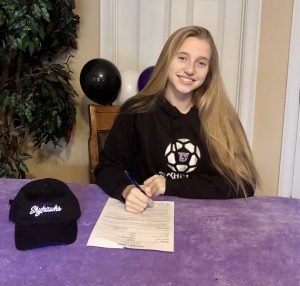 Westfield High School senior student-athlete Saige Smith signs her National Letter of Intent to attend Stonehill College where she will play women’s soccer for the Skyhawks this fall. (SUBMITTED PHOTO)

WESTFIELD – Chandler Pedolzky … Emma Pedolzky … Catie Bean … and now Saige Smith.
Late last year at an official signing day, Bean and twin sisters Chandler and Emma Pedolzky inked their National Letters of Intent to play soccer for Division 1.
Bean and Emma Pedolzky announced their intentions to take their talents to Bryant University. Chandler committed to the University of Massachusetts-Amherst. Smith completed the soccer circle recently, committing to play for Division 2 Stonehill College.
“I’m super excited,” Smith said. “I always wanted to play college soccer. Opportunities were hard to find with COVID, but everything fell into place.”
While the final pieces came together over the course of the last couple years, the wheels were set in motion more than a decade ago.
Smith began playing soccer at the age of four. Even though at that time she lived in Southwick, she played premier soccer at 8-years-old, alongside future Western Mass All-Stars on the Western United Pioneers.
At age 10, Smith moved on to play for the FC Stars, which boasted Smith’s best friends, the Pedolzky sisters, Bean, and Ally Piper. The team was coached by current Westfield High School girls soccer head coach Ryan Lavner. 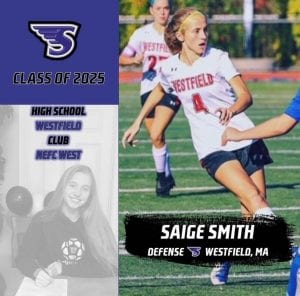 “It was honestly a great experience for all of us,” Smith said, praising her fellow teammates and a head coach who was there when she was little and during her years as an upperclassman. “That chemistry helped us.”
Smith joined her current club team, NEFC West Elite, five years ago. In their fourth season together, they won the State Cup National Championship in Denver, Colorado, and were most recently ranked first in the state and fourth nationally, according to WeGot Soccer Rankings.
The success did not stop there.
Smith went on to win the West Division 1 girls soccer championship with Westfield High School two seasons ago. It was a historic moment for the player and her team. The Bombers nearly became state champs, suffering a narrow 3-2 loss to Bishop Feehan in the finals. The opposition scored with just 20 seconds remaining in the game.
“I can definitely say it was the most fun I ever had in my life,” Smith said. “That run … was amazing. We worked so hard to get there. It was an amazing experience.”
Smith played several positions from attacking midfield to forward to defense, where she was voted best defensive player on her team and received first team All-League and second team All-Western Mass honors.
Smith did not let the pandemic slow her down. After helping bolster Westfield’s top spot among Western Mass girls soccer teams this past fall – – there was no tournament due to COVID – – she and several of her soccer mates wrapped up a successful basketball season. She was the co-captain. 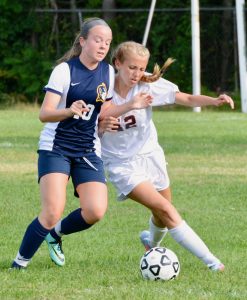 “We continued to get better every week and never put our heads down even though we knew there would be no tournament,” she said in describing the hoops season.
Enjoying life as a two-sport athlete should give Smith an edge against the competition as she moves forward with her career. Statistics show that the best college and pro athletes are typically those players who play more than one sport in high school and at the youth level.
“I think cross-training is better than one sport specifically,” Smith said. “Playing basketball helped me develop more skills and more strengths and taught me more than I would have without it.”
Smith plans to challenge herself even more this offseason before she heads to Stonehill – – the Skyhawks were ranked in the top 25 nationally in 2019 – – when she returns to NEFC West Elite to play for coach Lauren Aldred. The team is expected to compete in a higher division this season.
“I expect to play a lot of games,” Smith said. “I know I will definitely be in shape because I will be training hard. There’s going to be a lot of soccer.”