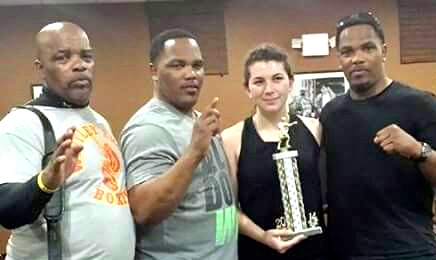 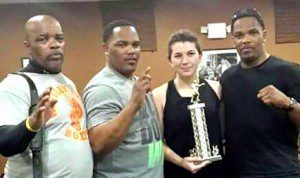 Taylor Smith, of Westfield (second from right) displays a trophy alongside her team of coaches from Whitley Brothers Boxing in Holyoke. (Submitted photo)

WESTFIELD – For several years, 17-year-old Taylor Smith, of Westfield dribbled around a soccer ball on local playing fields. Now, for kicks, she’s landing punches in the ring.
On Feb. 7, Taylor “The Gift” Smith (1-0) will collide with Miesha Tuitt (1-1) in a battle of 152-pound amateur boxers fighting for the Western New England Golden Gloves championship at the MassMutual Center in downtown Springfield.
The match will be one of more than a dozen bouts scheduled to take place that night, beginning at 7, to determine who moves on to the New England Golden Gloves Championships in Lowell, and eventually the nationals in Las Vegas, Nevada. 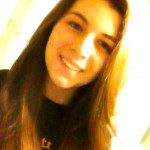 “Just to be able to (box) is a lot of fun,” said Smith, who began boxing competitively just six months ago. The young boxer is also a National Honor Society student at Westfield High, and track athlete.
Smith said she has gained several new friends, and has been embraced by the boxing community at Whitley Brothers Boxing, located in downtown Holyoke. She gravitated to the sport for its nature of rewarding often the strongest, fittest athletes. 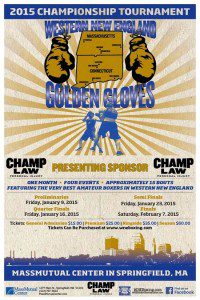 “I like that what you put it in is what you get out of it, and the support is great,” she said.
Smith has been active in martial arts for the last year. During that time, while crosstraining at the Holyoke gym, she took notice of the boxers training on their side of the facility. She hung up the soccer cleats, and committed entirely to the sport of boxing.
“I really like that (boxing) is more of an individual thing,” the young boxer said. “In soccer, I became frustrated when I saw other players not giving their all.”
Smith gave it her all last June to win her official debut amateur boxing match against Esther Micena (Conn.), 17, by unanimous decision, following three two-minute rounds, in what was deemed “the fight of the night” at Nomads Adventure Quest in South Windsor, Conn.
A much tougher opponent figures to loom in next month’s match.
Smith will face Tuitt, a 24-year-old, who hails from Tazmania Gym in Springfield.
“I expect her to come in hard in the first round … and try to knock me out as fast as possible,” Smith said. “I’m going to try to use my speed and conditioning, and be a lot more technical. I hope to have my wind in me by the third round.” 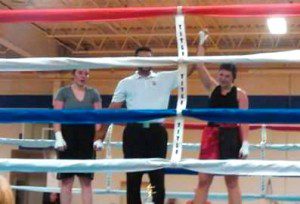 Taylor Smith, of Westfield, celebrates her first victory in the ring. (Submitted photo)

This is the first year that the prestigious Golden Gloves tournament is being held in Springfield. The tourney was held in Holyoke from 1957-2003 before being relocated to venues throughout Connecticut. A large push by former Golden Gloves leaders and enthusiasts brought it back to Holyoke in 2013.
According to tournament officials, overwhelming support and demand for tickets forced a move to the MassMutual Center to accommodate the tournament’s growth and popularity.
Western Massachusetts has been home to professional and amateur boxers. Many Golden Gloves champions have begun or furthered their careers through the Western New England tournament. Boxers such as “Iron” Mike Tyson, Larry Davis, Kevin Rooney, and others, have participated in Golden Gloves events.
Smith likens her demeanor inside the ring to that of Laila Ali or Floyd Mayweather, save for the cocksure attitude. Should the young female boxer from the Whip City defeat Tuitt, though, there just might be a little more swagger in that step toward nationals.