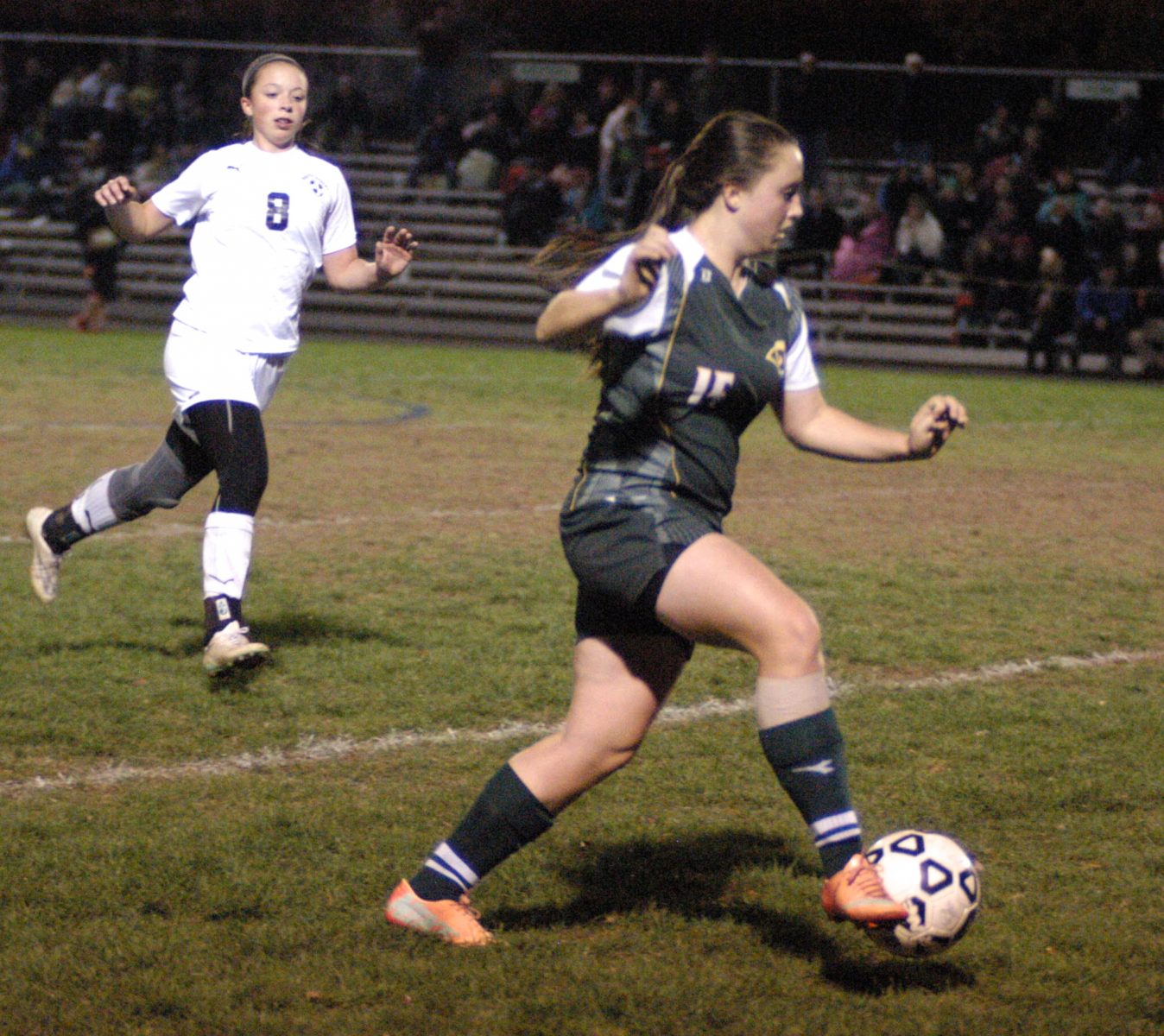 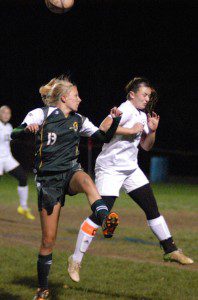 SOUTH HADLEY – No one deserved to lose, but there had to be a winner.
No. 8 South Hadley survived 100 scoreless minutes, outlasted 10 penalty kicks – the Tigers prevailed in PKs, 3-2 – and advanced to the quarterfinal round of the Western Massachusetts Division 3 girls’ soccer tournament with a 1-0 shootout victory over ninth-seeded Southwick Monday night.
South Hadley’s Jay Casolari struck the game-winning penalty kick after a grueling tourney opener. Southwick proved a worthy foe, and nearly pulled off the upset.
The Rams had some opportune moments to score late.
Krista Girroir performed a sensational handspring throw-in from about the 10 yard line that carried directly in front of the net in the 75th minute, setting up a scoring opportunity for Southwick. The goalie came out of the box to make the initial save. The ball rebounded to the Rams for another shot, but a defender stepped in to clear the ball. 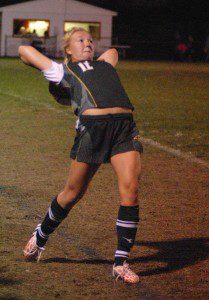 Southwick throws in the ball from the sideline Monday. (Photo by Chris Putz)

Southwick’s Sabrina Provost made a last ditch effort to end the game in regulation, lofting a long floater at the goal from about 20 yards out just before the buzzer sounded. South Hadley goalie Sophie Gatzounas hugged the ball for a save.
Both teams traded corner kicks in the first overtime.
South Hadley’s effort came early, and amounted to nothing. Provost’s pinpoint corner kick, late in the period, was turned away.
In the second overtime, South Hadley had the perfect chance to end it with a direct kick in the waning minutes but booted the ball wide.

Southwick goalie Tori Richburg makes a sensational save during the shootout portion of Monday’s playoff game at South Hadley. (Photo by Chris Putz)

In the shootout, both teams managed just one successful penalty kick apiece – a goal from Southwick’s Lydia Kinsman and South Hadley’s Emma Slysz.
In the extra shootout, the stalemate continued.
Stephanie Devine lofted a beautiful floater into the upper right corner of the net for a successful Southwick kick. Lexi Gawron responded with a made goal for South Hadley.
Three penalty kicks later, a winner was determined when Casolari followed up a Southwick miss with a game-winning PK. Rams’ goalie Tori Richburg came up with several key saves through regulation, overtime, double overtime, and made a spectacular diving save on Katie Evans’ PK shot to the far left, pouncing on the ball just before it crossed the goal line on the teams’ seventh attempt in shootout. Another miraculous save was not in the cards.