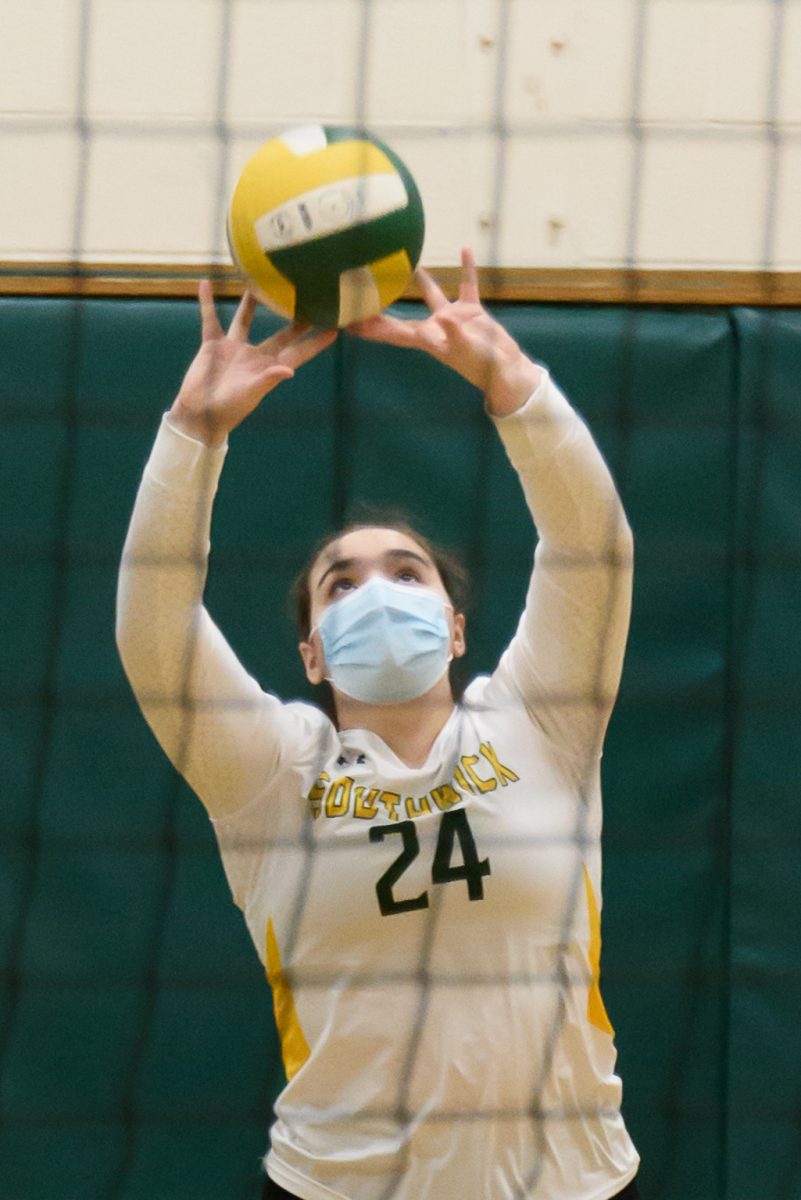 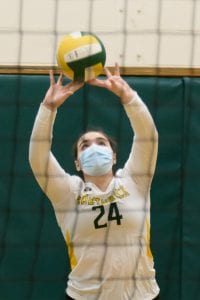 SOUTHWICK – The Southwick Girls Volleyball squad hosted South Hadley Wednesday for the second night in a row, hoping for a much different result than the first matchup.

The Tigers served up Southwick’s only loss Tuesday night, winning an exciting match 3-2. The visitors began the match with an ace. Unrattled, The Rams quickly took back the lead with the help of an ace of their own by Sarah Cerone. The set continued with the game being tied at 3, 4, 5, 6, and 9. South Hadley scored the next three points to take a 12-9 lead. The Rams refused to falter, tying the score multiple times.

However, the Tigers would not let the lead be taken from them, pulling away for the 25-17 first set win.  The second set was vastly different from the first. The Rams took the lead on the first serve, and never surrendered the lead. Cerone provided the power with two perfectly placed kills en route to a 25-9 match-tying win. Kaitlyn Haseltine, Victoria Burkovskiy, Aniya Kamara and Kayla Andrade also contributed kills in the set.

In what seemed like an instant replay of Tuesday’s match, the second set Wednesday provided some exciting drama. South Hadley sprinted out to a 3-0 lead to start the third game. Southwick crept back into the game, tying the score at 4, and taking the lead behind Alexandra Methe’s strong kill shot and then an ace. The Rams held on to the lead until South Hadley tied it at 9 following a long rally. The lead went back and forth until the Tigers began to pull away at 13-12.  South Hadley then pulled away to increase the lead by 4, until the home team produced what turned out to be their next-to-last comeback. South Hadley tied the game again at 17-17 before pulling away again to take a 24-20 lead. The Rams then decided they would not fold. They scored the next 4 points in thrilling fashion. The tying score coming on a powerful kill by Andrade. Southwick then scored the final two points to win the set 26-24, swiping a 2-1 lead in the match. The fourth set was as tight as it could be for the entire game. The score was tied 12 times and the lead was passed back and forth on 9 different occasions. The final tie was at 14 points apiece. Southwick then pulled away with the help of a 5-0 run, and held on to down the Tigers 25-18, avenging Tuesday’s loss 3 sets to 1. Southwick Head Coach Kaitlyn Anthony said her offense was more consistent Wednesday. When asked what the difference was, she said “We executed better offensively, even serves. We struggled with a mental game yesterday and we were cohesive and calm today.” She added, “We responded well to adversity today,” referring to an injury sustained to outside hitter Aniya Kamara in the third set.

Kamara did not return to the match. Senior Victoria Burkovskiy said “Our energy was sort of down (yesterday) for whatever reason but I think today we were having a lot of fun on the court.”