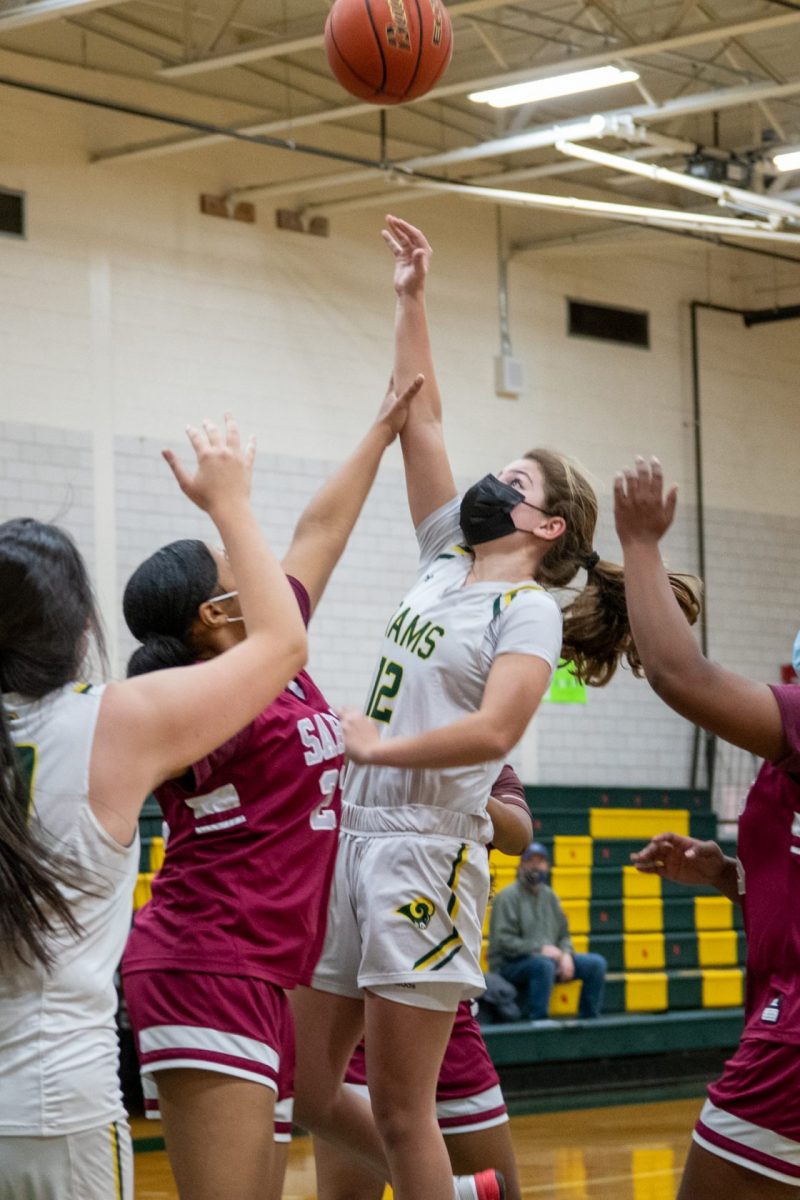 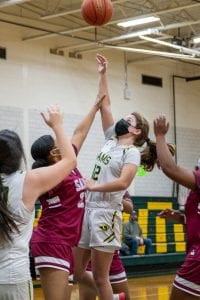 In the lane Maeve Turmel (12) floats a shot over the Sabis defender. (BILL DEREN PHOTO)

Southwick set the tone for the rest of the game with defensive stops for the first five Sabis possessions.  The Bulldogs defense refused to take a back seat with a tough zone defense of their own.

Both teams traded baskets to tie the score at 4 halfway through the first quarter. Sabis then went on a 9-0 run to take the lead at 13-4.  Southwick added a pair of free throws to end the first period, trailing 13-6.

Both teams continued the defensive tone, with neither team scoring until the 6:00 mark of the second.

Sabis outscored Southwick in the second quarter 10-4, with each team earning every bucket they made.  The scoreboard at the half had the Bulldogs leading 23-10.

Southwick opened the scoring in the second half with a free throw by Maeve Turmel followed by a huge 3-pointer from Hannah Burke. Once again, both teams relied on ferocious defense to hold each other to just four points in the third quarter.  SABIS led after three periods, 27-14. 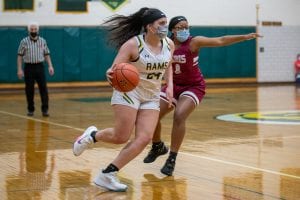 The fourth quarter was more of the same as the first three periods – more defense. Neither team scored until the 5:33 mark, with Southwick sinking a free throw. With the use of a relentless defense, the Rams held Sabis scoreless until there was 3:12 left in the game. The Bulldogs scored just five points in the final frame, all on free throws.

Southwick added eight points in the quarter, leading to the final score.

Southwick coach Brittany Sleight was extremely proud of her team despite the loss, especially on defense. 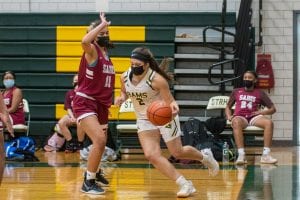 After a long rebound Annette St.Jaques (2) drives out of the corner. (BILL DEREN PHOTO)

“We’ve been practicing a different defense lately and the girls have been putting in the work, so it’s definitely paid off”, coach Sleight said following the game.  “We stuck with the plan from the get-go and overall it worked out.”

Southwick allowed just two Sabis field goals in the second half, both coming in the third quarter.