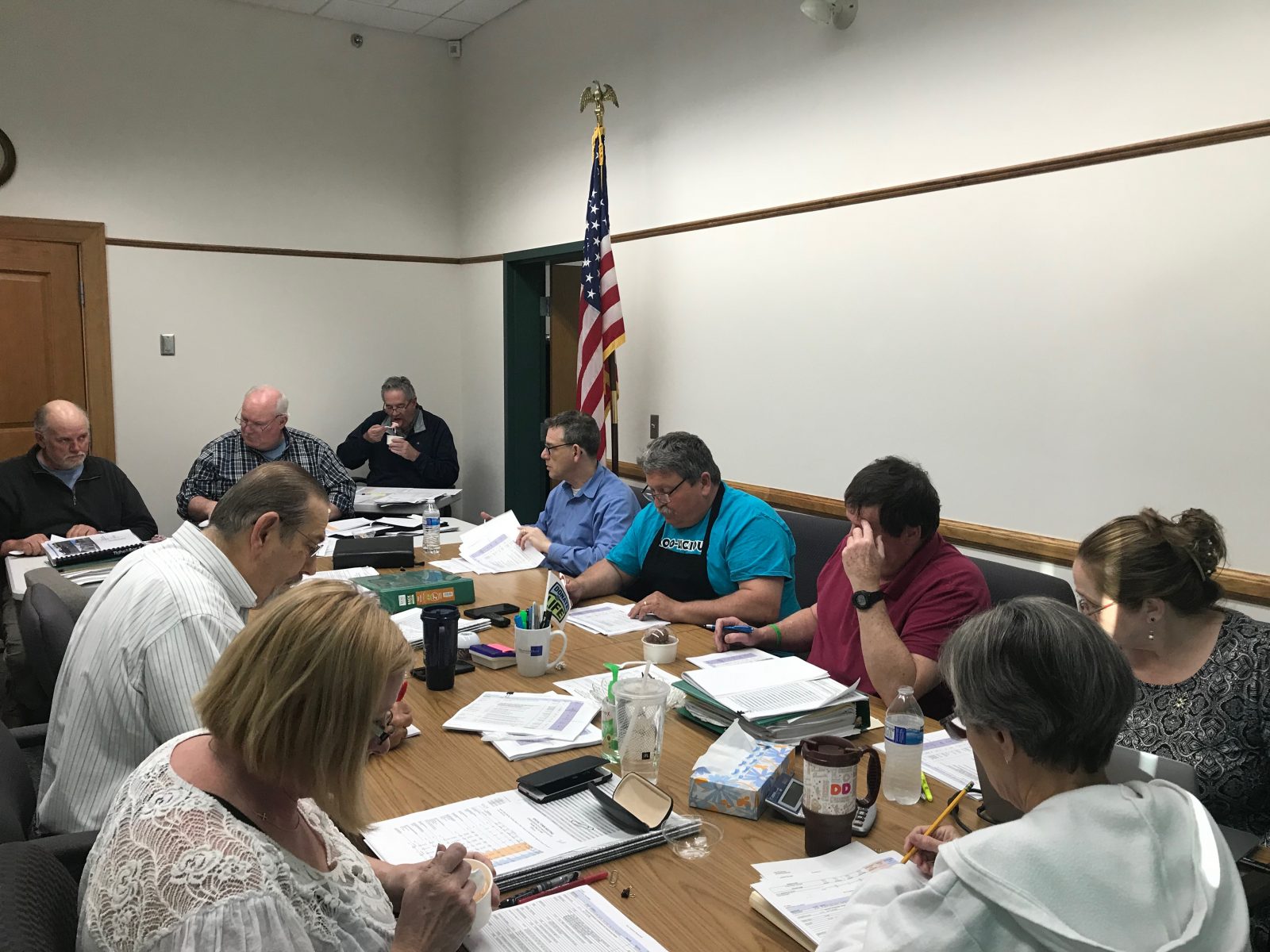 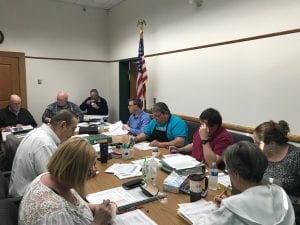 The Select Board and the Finance Committee met on Tuesday night to discuss the budget and the upcoming town meetings. (Photo by Greg Fitzpatrick)

SOUTHWICK – The Select Board and the Finance Committee held a joint meeting on Wednesday night to discuss the proposed town budget for Fiscal Year 20 and the drafted articles for both the special town meeting and annual town meeting.

When reviewing the FY20 budget, the Select Board and the Finance Committee went through the general fund for each of the town departments.

Looking at the police department, the boards agreed to Chief of Police Kevin Bishop’s request for a line item of $56,000 to hire a full-time communications center supervisor. That person is expected to oversee the dispatch department.

Moving through the budget, there was some discussion about the request from the Southwick Public Library to extend the hours of the children’s librarian position from 22 ½ hours to 37 ½ hours. Finance Committee Vice-Chairperson Linda Bathel advocated to the rest of the attendees about accepting the library’s request, which would cost an extra $15,693.

“The library has every single age bracket in the community, they have so many people coming in there all the time,” said Bathel. “I really think we need to give them the support they’ve been asking for and always have been denied.”

Although fellow Finance Committee member Art Pinell said that the library does do a great job and service to the town, he didn’t believe the request was appropriate due to the other financial situations Southwick is facing.

“It’s not unreasonable to ask them to work within the parameters because these are tough times,” said Pinell.

After the boards voted in favor of not allowing the hours of the children’s librarian to increase, Russ Fox, the Vice-Chairman on the Select Board, did recommend that they revisit this issue once a new Library Director is hired this summer.

After the budget review, Town of Southwick Chief Administrative Officer Karl Stinehart went through all of the articles for the annual town meeting which will take place on May 21.

Articles six and seven feature the two citizen’s petitions, which are to see if the town will allow the seven-member Finance Committee and four of the appointed members of the Community Preservation Committee to become elected officials instead.

The next article will be requesting a borrowing authorization of $2,543,300 for the Department of Public Works to conduct road projects throughout town. Some of those roads already included are Robin Road, Nicholson Hill Road, Fred Jackson Road, Granville Road, South Longyard Road, South Loomis Street, Cedar Street, and Bonnieview Road. The borrowing authorization is part of a six-year capital plan for roads in town, where DPW Director Randy Brown would like to spend about $3 million each year.

With several other roads being a part of the capital improvement plan, Select Board Chairman Joe Deedy informed the Finance Committee that the $2,543,300 will only go so far for this year.

“That’s why we really want to see how far we can go,” said Deedy. “Expect next year to have the same conversation.”

Article nine consists of another borrowing authorization for improvements on the Southwick Fire Department building. The warrant article is to see if voting residents will allow the town to bond about $300,000 for the design and permitting portion for constructing masonry and a new roof on the building. This warrant article is from the feasibility study that Tighe & Bond was hired to conduct by the Town of Southwick for all municipal buildings.

Stinehart explained the importance of the feasibility study to the Finance Committee, which was discussed with Tighe & Bond on Tuesday night at the Select Board meeting.

“These buildings are over 20 years now so we know this is happening,” said Stinehart. “This project is helping us figure out what needs to happen and in what order.”

The Select Board then added that they’ll be looking to hire a project manager specifically for the project on the Southwick Fire Department building. It was pointed out that years ago when the current building was constructed, it wasn’t constructed properly and the town doesn’t want to go through that again.

“I think this board has zero tolerance for any more screw ups moving forward,” said Deedy.

The Select Board and the Finance Committee will be meeting together again soon to finalize the budget and the warrant articles for both the special town meeting and annual town meeting.