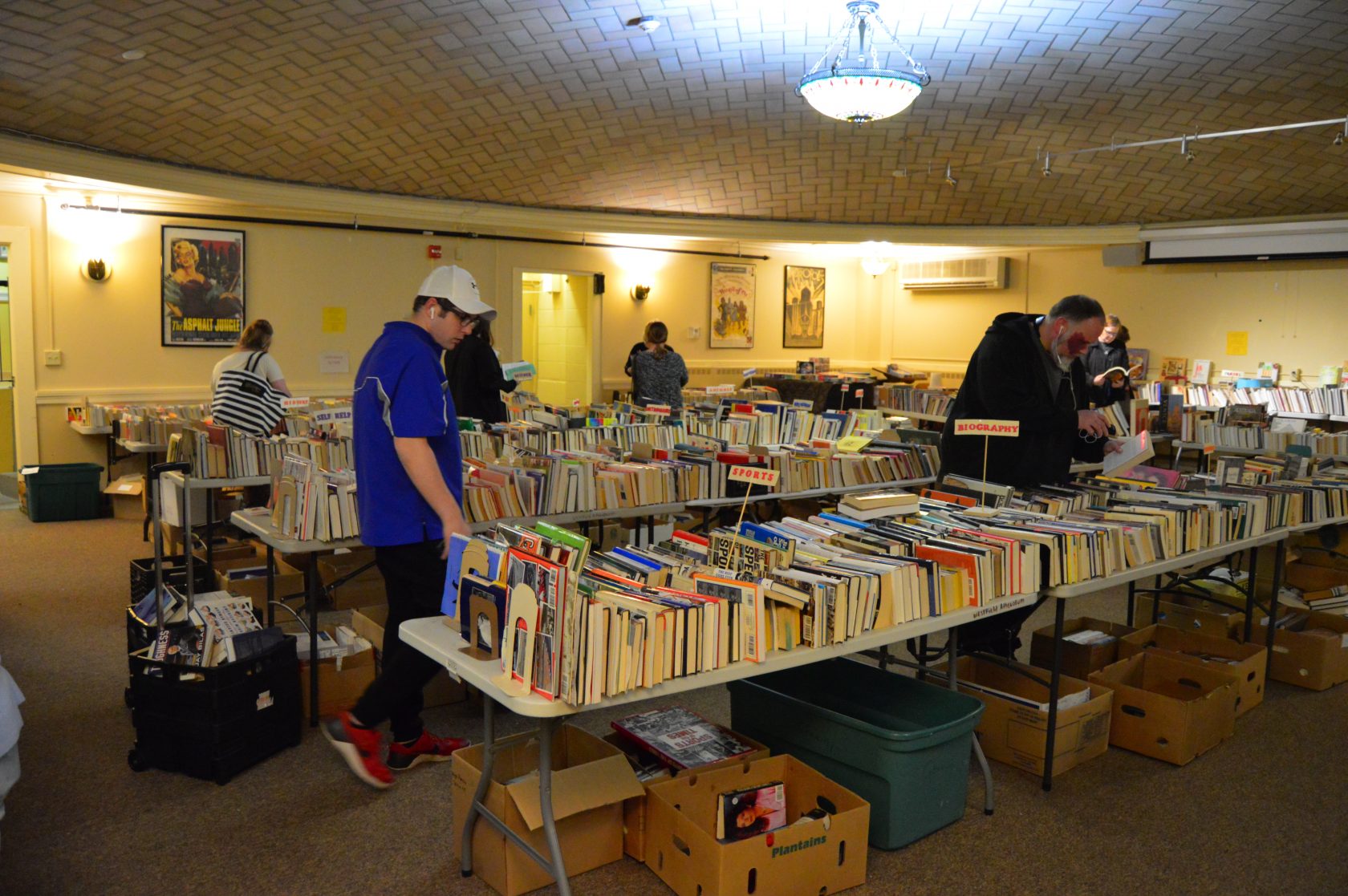 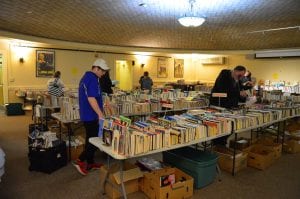 People browsing the wide selection of books during the Athenaeum’s preview night for the book sale. (Photo by Peter Currier)

WESTFIELD- The Friends of the Westfield Athenaeum began their 2019 Spring book sale in the Athenaeum’s Lang Auditorium on Wednesday.

This year’s Spring Book Sale is in dedication of Robert Hullivan, who was a fixture of the annual sales and was there each year assisting people as they came in. Hullivan passed away just last November, and the Friend’s of the Westfield Athenaeum decided to keep his name with the sale and honor him throughout the event.

“He had done the book sale many times before, so we decided to name the sale after him this year,” said Heidi Cassell, a member of the Friends and volunteer for the book sale.

Although the book sale officially begins for the general public on Thursday, there was a preview night on Wednesday during which teachers and Friends of the Athenaeum were allowed inside. The idea is to allow teachers to get first dibs of any books they believe they need for their classrooms. Although there had previously been an admission charge for the preview night, the Friends chose to allow teachers in for free. A five dollar coupon was given to teachers during that night.

As of the preview night, there were thousands of books in wide ranges of genres available for purchase. There is everything from fiction to cookbooks to science books. Cassell said that the funds raised from the sale will be used to pay for the many programs and events the Athenaeum has to offer. 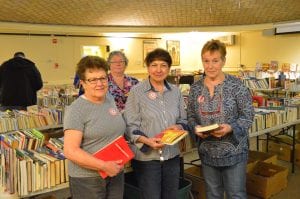 From left: Evelyn Calleva, Donna King, Clair Rodgers, and Heidi Cassell. They all volunteered their time to assist with the Athenaeum’s book sale. (Photo by Peter Currier)

The pricing for each book is fairly simple. Paperbacks cost 50 cents while hardcover books cost one dollar. All DVDs and computer games are also just one dollar. Cassell joked that she often has VHS tapes out during the sale, but chose to leave them because nobody seems to buy them anymore.

The Athenaeum could not have such a sale without paying homage to the Westfield 350th Birthday Celebration. Near the back of the Lang Auditorium is a small shelf that contains books representing Westfield history. As of at least the preview night, there were old Westfield High School yearbooks and history books on display. Cassell said she is trying to pull more items from the library archives to put on display as well.

Cassell noted that there are simply far too many books for them to all be purchased in just a few days, although she would be happy if that did happen. In previous years, there had been a woman who would come after the sale ended and take the remaining books to her own book store. She decided not to do so this year, so Cassell and the Athenaeum are left with the question of what to do with the likely thousands of books that are left over. She said she may at least keep some of the children’s books to use during the toy and book sale in the fall, but Cassell is unsure of what to do with the rest.

“I don’t want to see them get thrown away,” said Cassell.