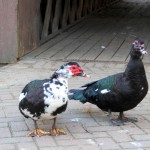 WESTFIELD – The community will be happy to know Stanley Park received a gift of  two Muscovy ducks just in time for the holidays.
Park Managing Director Robert McKean said the ducks were a gift from  resident Jack Jeneral, who, along with the entire community, was  outraged when the park’s Muscovy duck Ozzie was killed by a teenager  last month.
“Mr. Jeneral thought it would be nice to try to find us a couple of  Muscovys,” said McKean.
Muscovy ducks generally live in the south. Ozzie somehow found his way  to Stanley Park and made it his home. McKean said Jeneral was searching as far away as Florida and Colorado  for the ducks.
“There was a post on craigslist from a woman who needed to find a home  for two Muscovy ducks and someone contacted her and suggested she call  us,” said McKean. McKean received a message from the woman, who lives on Cape Cod, on  Sunday. “I called her Monday morning and Mr. Jeneral went to Sandwich Tuesday and brought the ducks here,” said McKean.
McKean said the ducks are quickly adapting to their new home, and  while they can never replace Ozzie, they are a reminder of what he  meant to the community.
“He came here on his own and the kids loved him because he was  different,” McKean said. “We received so many letters after his death  from people who loved him,  and from people across the country who read about Ozzie when Fred’s photo went national,” McKean said,  referring to a photo taken by Westfield News Chief Photographer Fred Gore.
“I received an email from a young woman from a neighboring high school who said she felt like an ugly duckling and when she was having a bad day she would come and talk with Ozzie and felt better,” said McKean.
One of the new ducks is almost identical to Ozzie and the other is all  black with red markings. Contrary to other reports, McKean said the ducks need new names and he invites the community to make their name suggestions via email at [email protected]  by Jan. 1. McKean said he was overwhelmed at the support Ozzie and the park  received after his death.
“The community was so supportive of what happened,” said McKean. “It  has been great how everyone pulled together. We really appreciate it.”