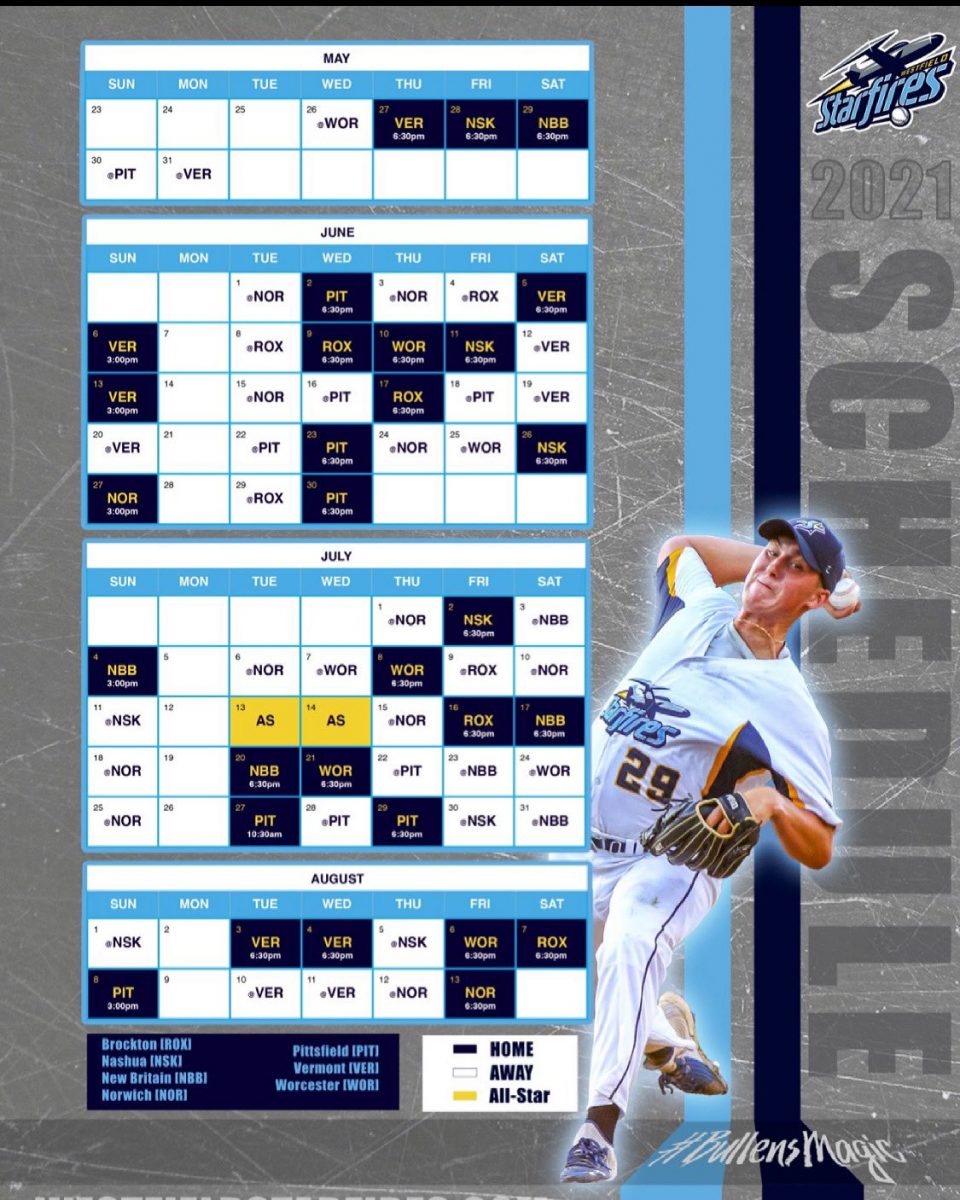 WESTFIELD – The Futures Collegiate Baseball League of New England (FCBL) has announced its schedule for the 2021 season and all eight clubs will be in action on Opening Day, Wed., May 26. The slate includes an expanded, 68-game regular season for the first time in league history.
Eight teams will play in the FCBL during 2021 following the additions of two longtime affiliated clubs in the Vermont Lake Monsters and Norwich Sea Unicorns. The former Class A Short Season New York-Penn League clubs join the Brockton Rox, Nashua Silver Knights, New Britain Bees, Pittsfield Suns, Worcester Bravehearts and Westfield Starfires. The North Shore Navigators (Lynn, Mass.) are no longer a member of the league.
The FCBL looks to maintain its momentum as New England’s most popular summer collegiate league following a safe and successful 2020 season in the midst of the continuing coronavirus pandemic. The league celebrated its 2 millionth fan milestone back in 2019 and looks forward to welcoming fans to all of its ballparks this summer. Following strict protocols, Nashua and New Britain were able to host fans — up to 25 percent of each stadium’s capacity — throughout 2020. Nearly 1,000 fans attended all three championship games at Holman Stadium in Nashua, N.H. 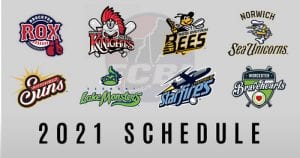 “With just one month to go before Opening Day, we couldn’t be more excited about the 2021 season,” Commissioner Joe Paolucci said. “Not only will this be our longest regular season in league history, but we look forward to welcoming in two former minor league organizations as well as the return of the Pittsfield Suns. This is a great day for the Futures League.”
The regular-season schedule will run from May 26 until Fri., August 13, with the playoffs following immediately through Thurs., Aug. 19. With the exception of Memorial Day (May 31), Mondays will be league-wide off days throughout the summer.
The eight teams will play an eight-game season series with four opponents and a 12-game season series against the other three to complete the season schedule. As a result of the league’s first-ever expansion to Vermont, the Lake Monsters will host many home dates at Burlington’s historic Centennial Field in professional-style, two-game formats with back-to-back contests against the same team.
Highlighting the four-game opening slate on May 26 will be Vermont hosting five-time and defending champion Nashua in its first-ever FCBL game, while Norwich will make its league debut at new in-state rival New Britain. After playing in Leominster last summer, the Worcester Bravehearts will return to Hanover Insurance Park on the College of the Holy Cross campus and entertain Westfield in its season debut. Pittsfield returns to the league following a one-year hiatus with a trip to Brockton.
The season’s second day features Worcester heading to Nashua for a 2020 championship rematch. The Sea Unicorns will make their home debut at Dodd Stadium in Norwich on Monday, May 31.
After opening up on the road, the Westfield Starfires begin a three-game home stand at Bullens Field against the Vermont Sea Monsters (May 27) before taking on the Nashua Silver Knights (May 28), and New Britain Bees (May 29). Each game is scheduled to begin at 6:30 p.m.
“We are stoked to be back on the field,” Westfield Starfires co-owner Chris Thompson said. “We worked tirelessly (to get this schedule) out.”
Westfield natives Aidan Dunn (Eastern Connecticut State) and Jimmy Hagan (Quinnipiac), who both played for the Westfield High School baseball team are expected to rejoin the Starfires this season. One current Bomber, Brian Strange, is also expected to don a Starfires jersey this summer, once the high school season comes to an end.
“When we launched the franchise we made a commitment to have local talent,” Thompson said. “This is just another example of that.”
A highlight of the summer will be the New Britain Bees hosting the FCBL All-Star Game on Tues., July 13. The event was slated to take place in the Hardware City last summer before its cancellation due to the pandemic.
Following the conclusion of the expanded regular season, four teams will qualify for the playoffs. Postseason play in 2021 will see the return of a best-of-three format for both the semifinals and championship series.
The first-of-its-kind “Home Run Derby Wins It” tiebreaker returns for its fifth year in 2021. Once again, all regular-season FCBL games tied after one extra inning will be decided with a shootout-style home run derby.
Said Thompson: “We are looking forward to turning the page and having a fresh start … and continuing the tradition at Bullens Field.”
To view the complete 2021 schedule, visit thefuturesleague.com. Stay up-to-date on all the happenings of the local ball club at westfieldstarfires.com. Follow the Starfires all summer long on Twitter. – Information from the Futures Collegiate Baseball League was used in this article