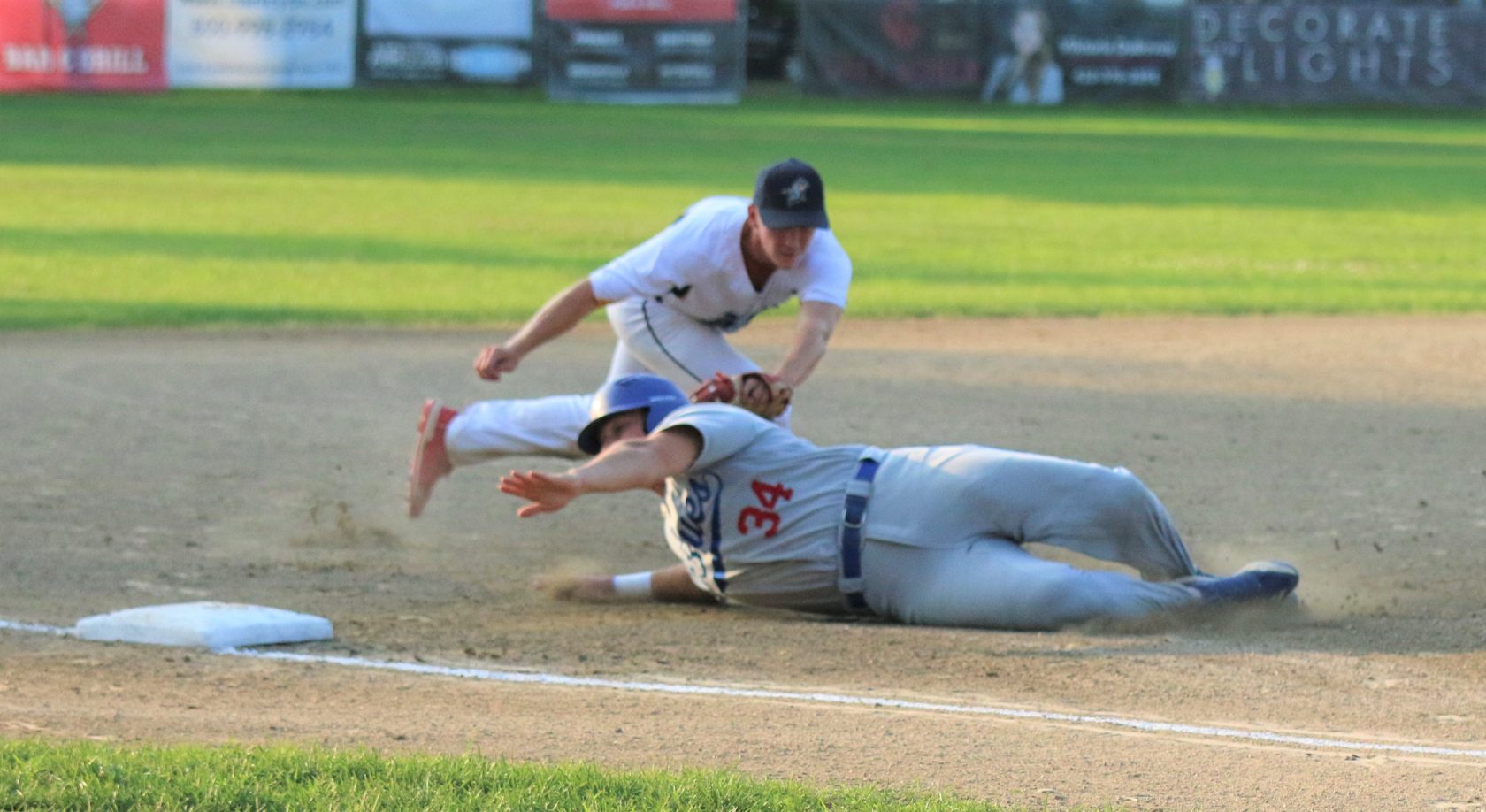 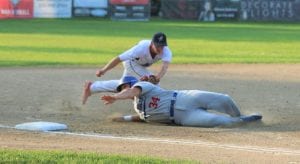 Devin Kellogg (17) looks to make the out at third against Bristol Friday night at Bullens Field. (Photo by Kellie Adam)

WESTFIELD – At first it appeared that the Westfield Starfires might recreate some of their late-inning home field magic at Friday’s night’s Futures Collegiate Baseball League game against Bristol, but in the end, they were left feeling blue.
The Bristol Blues scored six unanswered runs, exploding for five runs in the eighth inning to surge past the Westfield Starfires 12-5 Friday night at Bullens Field.
Bristol (24-20) jumped out to an early lead, exploding for five runs in the top of the second. Kasey Bass was hit by a pitch to begin the inning. Zeke Diamond followed with a double. With two outs, Griffin Schneider reached on a dropped third strike and scored a run. Austin White walked to load the bases. Starfires pitcher Leif Bigelow walked in another batter, Blues’ Christian Beal, for a 2-0 lead. Brandon Miller drilled a ball to right-center field that resulted in a ground-rule double and a 4-0 advantage. Kyle Maves smacked a RBI single to make it 5-0.
Westfield (14-32) wasted no time at all in recouping some of those runs. In the bottom half of the inning, Matt Costanza and Elijah Dale hit consecutive singles. With two outs, Devin Kellogg drilled a two-run single through the left side. A ground-rule double from Thomas Joyce pulled the Starfires to within 5-3.
Bristol bounced back with a run in the fifth. Maves and Bass led off the inning with back-to-back base hits. Bigelow forced the next batter into a 6-4-3 double play, but a run still scored.
Westfield continued to battle back.
In the bottom of the seventh, Danny Crossen singled and Kellogg was hit by a pitch. A one-out wild pitch allowed one run to score. Westfield native Sean Murphy clubbed a hard-hit ball up the middle to cut his team’s deficit to 6-5.
The game got away from Westfield in the eighth inning. White led off with a single and after a fly out, stole second. Starfires pitcher Vincenzo Camera was then tossed from game, apparently for voicing his displeasure over the umpire’s “safe” call.
The bullpen imploded a bit after that.
Miller lofted a sac-fly to center field for Bristol’s seventh run. An infield error led to another run. Maves singled. Bass was hit by a pitch. Diamond drove a hard hit ball up the middle, scoring a run. With two outs, Westfield nearly tracked down a bloop single out along the left field line, but the ball hit the mitt of the diving outfielder and scooted into foul territory, allowing two runs to score to make it 11-5.
Bass added a run-scoring double in the ninth inning.
Westfield returns to action Saturday in a double header against the Worcester Bravehearts (22-22) Saturday. The first of two seven-inning games begins at 3 p.m., followed by the nightcap at 6:30.