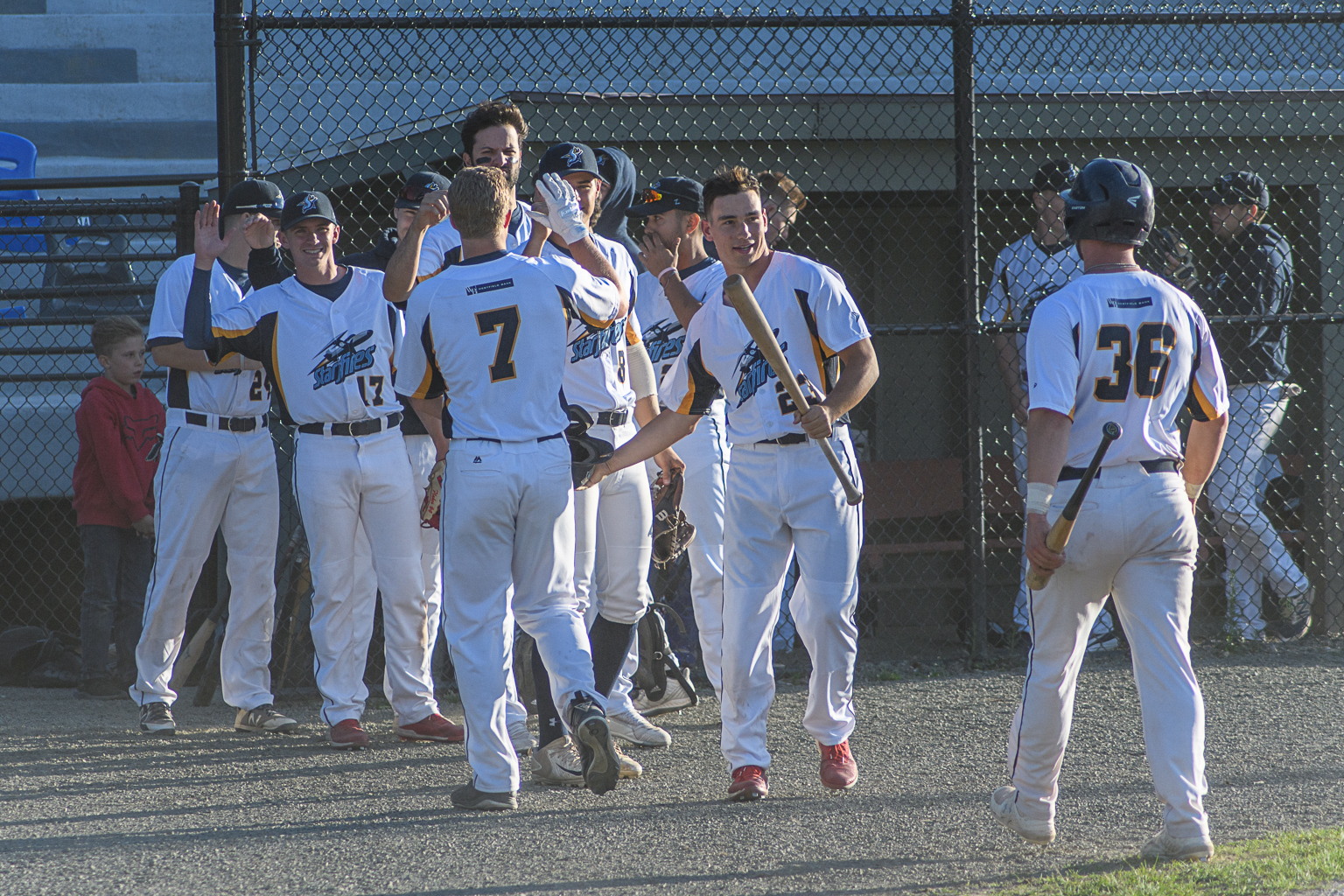 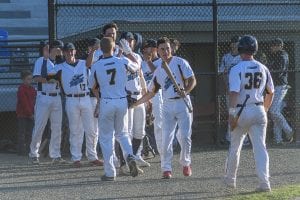 Andrew Ciacciarelli (7) is congratuled by teammates for a run early in the game (Photo by Marc St. Onge).

WESTFIELD – After starting off the inaugural season with four straight losses, the Westfield Starfires picked up their first win in franchise history against the Pittsfield Suns on Monday night, 7–4.
It is an exciting feat for the Starfires organization, which marks the beginning of a new era in Westfield baseball history, and Bullens Field.
Westfield was able to get ahead right away, recording four runs in the first three innings while the Suns could not capitalize until the fourth inning. The Starfires credit putting runs across early on as the biggest key to the victory. Starfires pitcher Jeremiah Vargas, who threw three innings for Westfield, noted that attacking first is crucial.
“The key to tonight’s win was definitely getting on top of them early,” Vargas said. “which is something we haven’t really done. It was huge.”
Vargas said that getting the win was a very special moment for the team, being that it took some blood, sweat and tears to finally solidify a victory.
“Getting the first Starfires win is amazing, especially because we’ve been waiting a few days to get it; it’s a really good feeling.” Vargas said. “We have to keep that same energy from tonight going forward.”
Pittsfield recorded a few solid hits in the game with outfielder Mark Coley picking up a triple off of a hard hit ball to center field. Even so, the Starfires could not be knocked off their game and continued to carry the lead throughout the game.
Starfires shortstop Elijah Dale had two hits and two RBIs on the night, helping the team gain momentum that was vital to the success of the team as a whole. Dale echoed the importance of an early lead, stating that it is something that the coaching staff talks about frequently.
“Getting ahead early was big,” Dale said. “Coach talks about it a lot; you have to be first, because everybody has a plan until you strike first.”
With the Westfield Starfires first win written in the baseball history books, the team looks to continue that success moving forward. The future is bright for the Starfires as the inaugural season rolls on into the summer. – Courtesy of Audrey Gamble/Westfield Starfires