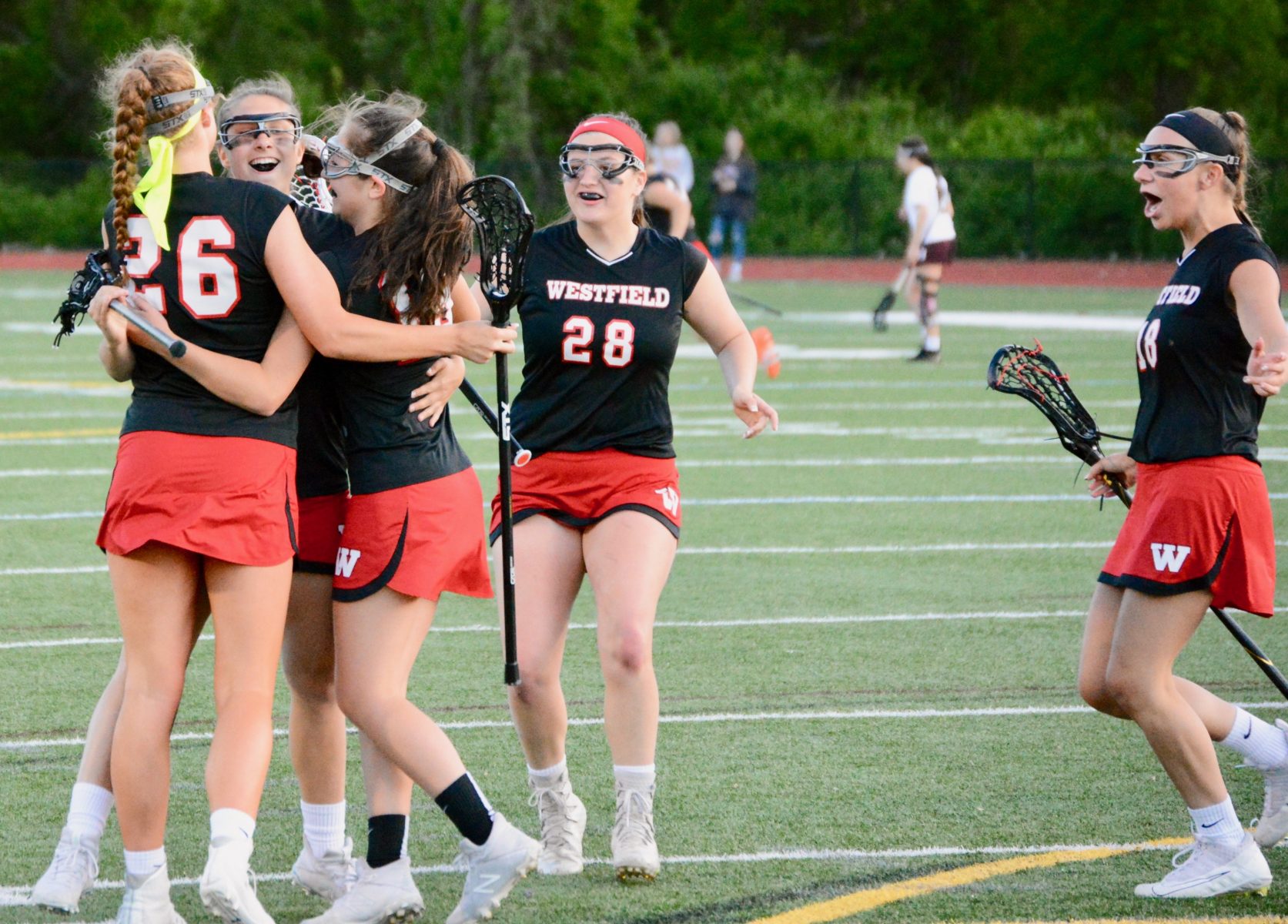 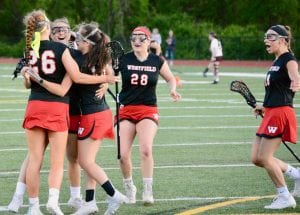 Smiles abound as Westfield celebrates a first half goal against Shepherd Hill during a postseason opener in high school girls lacrosse Monday in Dudley. (Photo by Chris Putz)

DUDLEY – The Westfield High School girls lacrosse team drove more than a hundred miles and ran thousands of yards to avoid a potential road block Monday.
No. 9 Westfield knocked off eighth-seeded Shepherd Hill 12-8 in the Central-West Division 1 tournament first round Monday night on the road. The Bombers survived the playoff opener with strong defense, solid goaltending, and opportunistic offense.
“It was about coming together as a team and not being selfish,” said Westfield girls lacrosse head coach Paul Fenwick, whose team netted eight assists on 12 goals. “The defense put the pressure on the ball and was relentless. That relentless pressure caused a lot of turnovers, and kept giving us the opportunity to go down and score.
Emma Metcalf, Kylie Buchanan, and Lara Finnie scored three goals apiece to lead Westfield (13-6). Metcalf also had two assists. Bombers’ Jordan Kowalski contributed one goal and three assists. Samantha Kaubras finished with one goal and one assist, Samantha Gustafson scored a goal, and Mackenzie Liptak and Olivia Hadla each had an assist.
Jordan Kowalski won the majority of her face-offs for Westfield, allowing the Bombers offense to set up several goals.
“Possession is everything,” coach Fenwick said. “We just had many more opportunities than them.”
Skylar Pietz netted three goals for Shepherd Hill, the first of which came in the first half for her 300th career point.
Westfield made sure their opponent did not have much more to cheer about, allowing just one other player to record more than one goal – Shepherd Hill’s Claudia Bonaventura (2 goals). Bombers’ goalie Liz Clark directed the defense in front of her and made six saves.
Westfield kept its offense in high gear, even in the waning minutes, scoring a shorthanded goal (Kowalski) on a play set up by Metcalf.
“We wanted to make sure the ride was worth it,” Fenwick said. “That was the goal – let’s not leave empty handed.”
Westfield’s reward for the opening round victory is a trip to Longmeadow to take on the top-seeded Lancers (13-4-1) in a quarterfinal match Wednesday.